Charlotte runs all over UMass in 52-17 win 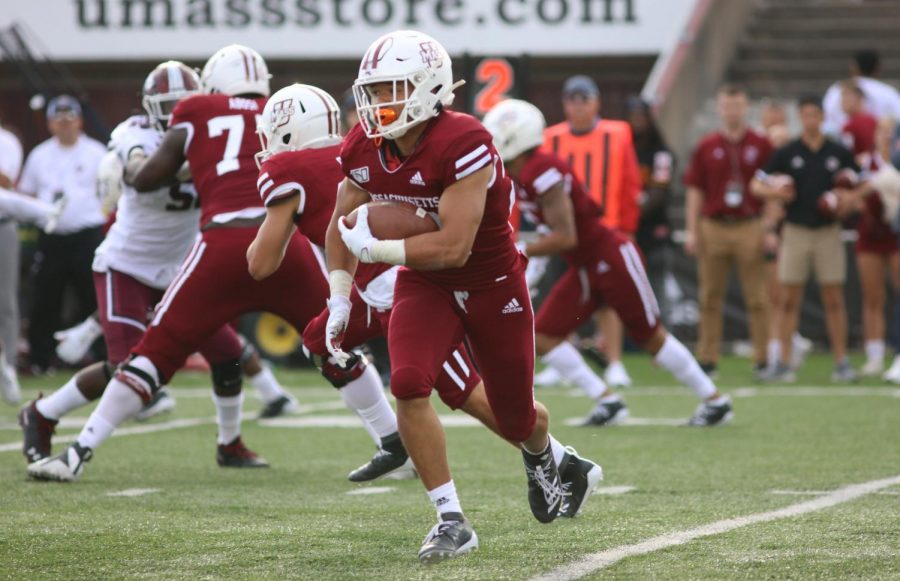 One week after a 45-20 blowout loss to Southern Illinois that was called arguably the worst loss in program history, the Massachusetts football team missed its chance to change the narrative.

Against a Charlotte team that the Minutemen beat 49-31 in 2018, UMass’ young defense was shredded by the 49ers. The Minutemen (0-3) trailed by 28 less than two minutes into the second quarter and never recovered en route to a 52-17 loss.

Charlotte (2-1) scored on its first two drives before Andrew Brito, starting for the Minutemen for the first time, threw a pick-six to Henry Segura with four minutes left in the first quarter to give the 49ers a three-score lead that proved insurmountable.

Brito’s slow start – the junior was 2-of-5 for 12 yards with an interception midway through the second quarter – hurt the Minutemen, but not nearly as much as a defense that allowed 190 yards in the first quarter alone. By the end of the night, UMass’ porous defense had given Charlotte 338 yards rushing and 533 yards of total offense, for an average of 9.5 yards per play.

After mustering just 16 yards in its first three drives, the UMass offense finally got going near the end of the second quarter, culminating with a three-yard touchdown from Brito to Jermaine “O.C.” Johnson with just 17 seconds left that cut the lead to 28-10. But once again the Minutemen were unable to shut down an opponent before the half, and those 17 seconds proved more than enough time for Charlotte to drive into range for a 53-yard field goal off the foot of Jonathan Cruz.

All told, UMass recorded just 262 yards of offense, 135 of which came on the ground. Brito finished 18-of-27 for 127 yards with a touchdown and an interception, taking five sacks, and the Minutemen went just 3-for-14 on third downs. But on the bright side, rushers Bilal Ally and Cam Roberson recorded 132 yards on 28 attempts, for an average of 4.7 yards per carry.

Nothing short of a heroic effort from the UMass offense would have delivered the win, however, as Charlotte marched up and down the field. Charlotte scored on six of its first seven drives to put the game well out of reach midway through the third quarter.

In their first three games, the Minutemen have lost by an average of 29 points, never scoring more than 21 and never allowing fewer than 45.

Still looking for its first win of the Walt Bell era, UMass will return to action against Coastal Carolina in Amherst on Sept. 21.