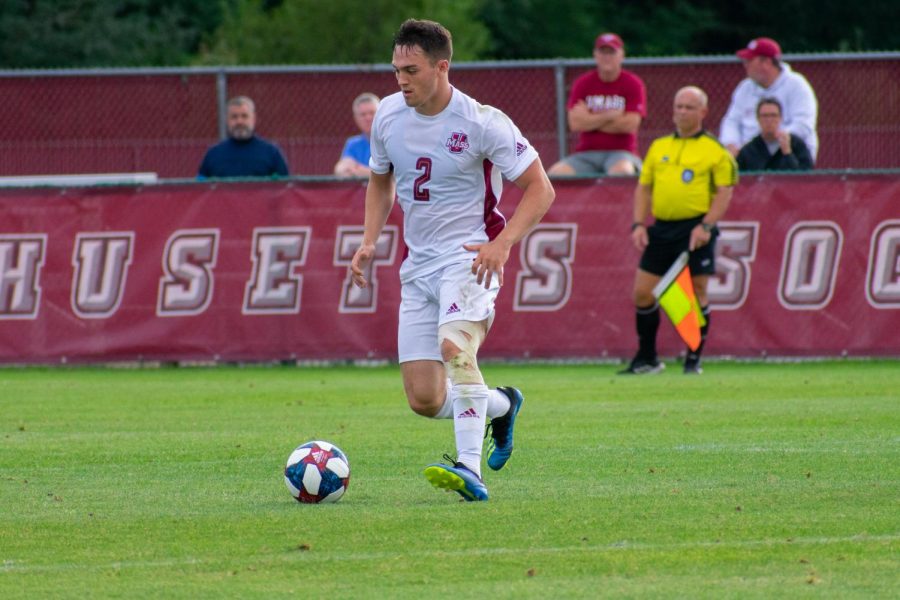 Tough defensive play proved fruitless due to constant fouls as the Massachusetts men’s soccer team lost their second game of the season to Bryant University.

“[I’m] obviously disappointed to give up a one-goal lead in the second half and come out with nothing,” UMass coach Fran O’Leary said. “I thought our guys worked very hard throughout the game, but we gave away two bad goals which isn’t like us.”

The Minutemen (4-2-0) were in control for most of the game as sophomore James McPherson scored in the 53rd minute to give UMass a 1-0 lead. All was well until Bryant (2-3-0) midfielder Charles DeSantis scored on a somewhat lucky free kick deflection to tie the game up in the 66th minute.

“On the first goal, the guy took a shot. It was probably heading wide, and it just deflected,” said O’Leary. “That one you can jot down as bad luck.”

UMass continued to play hard, but they were not ready for a counterattack in the 74th minute that resulted in a goal from Bryant forward Alex DaCosta.

“[On the second goal], we didn’t have position or discipline, we weren’t in the right spots to box out a counterattack,” O’Leary said.

In the first half, UMass out-shot Bryant eight to five, but the game remained scoreless. In the second half, there was less shooting but more scoring as Bryant out-shot UMass six to three.

“It was a disappointing loss, we had some weaknesses exposed,” O’Leary said. “We’ll set to work tomorrow to fix them before conference play begins.”

Despite the loss, the trend of good performances from the Minutemen’s younger players continued Tuesday as McPherson scored the lone goal for the Minutemen. McPherson attempted three shots and freshman Quinn Serafino attempted one and was very close to scoring if not for Bryant goalkeeper Oliver Larente’s save. Larente finished the game with four saves, as did UMass goalkeeper Marvyn Dorchin, who matched his second-best save total of the season despite allowing two goals.

“All the young guys carried themselves well,” O’Leary said. “We ask these young guys to go in to tough games – often up against juniors and seniors – and I thought we did well at times today. Not just the freshmen, but all of us lacked a little composure and game sense in managing a 1-0 lead on the road so we’ll learn from that. It was a little lack of experience and composure that probably caused the result today.

“If we learn from [the loss], which I am very confident we will, it will leave us in good shape going into the conference. I think you look back on both your wins and your losses at the end of the season to determine the value. If you have a big win and you can’t back it up with other wins then the win really isn’t that big. If you lose one and you learn from it, it can maybe help push you on to extra wins in the conference. It’s a little early to judge a win or a loss right now, but I’m confident our guys will bounce back.”

Perhaps UMass’s biggest problem Tuesday was their fouling. The Minutemen had 16 fouls, one of which resulted in the game-deciding free kick.

“We’re a very honest team,” O’Leary said. “We played a lot today with our hearts and maybe gave away too many free kicks to invite pressure on ourselves, so we’ll just look for a little bit more composure and to use our brains in defending. Defending is a combination of physical bravery and desire and intelligence. Today, we were definitely brave, we had a huge desire, but sometimes the decision making let us down, so we’ll work to improve our decision making in the coming days.”

The Minutemen will look to rebound from the loss Saturday at home against UMass Lowell. The game will be their first at home since Sept. 7, as the Bryant game was their last of a three-game road trip.

Michael can be reached by email at [email protected] and followed on Twitter @MichaelTowns777.