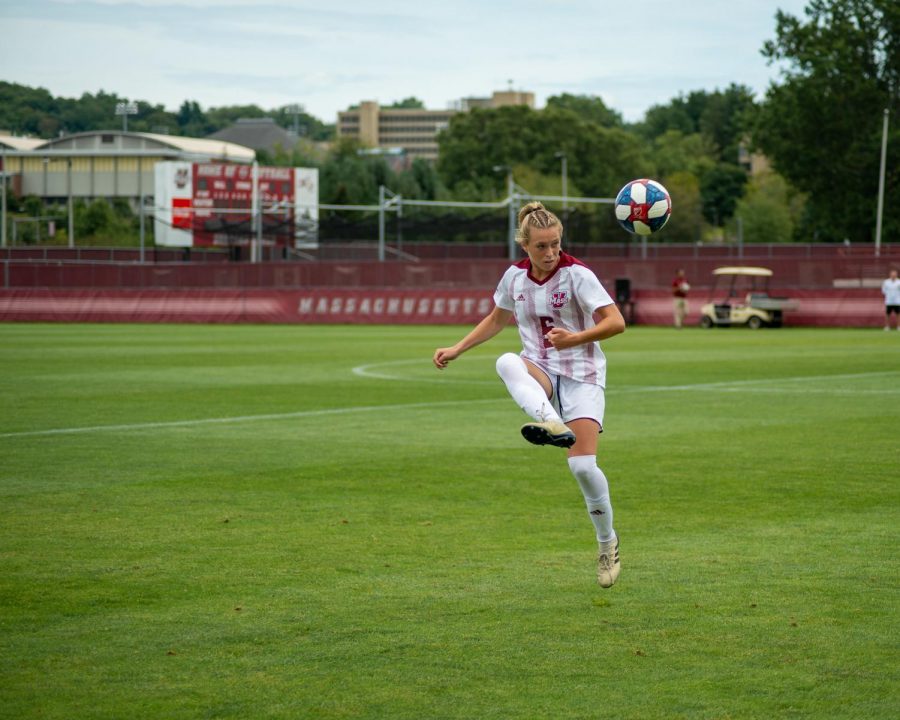 Rebeca Frisk scored two goals, including the game winner, coming off the bench to give the Massachusetts women’s soccer team a victory in a 3-2 nail-biter over Siena on Thursday. With the win, the Minutewomen stretched their unbeaten streak to four games.

UMass (3-1-1) spoiled Siena’s (0-5) home opener while adding another loss to the Saints’ so-far winless season. Frisk’s game-winning goal came just in the nick of time, giving the Minutewomen the advantage in the 78th minute.

“[Frisk] is a really good leader on the team,” coach Jason Dowiak said. “Her attitude has been excellent the last two games to come into a role that was a little different from last year, coming in off the bench. She really has a great spark to her—to energize us. Her very first touch of the game today was a goal, which is always exciting, and then [she had] just another amazing finish to get the game-winner.”

While UMass’ stat sheet has been dominated by players like Melissa Kössler, Lauren Bonavita and Ansley Frazier, Frisk asserted herself as a potential offensive weapon for the Minutewomen in games to come, notching a goal in the 25th minute in addition to the game-winner.

“She’s been different in training,” said Dowiak. “We talked with her a lot in the first month-and-a-half or so, and now that work is starting to really show.”

Kössler, UMass’ leading point scorer with six, wasn’t able to add to her season total Thursday, but the international transfer from Germany did put up a team-high five shots on net for the day.

“Melissa is a high-, high-level striker,” said Dowiak. “[She competed on] the U19 national team for Germany and was their leading goal-scorer … she simply knows how to find the net and knows how to find it in a lot of different ways. She can get in behind [the defense]; she’s quite fast. She’s also very strong—she’s about 5’11”—enabling her to hold players off and really use the body to her advantage … so, yeah, she’s going to be a big-time target for us this year.”

Although UMass never trailed, Siena matched every goal the Minutewomen put on the board until the end, when Frisk’s last-minute goal left too little time for the Saints to answer.

“[Siena] came out putting really high pressure on us,” Dowiak said. “It was tough. We scored early, which was nice, but then we settled in a little too comfortable. We kept giving them opportunities and a lot of those opportunities came from their hunger for wanting to get that first win.”

Nissa Pereira, a regular starter with 327 minutes of play on the season, led the UMass bench in minutes against the Saints, clocking in at the 25-minute mark. She tacked on two shots of her own in what was a defining day for the UMass substitutes.

“For [Pereira], we’re trying to rest her legs a little bit because of those high minutes,” said Dowiak. “So, that was kind of the strategy for the day. We also have a good situation right now where there’s a lot of players starting to perform well, and we want to reward them … when we get the opportunity to rest a player that has a lot of minutes under their belt, it’s a real blessing.”

The Minutewomen will be back in action on Tuesday at Harvard. The game is set to start at 7 p.m.