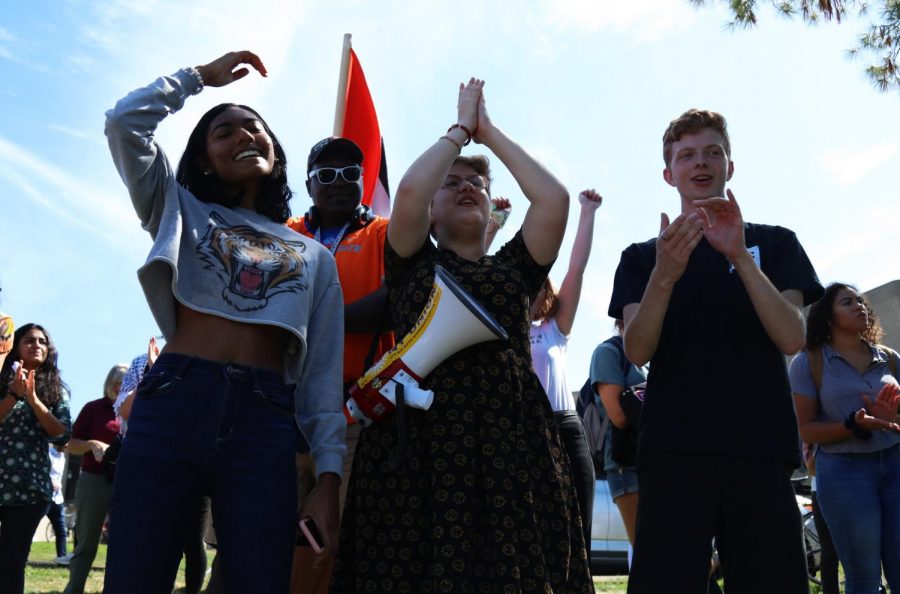 On Friday, Sept. 20, students at the University of Massachusetts walked out of their classes to join the millions of people around the world protesting climate change and calling for stronger climate action from their prospective governments.

Globally, more than 130 countries hosted protests and strikes from thousands of locations.  The strikes will continue across countries from September 20 to the 27. At UMass, the climate strike took form in the UMass Walk Out for Climate.

“We’re in a state of climate emergency. On September 20th, we stand in unity with youth, adults and rebels all over the planet,” the organization said on the event’s Facebook page.

The event was led by the University’s chapters of the Sunrise Movement and Extinction Rebellion along with many other local organizations concerned about climate change. The strike took place on the East Pond Lawn.

On campus, students flooded the lawn around noon, waving flags and carrying flags while chanting messages such as “the seas are rising” which was responded to with “but so are we.”

The chorus of one song encouraged the crowd to take action: “You can, I can, make a climate healing plan, you can, we can, heal our world.”

Nadia L’Bahy, a UMass biology and informatics student and a hub-coordinator of the Sunrise Movement, listed the demands of the strike, saying, “We strike to demand a future present that can provide food, clean water and clean air for everyone. We strike to demand that our nation adopt a green new deal to adopt clean energy, clean infrastructure and create millions of new jobs in the process.”

According to the organization’s website, the Sunrise Movement is “building an army of young people to make climate change an urgent priority across America, end the corrupting influence of fossil fuel executives on our politics and elect leaders who stand up for the health and wellbeing of all people.”

“We are not looking to the right or left. We look forward. Together, we will change this country and this world, sure as the sun rises each morning,” the Sunrise Movement says.

Jai Fuller from Leverett, Mass. brought her four-year-old daughter Nam Bani and her 12-year-old son Amardas to the strike, signs in tow.

“They’re the future and I think they should know what’s going on,” Fuller said simply.

Jackson, a student at Amherst-Pelham Regional Middle School, gave a voice to the many younger students attending the event.

“Today, I feel like it is necessary for me to speak up. Usually I’m worried about my voice not being heard and usually it isn’t, but I’m not the only one not being listened to. Our beautiful planet, our Earth, our home is not being heard,” Jackson said. “It’s time we speak up, it’s time we are listened to maybe not by President Trump but by others in the world. We can help others change. The climate isn’t the only thing that’s going to change, we need to change too.”

State Representative Mindy Domb and State Senator Jo Comerford also made appearances. Since being elected in January, Domb has pushed for many crucial issues including environment protections. Domb’s goals include going 100 percent renewable by 2050, supporting state-funded public health research into the impact of fossil fuels and methane and enforcing and supporting legislation to protect clean air, clean water and natural resources.

Together, Domb and Comerford are pushing for Governor Charlie Baker’s Climate Resistance Bill which will push for green and clean energy, continue Amherst’s “solar revolution” and create jobs, stimulating the economy. In addition, Comerford discussed the Net Zero Energy bill that would force all buildings to be powered with green energy and technologically up to date.

House Speaker Robert DeLeo has additionally proposed the GreenWorks bill that calls for a 10-year bond bill at $100 million per year that would fund a range of energy efficiency and climate adaptation measures.

The global climate strike was inspired by 16-year-old Greta Thunberg who first began protesting climate change last year in Sweden. Since then, Thunberg has become an international symbol for climate change, testifying before the U.S. Congress and speaking at the U.N. climate change conference in Poland. Time Magazine featured Thunberg on the cover in May, naming her as a “next generation leader and featuring her on TIME’s Influential People of 2019 list. On the day of the protest, Thunberg spoke and attended the march in New York City.

“We need to focus every inch of our being on climate change, because if we fail to do so than all our achievements and progress have been for nothing and all that will remain of our political leaders’ legacy will be the greatest failure of human history. And they will be remembered as the greatest villains of all time, because they have chosen not to listen and not to act,” Thunberg told the European Economic and Social Committee in February.

Emmalie Dropkin with Extinction Rebellion ended the event with listing the requests the organizations are asking of the University. These requests include acting now and developing comprehensive plans with community input for complete divestment and carbon neutrality by 2025 and educating students on environmental science and how the climate emergency will affect their careers, their lives, and the lives of other people on our planet.

“This is a question of survival. Depending on what we do, as a community, there will be first year students arriving fifty years from now – or there won’t … This is one of the moments in history when we must act without any guarantee that what we hope for is attainable,” Dropkin said. “We must act anyway.”