The Massachusetts Farm Bureau Federation Hall, the focal point of the surrounding farmland 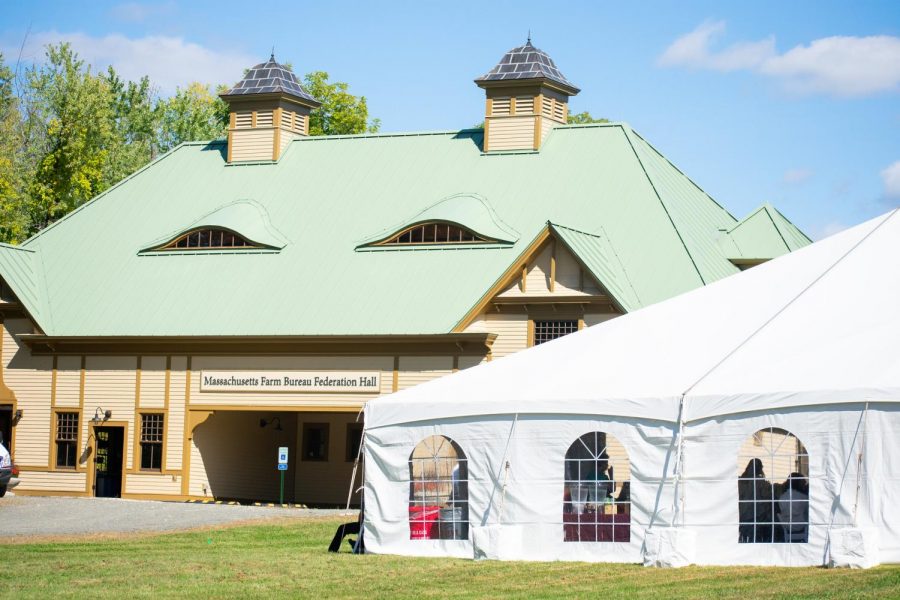 The Queen Anne style structure, first built in 1894, was systematically dismantled from its former location on Grinnell Way, just west of South College near the core of campus in 2017 and relocated to its current location on at the ALC, off of North Pleasant Street.

“It’s really a short distance from Grinnell Way to [the ALC], but it’s been a long journey because this was one of the first projects that I got involved in when I became chancellor,” said Subbaswamy, the chancellor of the University since 2012.

“In my line of work, I’m fortunate to be involved in a lot of exciting projects and this is definitely one of them,” Subbaswamy said. “This beautifully restored piece of campus history, now providing an experiential classroom for our students, seems to effortlessly connect our past to our future.”

Many speakers at the ribbon cutting, including the Chancellor, UMass Trustee Mary Burns and Tricia Serio, the dean of the College of Natural Sciences, harkened back to the historical connection between UMass’ roots as an agricultural college, established in 1863, under the Morrill Land Grant Act and the new life of the historic horse barn as the home base for the farming students of today and the future.

“[T]his work has never been more relevant as our global society increases its focus on areas such as food supplies, sustainable agricultural production and climate change,” Subbaswamy added. “The University is proud to prepare the next generation of leaders and experts, who will play a key role in discovering future solutions.”

The speakers took the podium under a white tent beside the replicated 1894 barn before the ceremonial ribbon cut took place in front of the barn, officially inaugurating its new mission.

Attendees at the event were greeted by a folk band featuring fiddlers and flautists as well as a horse-drawn carriage, courtesy of courtesy of Muddy Brook Farm in Amherst, a homage to the original purpose of the barn.

Wes Autio, the director of the Stockbridge School of Agriculture, detailed the structure’s long journey to its current role as the Massachusetts Farm Bureau Federation Hall.

“The horse barn began its life as a home for the Percheron work [horses] of the University at the time of Mass Aggie and it got an influx of additional horses in the 1940s when the U.S. Cavalry disbanded,” Autio explained.

“The barn itself was in full use until about 1991, the horses were then moved to the newly purchased Hadley Farm, which is out on North Maple Street in Hadley, just west of the [McGuirk Alumni] Stadium and then it began to deteriorate a bit,” he continued.

Before its reconstruction and relocation the barn was last used over a decade ago by the UMass Police mounted patrol until its eventual shuttered vacancy, according to UMass.

The building’s restoration effort results from the vision of key individuals at UMass such as Stephen Herbert, Tom Hastings and Steve Goodwin among them, who were the driving forces behind saving and repurposing the horse barn, according to Mark Amato, the president of the Massachusetts Farm Bureau Federation.

These individuals presented the idea of moving the barn to its current site to two of Amato’s predecessors, former MFBF Presidents Dr. Richard Bonanno and Ed Davidian. A deal was brokered where if the Massachusetts Farm Bureau could raise the sum of $500,000, the visionaries would advocate for the rest of the money to see it come to life, Amato explained.

“While in the end it was not feasible to move the entire building, the structure before us contains some pieces of the original barn including several stalls and some of the structural materials that support the building,” said Amato.

“The rest is a true replica of the original 1894 barn,” Amato added. “For example, the paint color was chosen from an analysis of paint chips from the old barn, the ‘eyebrow’ windows, the roof lines, cupolas and off-center passageway were recreated from old photographs.”

The 75-acre ALC, located on the former Wysocki Farm, had humble beginnings for its certified organic vegetable farm, which started in the summer of 2013 according to Amanda Brown, a lecturer in Stockbridge and the director of the ALC.

“That season our modest production plan for this site only included direct seeding 600 row feet of pumpkins,” Brown explained.

However, the site has since flourished over the last six years thanks to the devoted and tight-knit student farmers who are projected to wash and pack 50 tons of student-grown organic produce in the Massachusetts Farm Bureau Federation Hall this fall, bringing in a gross income of $100,000 according to Brown.

This harvest then reaches consumers in 10 wholesale markets on and off campus including an over 100-member Community Supported Agriculture program, Earthfoods Café, UMass Dining, four Big Y Supermarkets and the autumnal UMass Student Farmers Market, held weekly on the east Campus Pond Lawn.

“The Student Farm Food Access Initiative is a student-run organization that now recovers and redistributes excess food, already grown at UMass and in the local community and partners with local relief organizations to provide this food to those in need,” she said.

“[O]ur student farmers have donated over 20,000 pounds of produce to local hunger relief agencies in the past two seasons,” Brown added.

“On any given day you will find our students working closely with members of our faculty, honoring the learn-by-doing model of Levi Stockbridge,” Brown added. “In the fields behind me, we plant trees and forage for native pollinators, we trellis tomatoes, we raise chickens and sheep, we plant grape vines and extract honey among a million other things.”

When asked what it’s like working on the farm, especially now with the repurposed horse barn as its centerpiece, Mirabile explained, “It’s amazing, we harvest right out here early in the mornings at like 6:30 and it’s great to just have produce come straight to the barn where we can wash it and pack it and store it immediately. It’s so helpful to have a place close to campus that I can walk or ride my bike to.”

“During the dark early morning hours on the farm you’ll find the barn buzzing with activity, the radio blaring and the smell of coffee in the air as we work to wash and pack vegetables for that day’s order,” Mirabile’s instructor Brown said.

“In the summer, the shade of the barn is a cool welcome treat for our staff meeting or a quick lunch. The sunlight on the barn at dusk is stunning as we clean up and close the large sliding doors, knowing that the cycle will begin again the next morning.”