‘Dope on a Rope’ coming to Northampton 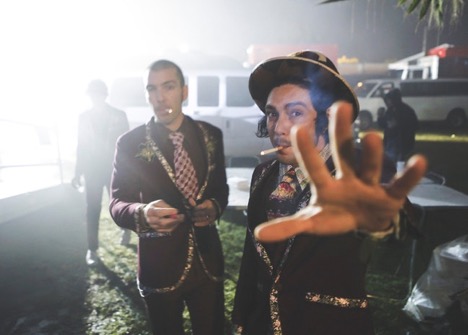 Hailing from the coast of southern California, The Growlers have carved their own unique path through the music industry since their formation in 2006. From living in warehouses to drinking excessively on tour, The Growlers have stayed true to their rebellious spirit. However, their signature reggae/disco/punk sound has constantly evolved.

Unlike most artists, their genre is not one that you’ll find curated on Spotify. The Growlers invented “Beach Goth,” a self-proclaimed comedic attempt to define their sound that has drawn influences across the music spectrum. Their recent albums experiment with a mix of West African, dance and electronic music — hardly a combination found in the mainstream.

With their two latest releases, “City Club” and “Casual Acquaintances,” the band has reached a wider audience due to an inclusion of pop sprinkled on top of their trademark garage aesthetic. The group recently saw a surge in popularity with “City Club” and their most popular song, “Dope on a Rope.” This success is partially due to the musical talent of its producer, Julian Casablancas, lead singer of The Strokes and The Voidz.

Their upcoming North American tour comes amid the release of their seventh album slated for the fall, titled “Natural Affair.” In an interview over the summer, lead singer Brooks Nielsen discussed the origins of the band’s name, the group’s collaboration with Casablancas and their upcoming album release.

The Growlers will perform at Pearl Street Nightclub in Northampton on September 11. Tickets can be purchased here.

Matt Berg: Have you been to Northampton before?

Brooks Nielsen: I don’t think we’ve played there, unless it was early on with Dr. Dog. We did a lot of East Coast stuff. Yeah, I don’t think so, but we’ve done Boston shows.

MB: I’ve watched a couple interviews and heard some different stories, but what’s the story behind the name ‘The Growlers’?

BN: It’s kind of silly. You know, when a band starts with a name and you get stuck with it. We were The Heebie Jeebies, and then I think we changed it to The Blooming Boom — kind of weird… around the time we started playing around with the idea of Beach Goth. It was like an alternative name.

MB: Speaking of Beach Goth, you’re the only band I know that is synonymous with the genre, a mix of surf, rock and disco, and you even named your own festival after it. How did this title come about, and how do you feel about it?

BN: I think we just thought it sounded funny, picturing the two together, making it literal. It made sense because we surfed and grew up in a beach area, but we weren’t following the actual surf world. We were more involved with the music world, living in our dark warehouses. And the music at the time had a lot of reverb and dark lyrics and songs in minor key, so it just made sense it a kind of goofy way. It just stuck with us.

MB: Who are some of your biggest influences?

BN: Those guys [the band members] were listening to reggae, so I fell in love with the old reggae guys first. I’d sing along to guys like Bob Marley and The Congos. Then, later, I got more into 1970s punk and really into lyrical guys like Bob Dylan.

BN: I’d say “I’ll Be Around.” It feels like a good change for The Growlers, it’s a lot more dance and Afro inspired.

MB: I heard that you guys had about 60 near complete songs while putting together “City Club.” How do you write so prolifically? What’s your usual process for making music?

BN: I mainly just shut myself away and put in the time… Matt [Taylor] writes stuff on his own, and I write stuff on my own. Then, we reunite after and see what we made and make sense of it all. But I don’t know. Before, I like to just read alone and get my vocabulary back in my head after getting all mushy from drinking too much on tour. And then I just lock myself away and keep jacking-up myself, ha-ha.

MB: “City Club” (and follow-up album “Casual Acquaintances”) were produced by the legendary Julian Casablancas of The Strokes and The Voidz. What was it like to work with him?

BN: He’s just a pro. It’s really natural — melody just comes really natural to him. We loved his music before, and we grew up listening to him in high school or whatever. It was cool to see first-hand that he can pick up a guitar and start playing guitar and passing the microphone around with everyone trying to make melodies and then he gets on the piano. That was a cool thing to see.

MB: How did you meet him?

BN: I don’t really know exactly, because things [in the music industry] are kind of like a scene in a way. I mean, he invited us to play some shows, and posted something about hearing one of our songs and liking it. Then we met him a couple times at a bar. I don’t really want to meet anybody, you know, just give everyone their face. Then, I think he asked my wife at a bar, ‘Hey, did those guys make any money yet?’ She said no, and he said, ‘I’m interested in doing a record with them.’ At the same time, we were looking to move around, so we went to Cult Records and went for it.

MB: That doesn’t sound too bad!

BN: Yeah, and we just did it again. We wrote some 60 songs, put them on a record and are releasing them.

MB: Do you have any new projects in the works?

BN: Yeah, we got a record coming out soon. I don’t know when right now, it’s so hard to figure out with all the business stuff. But I’d say in a couple of months we’re dropping a record. I feel like we confused ourselves, and there’s another big batch of songs we’re whittling down right now.

MB: How would you describe that record? Is it similar to your more recent releases, or is it more like your earlier stuff?

BN: There’s similarities to “City Club,” but I think it’s cleaner. It’s just Matt and I. There’s a little bit for everyone and these days I’m thinking more about the fans and everybody rather than before it was only about me. I didn’t care what anybody thought.

MB: What direction, if you have any idea, do you see the band heading in? Or do you just go with the flow?

BN: It’s unspoken, between Matt and I and the band. It’s almost taboo. The feel just has to come real natural, but I feel it in the records. It feels like a slow growth to me. We’re just getting a little bit better at everything, and I don’t know, I still got a lot of emotional complaining to do all over the songs. It’s working out. It’s a nice slow growth, and I don’t know exactly where we’re going, but hopefully we last as long as we can, you know. These fans don’t last forever, and we’re happy right now.

MB: And the final question: What is one piece of advice you’d give to college kids trying to start a band?

BN: I don’t know how successful we are to look at, but if you get opportunities, you’ve got to be prepared. Be serious, take yourself seriously and be open-minded and try to get along with your people. For us it was a long, slow process, and I don’t think I ever wanted anything overnight, and we sure as hell didn’t get it. It’s a grind like anything else. Put your time into it, and make sure you really love what you’re doing. A lot of the people that I see falling apart are the ones that are ingenuine.

MB: Well, you guys have been around long enough to know this stuff. About 13 years, right?BN: Yeah, it’s definitely doable. You just got to push, and it’s not for everybody. People don’t understand that it is a job. Sometimes people join a band because they don’t want to work. Well, listen, it’s a business, and the entertainment business is a grind.