School shootings are not your art

Bstroy’s fashion line is deeply troubling for our nation 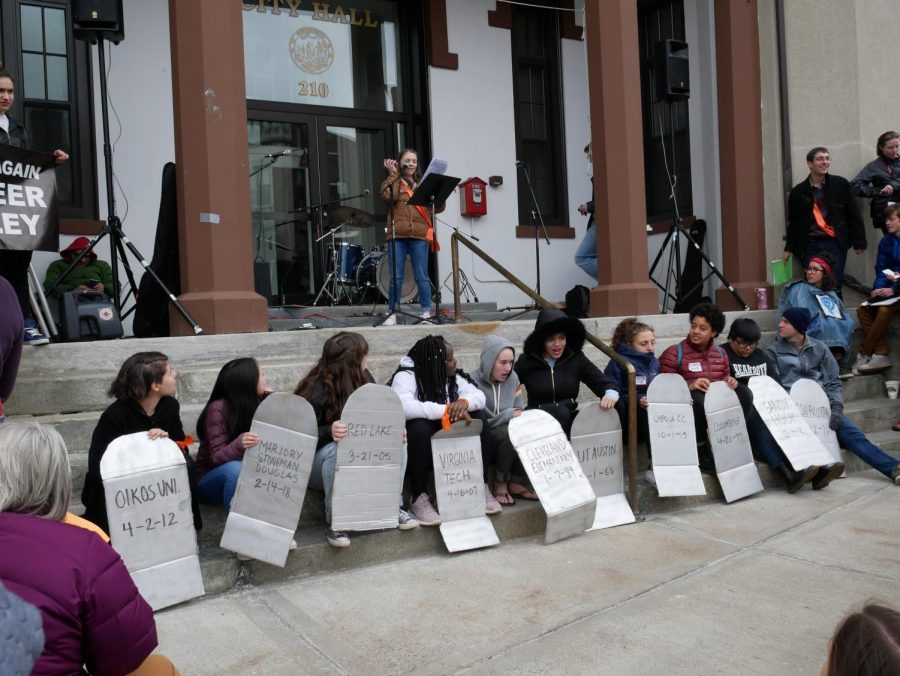 Sandy Hook, Columbine, Marjory Stoneman Douglas, Virginia Tech. These are all well-known names of the schools where the deadliest school shootings that have occurred in the United States within recent years, and their names are synonymous with grief, fear and trauma for many in our nation. These events have brought about positive change by sparking protests against gun violence and pressuring the government to take action. However, the shootings are still symbolic of the pain of victims and the suffering of our country as a whole from gun violence.

Bstroy, an American fashion brand, recently released a new clothing line named “Samsara,” drawing upon these school shootings as inspiration. The collection, which was posted on Instagram last week, features several different sweatshirts decorated with the names of the schools with scattered holes and rips throughout. Last Sunday, Bstroy founder Brick Owens posted a photo on Instagram describing the new line’s backstory. Owens describes the irony of school shootings, and how they are a reminder of “life’s fragility, shortness, and unpredictability,” but also its “infinite potential.” “Samsara”, Owens said, is the path to finding nirvana, or peace, from destructive habits.

News of the fashion line sparked outrage and controversy, with victims and survivors of these traumatic events speaking out for themselves over social media. One account dedicated to memorializing one of the teachers killed in the Sandy Hook shooting stated, “Our pain is not to be used for your fashion.” However, other users stated that this kind of art should fuel conversation around gun violence in school shootings and in a broader context for our world today.

Of course, like any violent act, the Sandy Hook, Columbine and Virginia Tech shootings are extremely moving and could provoke artistic vision. Bstroy decided to portray this vision in a way that is insulting and degrading to the victims of the events as well as to the nation as a whole. Instead of creating a powerful statement, Bstroy created fashion that made light of the problem and put violence on the runway as entertainment.

The way Bstroy chose to interpret its ideas about gun violence was done in an appalling and deeply ignorant way. Gun violence is not fashion. Especially in assumed sanctuaries like schools, gun violence is traumatic and deeply horrifying — not simply “ironic.” Creating a “school shooter” look with distressed clothing and purposeful bullet-like holes is not only disrespectful to the victims of gun violence but also perpetuates harmful stereotypes to what people believe a school shooter would look like, often portrayed in films or media as depressed or troubled, which is not always the case.

Bstroy’s “Samsara” line is equivalent to designing a clothing line based around other mass killings in history. While it is important to remember these events, depicting them through fashion is not the right way to offer hope during a dark time.

The creators of “Samsara” state that they simply wanted to “comment on gun violence and the type of gun violence that needs preventative attention.” While the sweatshirts were originally not being sold, the designers are considering putting them for sale due to the response to the original collection. Creating these sweatshirts for artistic purpose was questionable enough, but now Bstroy may be profit off of their insulting designs.

The reveal of the line comes out around the same time that Sandy Hook Promise, an organization created after the school shooting dedicated to the prevention  of gun violence, released a video titled “Back to School Essentials.” This deeply chilling video promotes taking preventative measures and educating students about how to protect themselves during school shootings. The video is just one example of how art, such as film, can make powerful statements about gun violence without downplaying the tragedy of the events.

Bstroy has not given an official apology statement to victims and their families, nor have they taken down the images of the sweatshirts on their Instagram account. The company’s lack of response to the controversy makes it seem as though they simply do not care about how their “art” affects others, which, to me, seems like one of the most important values of a creator. Bstroy may say that they wanted to “make a comment on gun violence,” but that is a weak excuse in defense of an insulting and ignorant design. I deeply hope that no one, especially not students, would ever wear any of Bstroy’s clothing or support their company.

Alanna Joachim can be reached at [email protected]