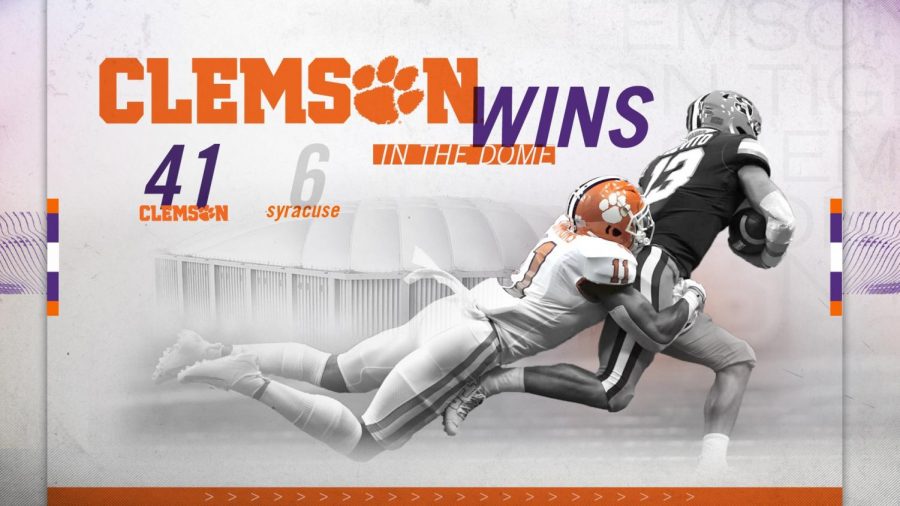 Led by standout sophomore quarterback Trevor Lawrence’s 395 passing yards and four total touchdowns, Clemson rolled through Syracuse without a problem, with the game ending in a 41-6 blowout. The No. 1 team in the nation put up 14 points early and never looked back, not allowing Syracuse to reach the end zone, settling for only two field goals.

Although Lawrence shined, this one was all about defense for the undefeated Tigers (3-0), holding the Orange (1-2) to a measly 187 total offensive yards.

The Orange struggled throughout the game, especially when it came to the running attack, as they gained a total of 15 yards on 42 running plays for a horrendous 0.4 yards per carry. The defense also struggled to stop the well-oiled machine of Clemson’s offense, as the Tigers accumulated 612 total yards.

Syracuse and Clemson had split wins in the previous two seasons, but this win showed a clear gap in the two teams’ talent level.

The Tigers will head back home to face Charlotte (2-1), who is coming off of a 52-17 blowout win of their own against Massachusetts. Syracuse will stay at home to host Western Michigan, who beat down on the Georgia State Panthers 57-10 to reach 2-1 on the season.

Jalen Hurts showed yet again why he is right in the thick of the Heisman race with yet another impressive game. The Alabama transfer threw for 289 yards, ran for 150 more, totaled four touchdowns and avoided an interception for the third time through three games.

Oklahoma and their number one offense in the country got off to a hot start, scoring the first 17 points of the game, eventually leading by a score of 34-7 at halftime. Oklahoma wideout Charleston Rambo totaled five catches for 116 yards and two touchdowns on the night.

Chip Kelly finds his Bruins team struggling yet again to start 2019, as UCLA has a 3-12 record under Kelly.

No. 9 Florida pulls past unranked Kentucky 29-21

In a game that saw many turns, Florida finished on top despite losing junior starting quarterback Feleipe Franks in the third quarter with a dislocated ankle.

Through three quarters, the game looked like it was all Kentucky. After Franks’ injury, the Gators (3-0) went on a 19-0 scoring run to come back from down 11 and seal the game.

Backup quarterback Kyle Trask stepped in for Franks after his injury and held his own,  completing 9-13 passes for 126 yards while also running in the go-ahead touchdown in the fourth quarter to put the Gators ahead 22-21.

The Wildcats (2-1) had a chance to take the lead on the next possession, but freshman kicker Chance Poore missed a 35-yard that would’ve put Kentucky ahead by two. Florida capitalized on this opportunity, as senior Josh Hammond took an end around 76 yards to the house to put the Gators up by 8.

With 33 seconds remaining and one timeout left, Kentucky couldn’t pull off the miracle, as backup quarterback Sawyer Smith threw up a last second prayer that was intercepted for the third time of the night to close out the game.

The Gators will head back to Gainesville for a home matchup against Tennessee (1-2). The Wildcats will be on the road for week four as they will travel to face Mississippi State (2-1).

Joseph Aliberti can be reached at [email protected]