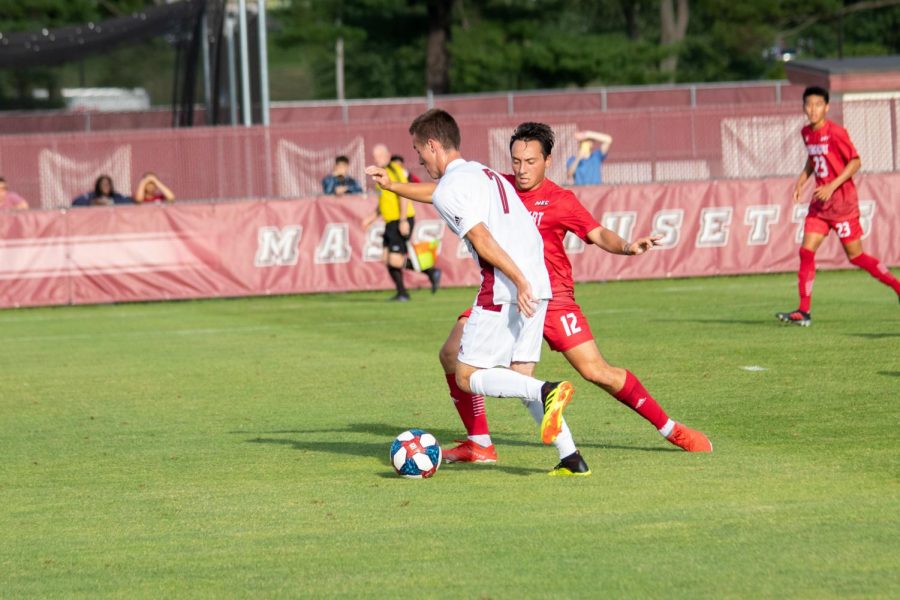 No cracks were found in the vaunted UMass Lowell defense as the Massachusetts men’s soccer team lost the UMass Derby 1-0 at Rudd Field Saturday.

Although the Minutemen (4-3-0) had a couple hard-earned looks, including a crossbar hit off freshman defender Benjamin Wiemann, they failed to convert in a matchup that proved as physical as expected. The loss of junior Eli Cronin created a challenge for the Minutemen, but younger players provided a valiant effort that kept the game tied for 64 minutes.

“We had a couple of missed chances,” coach Fran O’Leary said. “We hit the crossbar with four minutes to go, so it was a combination of a little bit of bad luck and a little bit of poor finishing, maybe cost us the result. I feel so bad for our guys. They competed against a very experienced group of players and matched and bested them at different phases of the game. In all of our losses this season we’ve hit the crossbar, so we’ll need Lady Luck maybe to turn a bit, but I thought our guys acquitted themselves very well today.”

UMass Lowell, a ranked team last season, has a formidable defense that includes players from all over the world. Starting defenders Ivan Blaskic and German Fuentes are both 6’4”, and both have ample speed and experience. The size and speed of the River Hawk defense accounted for one of the toughest tests the Minutemen have encountered all season up to this point.

“I thought our wide guys got around [the UMass Lowell defense], we delivered several dangerous crosses, just maybe lacked a little bit of quality in the final touch and our composure,” O’Leary said. “I thought our passing was very good today, there was a good balance between us playing long balls and we also connected well today, so from that perspective it was a big jump forward for us. Now we’ve got to go out, lick our wounds, dust ourselves off, get ready for Tuesday and one big guy on Dayton next weekend.”

With Cronin injured, several young players were integrated into larger roles than they have held up to this point in their collegiate careers. Freshman Logan Brown, who has seen a decent amount of playing time as a backup in 2019, made his second career start in the midfield.

“I thought Logan was very good,” O’Leary said. “He’s competitive, mature, probably beyond his years, nothing fazes him, he’s brave, guys love him – I think he handled himself very well for a first start.”

Brown, who has two goals on the season, is part of a group of freshman players that have earned significant playing time this season. Forward Quinn Serafino, who also started, and midfielder Ryan Levay have stepped up for a Minutemen team that has been plagued by injuries all season, including the preseason loss of Yosuke Hanya, who was widely considered to be the Minutemen’s top player going into the season.

“We lost [Hanya] minutes into the preseason and we’ve made a point of not looking at injuries as an excuse,” O’Leary said. “Guys are just asked to come in and play and they’re happy to come in. In the midfield at different stages today, we had two central defenders up front. At one stage today, there was a freshman central defender – which Logan is – and a freshman midfielder – which Ryan Levay is. When you’ve got a central defender and he’s at the forward with both freshmen playing, that’s the place we’re in right now. All credit to the guys, I couldn’t be prouder.”

The Minutemen will look to rebound from the loss – their second straight – on the road Tuesday against Boston College. A big focus for UMass will be converting on scoring opportunities such as Wiemann’s crossbar hit, which the Minutemen have struggled with all season.

Given the success of the young players and the defense this season, the sky is the limit for the Minutemen if they can start converting scoring opportunities.