UMass’ defense comes through in win versus Akron 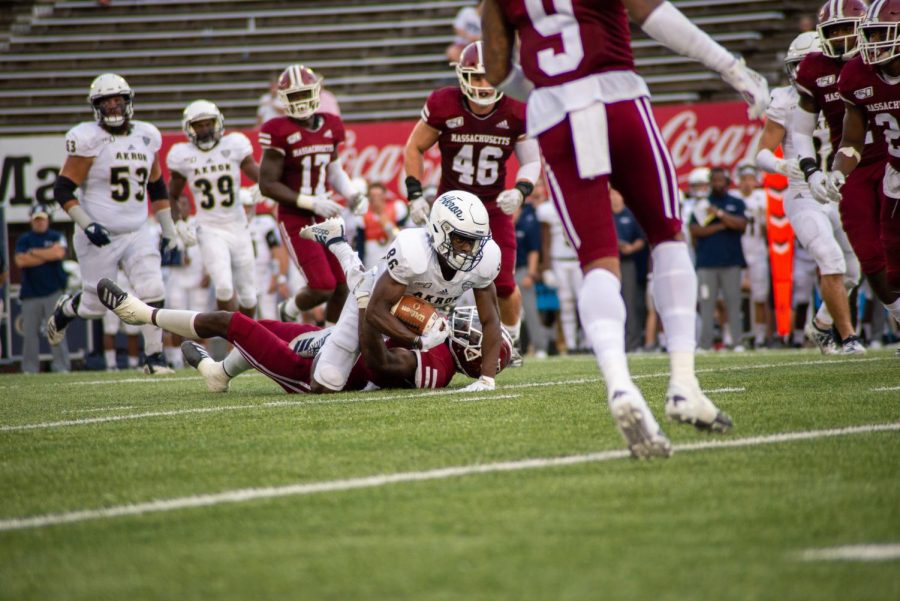 In Massachusetts’ 37-29 win over Akron, the Minuteman (1-4) defense had something of a coming out party after their less-than-stellar start to the year.

Saturday’s performance was far from perfect for UMass but allowing 29 points proved enough for the Minutemen to secure their first win of the 2019 campaign and the first career win as a head coach for Walt Bell.

“Yeah, we did ‘break the rock,’” defensive end Jake Byczko said of getting their first win, “but we do have to do a little more to keep improving each week.”

After giving up more than 45 points in each of their first four games, UMass held the Zips (0-5) to nearly half of their defense’s season average of 51. 8 points per game. While 29 points isn’t an elite performance by any means, for the Minuteman defense, it showed they could keep scores close for the offense.

More than anything else, Saturday’s game showed that UMass’ defense had taken a step forward. After struggling with big plays all year, the Minutemen didn’t allow a touchdown on a play longer than 17 yards.

“The exponential growth that our kids have had on this football team,” Bell said, “I’m just proud for those guys.”

Although UMass took a step forward in limiting opponent scoring, the area where the defense really made a difference was generating scores for themselves. The Minutemen forced three turnovers, two interceptions and one fumble, and the interceptions were vital in UMass coming out of the game with a victory.

“It’s great,” Byczko said. “Any time we can get the ball back to our offense is great. There’s nothing better than a turnover on defense.”

With 13:12 left in the second quarter, Isaiah Rodgers’ stepped in front of a Kato Nelson pass and was off to the races, going 58 yards, untouched for a touchdown. The score proved crucial in the end, with Akron closing the gap, and making it a one-score game.

“I knew they were going to get the ball out fast,” Rodgers said. “And Jake Byczko and the d-line, they’d been getting to the quarterback pretty much the whole game leading up to that moment. The game slowed down and there is it, touchdown.”

The second of UMass’ two interceptions came with 7:12 remaining in the third quarter. On the first play of an Akron drive, Zips quarterback Robbie Kelley threw right, getting picked off by Jordan Adams, who returned the ball inside the five-yard line, setting up a Minutemen touchdown.

While the performance was promising for UMass, it did come against the worst scoring offense in the country. Coming into Saturday, the Zips were averaging just 13.5 points per game.

Where the Minutemen can take the most pride in their performance is limiting the Akron running game. UMass had allowed 278.8 yards on the ground per game coming into Saturday and held the Zips to only 71 rushing yards on the day.

The Minutemen also found success rushing the passer against a young Akron offensive line. While UMass recorded just two sacks, they were consistently in the backfield, forcing Akron’s quarterbacks to make tough throws.

“The ability to create pressure,” Bell said, “knowing that we’re in a longer down and distance because we were able to stop the run a little bit was the biggest thing.”

The Minutemen found themselves in Akron’s backfield a lot Saturday. As a unit, UMass recorded seven tackles for loss on top of missing out on ball carriers on a few occasions that could have resulted in more.

“I think we executed better,” Bell said. “I thought [defensive coordinator] Rahim did a great job at creating some zone pressure, create some matchups that were favorable for us. And more than anything else, the kids are the ones who make all the plays.”

The Minutemen will face a tougher test defensively next week when they take on Florida International at 7 p.m.