Cooper and McTear score in loss to Crimson 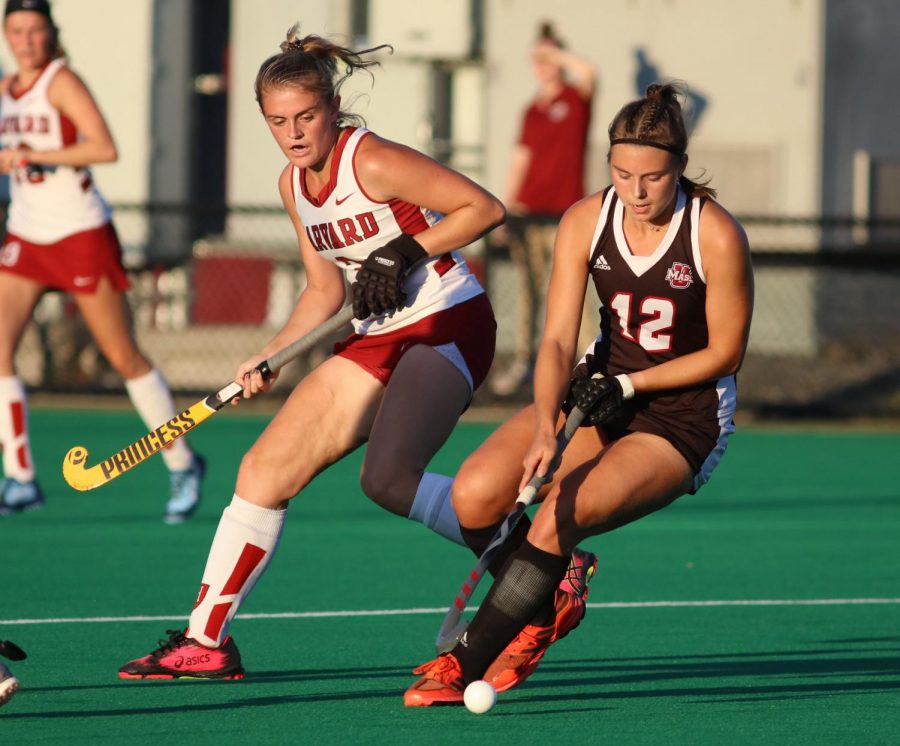 The Massachusetts field hockey team fought hard against 10th-ranked Harvard at the Gladchuk Field Hockey Complex on Monday, but in the end came up short, falling 3-2 to the Crimson (2-2) for their second loss in three days.

Harvard held a clear advantage in time of possession and shots on goal throughout, but the Minutewomen (2-4) refused to give in. Despite a first period which saw UMass fail to register a ball on net, the game went into halftime even at two. Monday marked the Minutewomen’s fourth consecutive loss to a ranked opponent and third straight decided by one goal.

Of those four ranked teams, the Crimson were the highest ranked opponent to start the season. It was also the best effort the Minutewomen have shown against that elite collection of competition.

“I thought our team played fantastic,” said UMass coach Barb Weinberg. “We have talked about the process and what it means to play top 15 opponents. Harvard is a very quality opponent. I think our possession and holding the ball was much better today. We had our opportunities to tie the game and win the game. But a few lapses on defense really hurt us tonight.”

The Minutewomen made the most of their opportunities in the second quarter. Halfway into the quarter trailing by two, they had their first real chance when Georgie McTear side stepped a defender to bring the ball into the Harvard defensive 25, resulting in UMass’ first corner of the afternoon.

After Katherine Furry shot the ball, Vera Herring took it from a Crimson defender and found the open Lucy Cooper who would not miss, cutting the deficit in half. It was the second goal of the season for the junior captain.

“I think just getting low and making sure I am in a goal scoring position,” Cooper said of the keys to her goal. “I scored the same goal against Yale, so it was pretty cool to get the first two in the bag.”

Less than five minutes later, nearly the exact same situation happened. This time, it was midfielder Mus Defauwes evading a defender to bring the ball into the attacking zone to set up a penalty corner and eventual  firecracker to even the game.

It was McTear’s third consecutive game with a goal after switching from defense to midfield in the offseason.

“From there Georgie really proved herself as a midfield, as an attacker,” Cooper said of McTear’s seamless transition. “And her goals this year are what’s proving that. I was so proud of her when she scored.”

At times during the game, however, the highly-ranked Crimson proved to be too much. They began the game in an offensive onslaught. Less than five minutes into the contest, senior Casey Allen brought the ball into the penalty circle, before making a beautiful cross-circle dish to Olivia Hoover who would make no mistake burying the ball behind UMass goalie, Marlise van Tonder.

Van Tonder came up large on a couple more occasions throughout the game, including immediately after the first goal. Harvard stole possession from the Minutewomen after the reset and came down hard on van Tonder, but she fought the ball off with her blocker in order to keep the deficit at one.

She also made a clutch save at the beginning of the third when the ball was loose inside the UMass defensive zone with Harvard players on the doorstep. Van Tonder stuck out her right pad and redirected the shot out of play.

“She has really settled into practice,” Weinberg said. “I think it takes a bit to get to know the defense you are playing with and to really get that communication going. She is fitting into that system really nicely. She has made a lot of key saves for us this weekend and will continue to do so along with the other goalies we have on the roster.”

UMass would, however, see their deficit grow to two early in the first after a brutal defensive turnover allowed Mimi Tarrant to walk in on breakaway against van Tonder who had no chance on Tarrant’s shot.

The Crimson would go up on the scoreboard one last time at end of the third after they converted their own penalty corner on a seeing eye shot to the far corner.

The Minutewomen, and particularly Cooper, had opportunities in the fourth but a few of their passes were unable to connect and Harvard goalie Ellie Shahbo made a couple saves to secure the win.

While losses always count the same, UMass knows it can take a lot away from games against stiff competition.

“We scheduled difficult this year out of conference right off the bat,” said Weinberg. “The goal of that was two things. One, to prepare us for conference play and two, if you can knock off one of those ranked opponents, you’re going to jump up in the RPI. The latter has not happened for us thus far, but we are definitely prepared for conference play.”

UMass returns to action for their Atlantic 10 opener this Saturday against St. Louis.