UMass football focusing on tackling ahead of matchup against Coastal Carolina 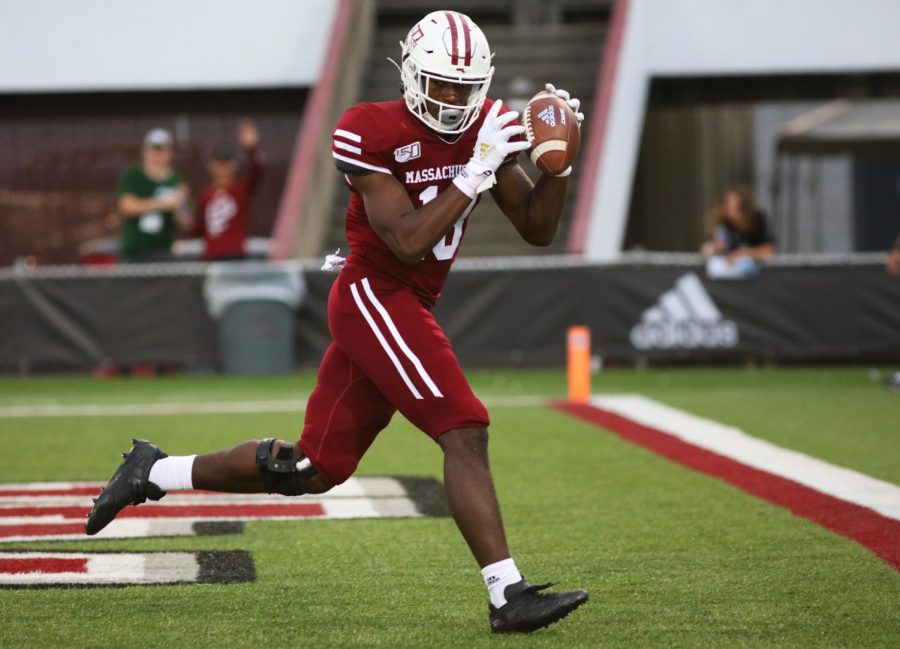 After losing their third consecutive game to open the season on Saturday, the Massachusetts football team is focusing on something simple in practice this week: tackling.

Having surrendered 338 yards to Charlotte last week and 267 yards per game this season, UMass (0-3) is looking to sure up their tackling mechanics and better their ability to stop the rushing attack prior to this week’s matchup with Coastal Carolina (2-1).

The focus on tackling is no surprise. After watching the game film, Bell claimed the Minutemen missed an egregious 29 tackles, allowing the 49ers (2-1) to bully their way to 8.5 yards per carry. Missed tackles also contributed to two of Charlotte’s longest plays of the game, a Cameron Dollar 46-yard touchdown reception and an Aaron McCallister 69-yard touchdown run late in the fourth quarter.

“Where we are as a roster right now, we’re really thin especially defensively,” Bell said. “But we’ve got to tackle. That’ll be a skill that will carry us through the rest of the program.”

Secure tackling will certainly be key to stopping the Chanticleers offensive attack on Saturday. Relying heavily on the run, Coastal running back CJ Marable leads the team in both rushing and receiving, averaging 99.3 rushing yards and 38.6 receiving yards per game.

Utilizing an option-heavy offensive, Coastal’s scheme presents a large challenge to a young defense such as the Minutemen. Giving their offense many choices in where to run the ball, the option offense will challenge UMass defenders all over the field to make the play.

“They’re going to make us play to our assignments,” said Bell. “Play with great assignment discipline, and more than anything else, put pressure on our perimeter players to tackle well in space.”

While tackling is a fundamental of football, the Minutemen coaching staff haven’t particularly been blessed with a roster full of skillful tacklers. UMass’ leading tackler, Cole McCubrey, mainly saw special teams coverage in past years. The junior linebacker’s 29 tackles this year are 11 more than any other player on the roster.

“Our efforts been getting better and better, it really just comes down to tackling,” McCubrey said. “We’re just missing a couple of tackles, and it’s been killing us. Tackling is a big thing for me, too. It’s something I struggled at previously during camp. It’s something I’ve worked at everyday to get better at, and it’s good to see it shaping over into the games.”

Though the sparsity of tacklers on defense puts the Minutemen at a personnel disadvantage, the coaching staff is not making excuses for the poor efforts so far. They believe it’s their job to get whatever players they have in the right spot to make the play.

“First and foremost, my job is to put the defensive players in the best position to be successful,” defensive coordinator Aazaar Abdul-Rahim said. “It takes a little bit of time to figure out where [each player] needs to be, what their skillset is. That’s still an adjustment … But at the end of the day these kids have been great, and I think we’re going to eventually turn the corner.”

UMass will attempt to turn the corner against Coastal Carolina on Saturday. Kickoff is set for 1 p.m.