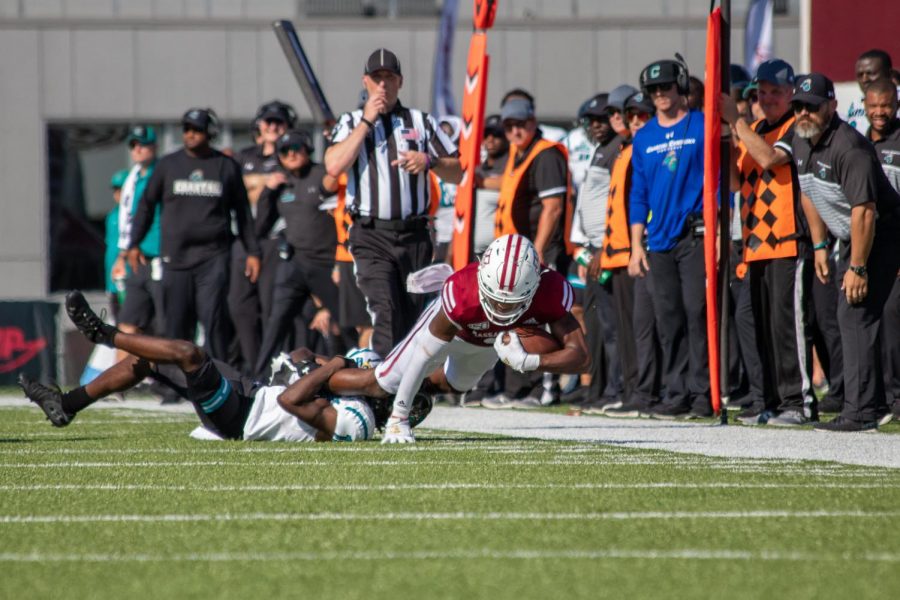 Despite trailing Coastal Carolina by seven halfway through the second quarter, the Massachusetts football team suffered a complete defensive breakdown en route to a 42-14 halftime deficit and a 62-28 loss.

UMass (0-4) gave up three touchdowns in the final five minutes of the second quarter, including one with 20 seconds left. After an early interception by Tyris Lebeau set up UMass’ first touchdown, the defense turned back into Swiss cheese, forcing just two punts all game and none at all until the second half.

“There’s a bunch of kids in those locker rooms, they’re trying to give us what we ask of them,” coach Walt Bell said. “The fact that we’re not able to put them in a position to give them a result is brutal. It’s a brutal deal and it’s hard, but there’s only one way out, and that’s to come back to work.”

For the second straight week, UMass surrendered over 300 rushing yards, as Coastal Carolina finished with 334 yards on the ground. C.J. Marable and Reese White left a slew of would-be tacklers behind them throughout the game, combining for 154 of those rushing yards, with Jacqez Hairston adding 50 more and a pair of touchdowns.

One of the worst runs came with the Minutemen trailing 42-14 midway through the third quarter, when backup quarterback Bryce Carpenter escaped a sack and scrambled 45 yards untouched up the middle to set up another Chanticleers touchdown.

“As long as football’s been around, the game’s been about blocking and tackling,” Bell said. “You can block and get off blocks, you can tackle or you can’t tackle. I thought they did a better job of those things, especially early in the game, than we did.”

The offense struggled early, mustering just 111 yards in the first half. Quarterback Andrew Brito finished with 100 yards on 25 attempts, including an interception on a tipped ball late in the second quarter. After Brito left with an injury, Randall West came in and led the Minutemen to two garbage-time touchdowns.

UMass intermittently ran a hurry-up offense, which was so successful in the first quarter of the season, but played much slower than previous games. Still, Coastal Carolina won the time-of-possession battle by 13 minutes.

“Knowing how thin we are up front [on defense], we’re purposeful trying to hold some calls and slow things down,” Bell said. “Only really using tempo when we thought it could benefit us, whether it was a formation in the boundary, whatever it may be. We’ve been trying to eat as much clock as we can. I think the third-down number — we were 4-of-13 at one point, I don’t know what we finished at — that’s the number, more than anything else, that’s keeping us off the field.”

If UMass was manhandled in two phases Saturday, the one bright spot came on special teams. Isaiah Rodgers racked up 240 kick return yards, setting up the Minutemen in CCU territory three times and breaking the UMass record for career kick return yards. In the kicking game, both George Georgopoulos and Cooper Garcia repeatedly pinned the Chanticleers deep, and Garcia delivered a big hit on a kick return that ignited the UMass sideline late in the game.

“We’ve played really good teams over the past four weeks,” Bell said. “Credit to our guys on special teams, they’re doing a really nice job. On the other side of that is, when you have drives that are starting minus-40 or better, they’ve got to turn into points. When you’re not finishing there, especially with how good they are on offense, you’ve got to finish with a kick or a score. For us to go backward a few times, disappointing.”

Still searching for its first win, UMass will be home again next Saturday to face Akron, another bottom-feeding team of the FBS.