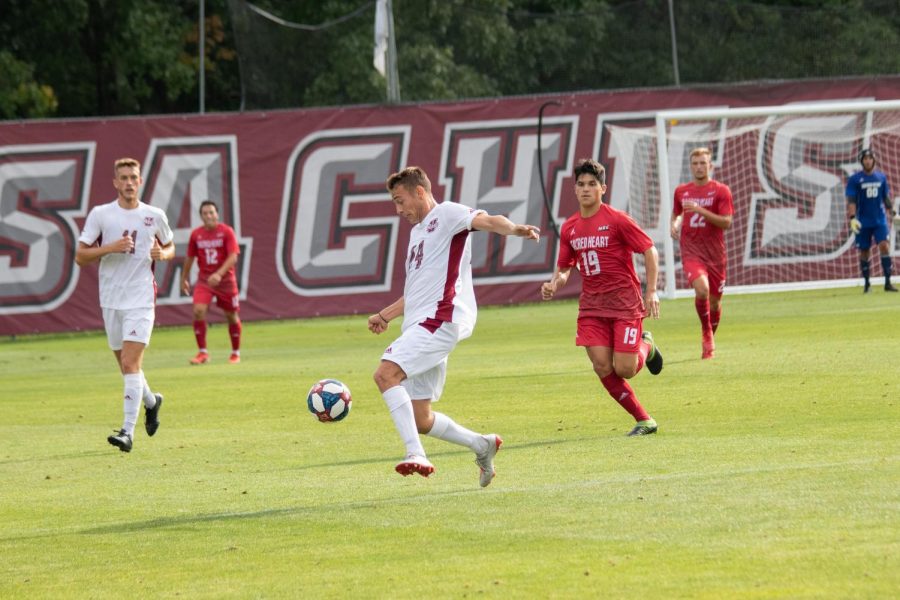 After 291 scoreless minutes to start the 2019 season, the stingy defense of the Massachusetts men’s soccer team allowed its first goal all year en route to a 1-0 defeat against Dartmouth.

The streak-breaking goal occurred in the game’s 21st minute when Dartmouth (1-1-0) midfielder Dawson McCartney put the ball in UMass’s (3-1-0) net off an assist from midfielder Zach Kalk. McCartney’s header flew by UMass goalkeeper Marvyn Dorchin for the only score of the day.

Despite several good looks in the second half for the Minutemen, including a crossbar hit by sophomore James McPherson, UMass proved unable to play catch-up as Dartmouth goalkeeper Alex Budnik recorded four saves.

“[I’m] a little disappointed not to get something out of the game,” coach Fran O’Leary said. “I thought Dartmouth dominated the first 20 minutes. In the second half, their keeper had a couple of really good saves and we hit the crossbar late on. All in all, I’m disappointed with the result but pleased with our performance.”

Dartmouth out-shot UMass 11 to eight, but the Minutemen still led in shots on goal with four to Dartmouth’s three. Budnik handled all those shots, with one save in the 33rd minute requiring Budnik to extend all the way to the top left corner of the net for the deflection.

“I thought our young guys did a superb job,” O’Leary said. “We had to pull Quinn out early in the first half for tactical reasons and he came back in the second half and he proved a handful for two very good central defenders. Ryan Levay, Logan; they all did a very good job.”

Although the UMass defense finally gave up a goal, the remainder of the game was characterized by the very same intensity that led the Minutemen to a clean sheet through the first three games. O’Leary was still very much satisfied with only allowing one goal to a very talented Dartmouth team, which stayed within a goal of No. 1 Wake Forest for 82 minutes last Friday.

“We’ve now given up one goal in four games, and that goal tonight was against a very, very good Dartmouth team,” O’Leary said. “They’ll be right in the hunt for the Ivy League this year. It’s a credit to us, and now we must start another little streak.

“If we can carry the intensity and the commitment from the last 70 minutes of the game for the remainder of the season, a bright season lies ahead for us.”

UMass will look to do just that starting Saturday on the road against Central Connecticut State. After a game against Bryant to conclude the road trip, the Minutemen will return home on Saturday, Sept. 21 to play UMass Lowell.