The Minutewomen are 3-2-2 this season 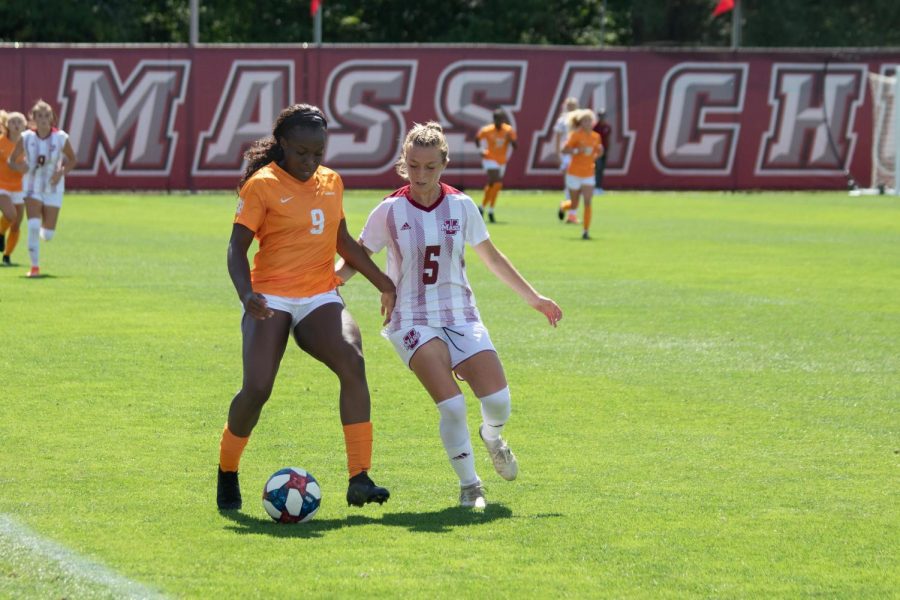 After a thrilling overtime match against No. 21 Tennessee where the Massachusetts soccer team left the field with a respectable 3-3 tie, the Minutewomen (3-2-2) have now shifted their focus to their first Atlantic 10 opponent of the year, Richmond.

UMass will look to establish the tone early as they face a Spiders (3-2-2) team that have been scorching hot as of late, scoring eleven goals in their last three games. The value of this game is elevated, considering it is a conference matchup.

“Our game plan is evolving still, but it is absolutely a game we feel like we need to get off on the right foot in conference and get a win under our belts to keep ourselves hopefully in the hunt to finish in the top four,” head coach Jason Dowiak said.

“I think we have our core values with how we want to play and I don’t think that when we have opponents coming it changes our game plan,” Frisk said. “If anything we heighten what we do and keep doing what we’re doing.”

To combat the prolific offensive attack of the Spiders, the Minutewomen are prepared to establish a stout defense led by goalie Peyton Ryan. Ryan has allowed 1.61 goals per game and posted a 70.7 save percentage through seven games this season.

“Peyton has been unbelievable,” said Dowiak. “There have been a few games that we feel like we’ve played pretty well, but there have been a few moments where she’s kept us in games where we’ve needed to start better but she’s always started very well. So, having that experience back there is a huge help. Two out of our three center backs are new as well so it’s still a group trying to figure themselves out and us organizing them and teach them how we want them to play, but having Peyton’s voice behind them and Dani Sclafani’s voice is very cool.”

UMass recognizes that in order to have the result they want, they must continue to put star freshman Melissa Kössler in situations where she can succeed. They have done this well recently as she has totaled nine points in her last three games, with two goals and an assist against Tennessee alone.

“She’s an under-nineteen German national team player so we had certainly high expectations of what she is capable of doing,” said Dowiak. “The only thing that really surprises me is how well she’s fit into the system and how well she plays with all of our returning players. We knew her and Jenny [Hipp] had a good relationship which is how we got connected with her in the first place. She links up so well with Beca [Frisk] already, when Kelly Marra goes in there and plays off her. Ansley Frazier one of our other freshmen, they see the game the same way.”

The Minutewomen will also look to lean on Frisk as she has fit in perfectly with a team that has managed a decent amount of personnel change from last year. Frisk played a very impressive 103 minutes against Tennessee and has started her last two games.

“Becca’s been getting better and better every game for us starting with the end of the game where she came in and scored two goals,” said Dowiak. “She had a point to prove with us and we know her well now and get her as motivated as we possibly can going into any training session or game. She’s certainly a very capable and threatening goal scorer but where she’s actually proven to be the most organized and responsible is when we don’t have possession. So teams are having a really hard time getting out of our pressure and she’s basically the voice that that group of three and everyone else is moving in unison.”

On a team continuing to find their best fit together, incoming freshmen have been asked to play a big role for a team they are not completely familiar with. So far this year, there have been nothing but compliments for their work ethic and contribution on the field.

“Yeah we’re really proud of the group,” Dowiak said. “It’s our first recruiting class so it’s exciting to see the players who we convinced to come and join us have the impact. We were talking about it after the game that at probably our best point in this recent game, we had five freshmen and two sophomores. Ava Jouvenel, who’s the transfer from Georgia State, has been starting pretty much every game as one of the three center backs. Obviously, Lauren Bonavita is only a sophomore but already producing on the level that we saw last year so we’ll hopefully get to see some goals from her in conference play.”

Frisk has also complemented some freshmen who have established themselves early in the season.

“Serena [Ahmed] has been a very consistent player out wide, and she’s come back from a torn ACL twice and she’s still in the recovery process but has proven that she can play at this level,” Frisk said. “Ansley Frazier is little, like I don’t think I’ve played with anyone that little, but she’s definitely proved herself in multiple ways. She can body a player three times her size and she’s so fast that the size doesn’t even matter in many ways on and off the field.”

The Minutewomen will face Richmond at Rudd Field on Sunday September 22 at 1 p.m.

Moiz Saqib can be reached at [email protected] and followed on Twitter @Moiz_Saqib.