Without a Dunkin’, UMass should be ashamed

What is this, University of Massachusetts at Seattle? I think not. 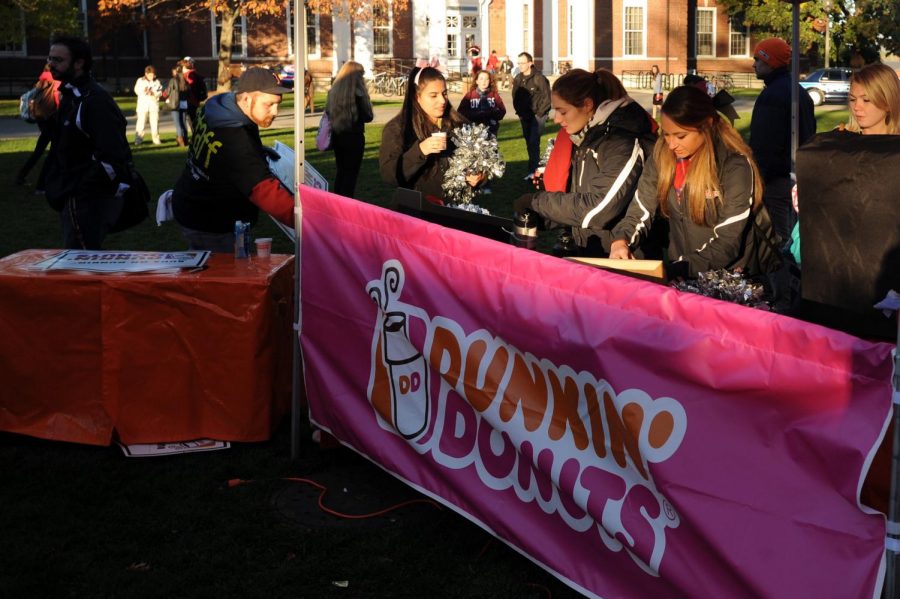 As Black Sheep UMass once said on Twitter, it “still baffles me that in Massachusetts, the Dunkin’ capital of the world, on the flagship campus, that we don’t have a Dunkin’ on campus.” I could not have said it better myself.

Massachusetts loves its caffeine as much as its sports teams. One would think that as the largest public school in Massachusetts, UMass would have a Dunkin’ around every corner. But no — New England’s signature coffee shop has no place on campus, forcing students to drive off campus just to get their fix. Many students would rather take time out of their day to spend money at their favorite chain than spend dining dollars at the inherently inferior Peet’s. Clearly, Dunkin’ pride is not limited to the confines of this campus.

Of all establishments, there is a Starbucks on a Massachusetts campus. Often overlooked, it is quite literally a small basement booth that slapped the Starbucks logo above it. If UMass is going to allow Dunkin’s competitor a place on campus, they might as well make the coffee decent. What is this, University of Massachusetts at Seattle? I think not.

Peet’s does not get off the hook either. What disturbs me most are the sandwich options. The pastries are acceptable because they can be left out on display without worry, unlike the sandwiches. Witnessing the Peet’s employees heat up a sandwich that has been sitting on display for an unknown number of hours, I realize that I am not hungry anymore.

What irks me the most about Peet’s is their blatant disregard for student’s wallets. This is proven by the tea that they offer. Peet’s supplies Mighty Leaf tea for their beverages and lattes, costing upwards of $6. This same brand of tea can be found for free in any dining hall on campus. For those with a meal plan, what’s stopping you from stealing some tea bags from the dining hall and saving yourself $6? Does Peet’s realize that students do not need to spend that extra hard-earned money when they can get it for free? Why not sell the students something unique, instead of ripping them off?

What people tend to purchase most at Dunkin’ and likely Peet’s and Starbucks, is coffee. The quality of coffee from both on-campus coffee shops is debatable. More power to the people that can tolerate Peet’s inferior blend — which is also offered at the dining halls — and Starbucks coffee, which has a taste comparable to tar. Having Dunkin’ on campus would allow students to start their mornings right with a familiar cup of coffee, a taste of home.

I get it, though. UMass has a contract with Peet’s and Starbucks that does not allow for a Dunkin’ to inhabit any corner of campus. Is this because these coffee shops are afraid that Dunkin’ would run them out of business? If I were them, I would be.

A fake Dunkin’ Twitter account that announced a grand opening in the Isenberg Hub caused so much excitement that UMass had to shut down the rumors. The announcement of a grand opening on the @UMassDunks account enjoyed 26 retweets and 107 favorites — a large amount for an account with absolutely no credibility whatsoever. Anyone could have made the account, and it is likely that whoever did was just an average student trying to see what would happen. Students wanted so badly to believe the announcement to be true that they would blindly believe it. To this day, the account still has 123 followers.

Although adding even one Dunkin’ location to the UMass campus is legally more complicated than it sounds, the University officials should consider it for the future. Everyone on campus could benefit from a little taste of home, and what is number one dining without the number one coffee shop in the country?