Two defensive lineman stepped away from team before week three 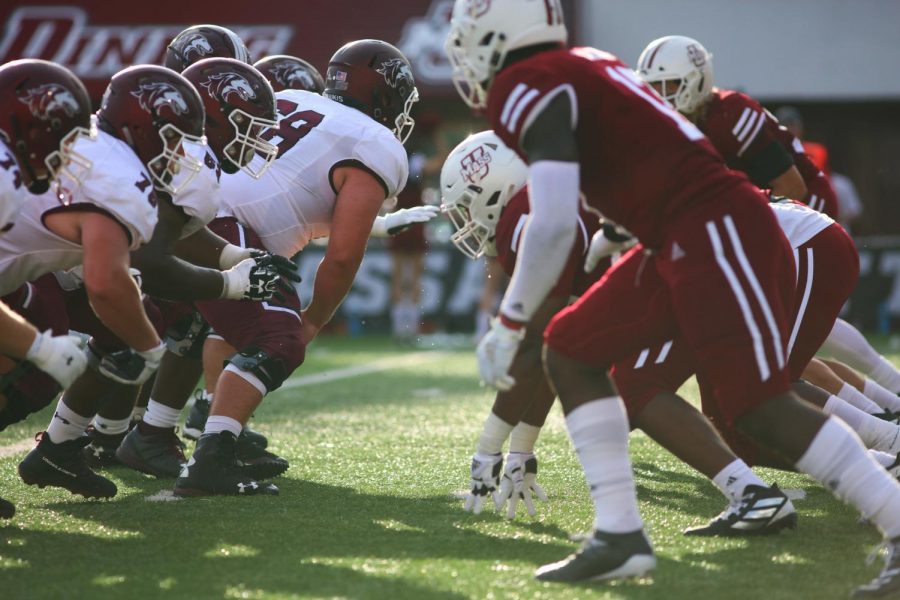 Defensive line is maybe the youngest and shallowest position group on an already young and shallow Massachusetts football team.

“The offensive and defensive lines in major college football,” head coach Walt Bell said, “those are junior and senior-led positions. When you have a group as young as we are, as inexperienced as we are, small victories are huge.”

With those challenges against them, the unit faces extra workload and expectations. This week, the Minutemen will go head-to-head with an offensive line from Coastal Carolina (2-1) that has paved the way for 647 rushing yards this year, good enough for 215.7 yards per game.

Stopping the run has been problematic in 2019 for the Minutemen. UMass has allowed 267 yards per game on the ground and 6.3 yards per carry. While those numbers are emblematic of a greater problem on the defensive side of the ball, the defensive line bears the brunt of the blame.

With Charly Timite and Shannon Junior II stepping away from the team, the line will be under even more pressure to perform. In the first three games, that duo was responsible for eight tackles and two sacks.

Pressuring the quarterback is an area where the Minutemen could miss Timite and Junior’s presence. In three games thus far, UMass has managed only four sacks, two coming from the departing defensive linemen.

While the Minutemen have struggled getting to the passer, Coastal Carolina doesn’t feature a prolific passing attack. The Chanticleers average just 181 yards passing per game and only 6.24 yards per attempt. A less-than-stellar passing attack may alleviate some pressure on the undermanned UMass defensive line.

With so few players already on the defensive line, however, losing two players puts the unit in a tight spot, considering it was already short on players heading into the season.

“If the process is the way it is supposed to be,” Bell said, “the results will handle themselves.”

One way in which UMass thinks they can counteract their lack of depth on the defensive line? Conditioning.

“When we play our opponents and it’s a long drive,” Osagiede said, “you can tell we’re more conditioned than they are. They’re usually huffing and puffing but we keep our wind.”

Though the defensive line hasn’t been a strength so far, there is room for growth, a point that will prove invaluable to the strength of the defense.

“[Growth so far], its been small, very incremental,” Bell said. “But, a guy like Wilson Frederick, he had his best practice as a Minuteman yesterday. Is he gonna look like Aaron Donald tomorrow? Probably not. But for him that was a win.”

Between growth by underclassmen on the defensive line and a complete recruiting cycle by Bell, the Minutemen have hope that the position group can improve going forward.

“We’re trying to make a foundation and make good habits,” Osagiede said. “So later down the road, the next three, four, or five years we’ll be here, we can build on that.”

The Minutemen kick off against Coastal Carolina at 1 p.m. on Saturday. The game will be played at McGuirk Alumni Stadium.