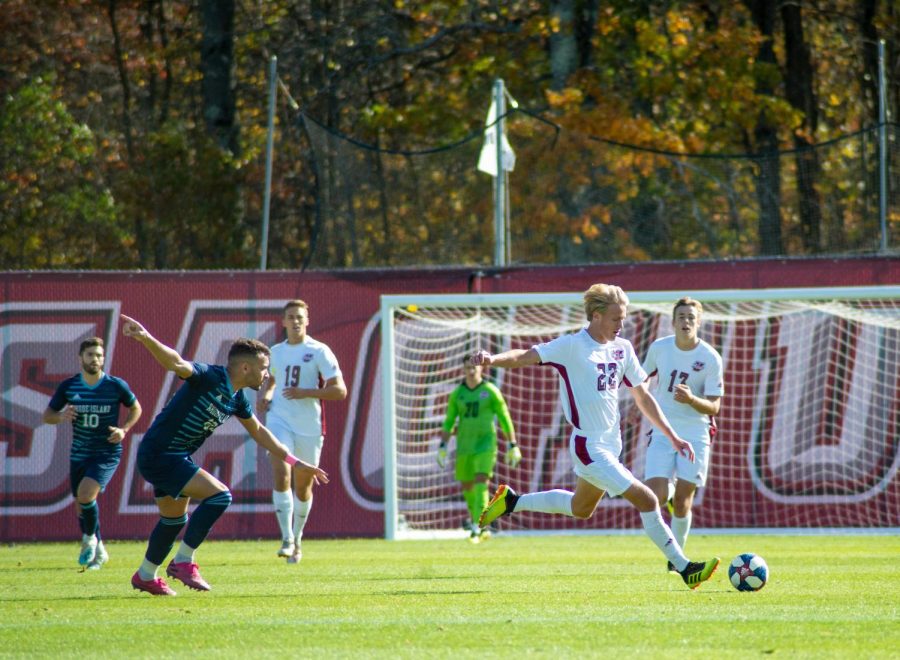 A solid offensive appearance and dominant possession in the second period by the Rhode Island men’s soccer team resulted in a seventh conference win for the program in its 2-0 win over Davidson.

In the waning moments of the game, senior Simon Trcka chipped a second goal over goalkeeper Sawyer Gaffney with just 16 seconds left in the game. Gaffney made eight saves over the course of the game compared to Rams keeper Stefan Schmidt’s three saves.

The first goal came just nine minutes after a red card to Wildcats midfielder Mateo Alzate, an ejection that left Davidson shorthanded in the midfield and opened up space for URI.

With the loss, Davidson has been knocked out of conference tournament contention.

The Rams currently hold first place in the A-10 conference and will be going against Denver on November 2 before heading to the Bronx for the championship tournament.

Goals scored early in both periods pulled the Virginia Commonwealth men’s soccer team ahead of George Washington 2-0. The loss placed GW (5-10-1, 3-4 Atlantic 10) in a dangerous position as the eighth-seed in the conference.

Both the Colonials and VCU (6-6-2, 5-1-1 Atlantic 10) took seven shots on goal over the course of the game. GW went on the board first as Barcelona native Fortia Munts scored three and a half minutes into the game.

Following a yellow card to GW freshman Tom Cooklin, the Rams managed to find the back of the net on the set piece when midfielder Fiorre Mane scored just over 15 seconds into the second half.

Both teams will go on the road this week, with VCU going to state rival George Mason University. The Colonials will have a final chance to secure their spot in the championship at Dayton on November 2.

Two unanswered goals in the first period gave the Fordham men’s soccer team the edge they needed to win their final home game of the season against George Mason on Saturday.

A comeback was attempted with 12 minutes left in regulation by the Patriots as defender Mads Tranberg scored his first goal of the season with a header off a free kick. Less than four minutes later, however, the Rams retaliated as graduate student Filippo Ricupati scored. Ricupati was responsible for four of Fordham’s 10 shots on goal.

The next week Fordham will go on the road against Columbia University before playing their last regular season game at Saint Louis.