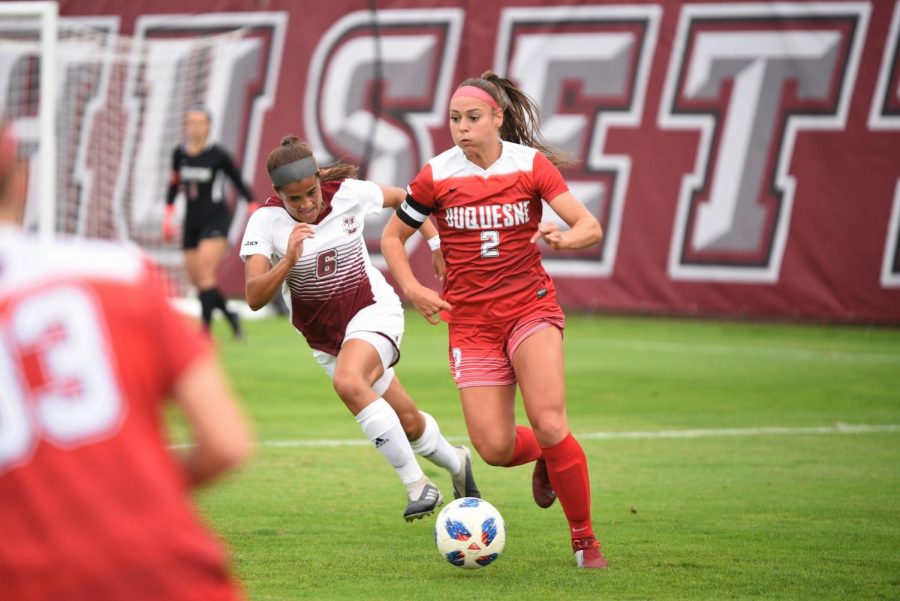 The Virginia Commonwealth women’s soccer team lost less than two minutes into overtime against Fordham last Sunday after a resilient second half effort, falling by a final score of 3-2.

The game-winning-goal was scored by Fordham freshman Kristen Cocozza 1:43 seconds into the extra period. The win marked the Rams’ first road victory in A-10 play.

Fordham midfielder Hope Baisley got a yellow card just over four minutes into the first half. The ensuing corner kick led to a shot on goal by VCU’s Lyndsey Gutzmer, which was blocked by goaltender Kelly LaMorte. LaMorte owns the eighth highest save percentage in the A-10 at .752.

Each half was dominated by one side, with both teams scoring two goals and outshooting their opponent by a substantial margin. Fordham led 8-4 in shots in the first, while VCU choked out all shots on goal in the second and took 13 shots themselves.

Fordham’s next road game is on Oct. 20 against St. Joseph’s University.

All three of SLU’s goals were scored in the first 30 minutes, and the rest of the game was mainly a series penalties. There were four corner kicks in the final 10 minutes, all carried out by Jaime DeBerardinis.

The second goal of the game came from defender Isabel Burke, her first of the season.

The St. Joseph’s women’s soccer team beat Duquesne 1-0 in double overtime on Sunday, as defender Erica Behr scored the game-winner to end the match on her first goal of the season.

By the end of regulation, the Hawks (6-7-1, 3-3-0 Atlantic 10) and Dukes (5-5-2, 3-3-0 A-10) both had multiple shots on goal, but the goalies kept it tied. Dequesne goalkeeper Cameron Perrot currently has the second highest save percentage in the conference at 0.841. The goal she allowed in overtime was only the seventh goal she has allowed all season.

There was a yellow card called on Duquesne junior Deena DeBaldo near the end of the first half, less than 10 minutes after Debaldo attempted a shot that went wide.

St. Joseph’s is back in action on Thursday at George Washington.