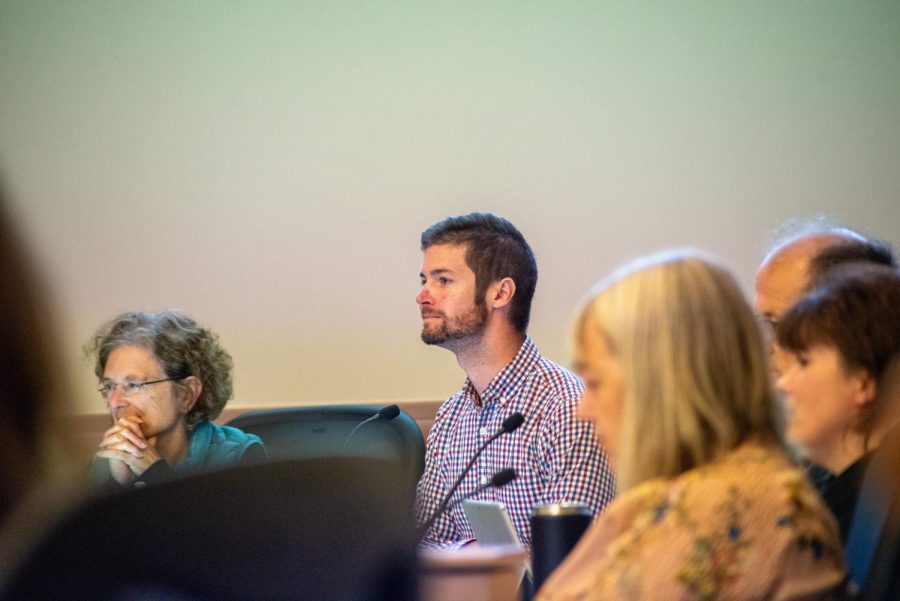 The Amherst Town Council held a meeting on Monday evening where University of Massachusetts administrators address the plans for North Village.

On Sept. 27, the University released a statement announcing that the North Village complex, which is family housing for graduate students, will be replaced with new graduate housing.

The complex was built in 1971 and in an email sent out to residents, the University said “the North Village units have far out-lived their projected 20 to 25-year life expectancy and have deteriorated to the point where demolition and replacement is the only viable option if we are to provide you with the quality housing you deserve.”

The statement announced that the construction would be finished in 2022 and priority would be given to current residents of North Village. “We are mindful of the inconvenience and disruption that this project will cause for you and your families and we are committed to doing everything in our power to support you through these transitions. Our residence life staff will continue to work with each of you and your families to help manage the transition.”

In response to this announcement, members of the North Village community broke out into discussion about the construction, including a letter to the editor published in the Massachusetts Daily Collegian.

In addition, the residents of North Village have released a statement with their demands of UMass which includes not discriminating when relocating residents, conducting a forum and being more transparent with residents, return to the form of a yearly lease, signing a contract with GSS/GEO that the construction will be complete by 2022, building an equal amount of housing units for family students and increase funding for the Dean of Students Office so that current and incoming graduate students may use to pay rent, support their families and revoke the closing of the family center.

“So, we recognize that especially for our students who live in North Village this is a big change for them and we’ve been working to do what we can to mitigate the impact. Immediately following the trustee vote on Sept. 6, the residents there were all notified that this project would be taking place and that there would need to be a relocation which we wanted to get the word out,” Buffone said. She went on to explain how staff members will be meeting individually with each resident to figure out their needs.

The administrators also held a meeting with residents of North Village where they answered questions for two hours.

Administrators also sent out archives to property managers in North Amherst to find relocation sites which is close to their current community, specifically Brandywine and Presidential Apartments.

Students who are relocated will continue to pay the same costs that they were paying in the North Village complex.

After, questions opened up to the Town Council, who addressed issues such as play areas for children, number of beds, sustainability standards and breaking up the strong community which defines North Village.

One main point of discussion came from a question from Cathy Schoen, a counselor from District 1, who asked, “Will you be admitting other families with children and where are you going to put them? And then is there a plan on reevaluating here? You had a community of graduate students and kids who were together so will you maybe not admit one group? So what happens in the interim period as you’re building?”

In response, Maroulis said, “With regard to the students that will be relocated to temporary housing in Brandywine and Presidential, they will have the right to come back to the village complex and pay the same rent that they are paying, plus the customary increases that we mentioned before. So, we intend to bring the community back together.”

After the Counselors finished with their questions, the discussion opened up to the community.

John Hornik spoke on behalf of the Amherst Municipal Affordable Housing Trust. “In the short term, members were very concerned about displacement of families in North Village and graduate families in Lincoln Apartments,” Hornik said. “Looking at the long term, we are concerned about whether the problem of housing affordability has been adequately addressed. Costs of both home ownerships and apartment rentals have been rising quickly in Amherst.”

“It does not help that the University has just enrolled about 800 new students beyond their expectations this fall,” Hornik said, finishing with his opinions on the necessity of meetings about plans to accommodate housing and holding new enrollments at UMass until housing supply is increased.

Meg Gage, a representative from the District 1 Neighborhood Association, was in support of her neighbors in North Village. “I want to give my personal experience of what an extremely special neighborhood and community North Village is. I first became involved with North Village over 30 years ago when my kids were involved at Marks Meadow [Elementary School]. The first year they were there, there were 22 native languages spoken by those children,” said Gage. “North Village is diverse in really diverse ways. It is an international community of highly educated people from literally every continent.”

More comments were made about how the Town Council can make residents of North Village feel secure, housing affordability issues and how graduate students and their families who stay throughout the year support the town economy and programs.

Councilwoman Sarah Swartz called on the University to continue making housing affordable in the future.

In a closing statement, Buffone said “Thank you to the Town Council and to our graduate students and others who have come out tonight and this afternoon. We really do see this as a continuation to the conversation we had and we look forward to many more conversations with all of you.”

Jonas Schmidt, previously an undergraduate student at UMass and currently enrolled as a graduate student, is a resident of North Village. “I think progress has been made insofar as the administration’s representatives have disclosed a lot of information, whereas previously, we had very little information. So that’s progress in a sense,” said Schmidt.

He continued, “There was a meeting earlier today in which they addressed more of the current residents’ concerns about the interim period. I would say for the most part, they are trying to attend to people’s needs and accommodate people which is encouraging. But they also sort of refuse to address longer term what the future housing will be which is a matter of concern for us. Not simply because some of us will be residents in two years, but just for future students and students invested in the community.”

Cassie McGrath can be reached at [email protected] and followed on Twitter at @cassiemcgrath_.