At student-led protests, non-students should stay on the sidelines 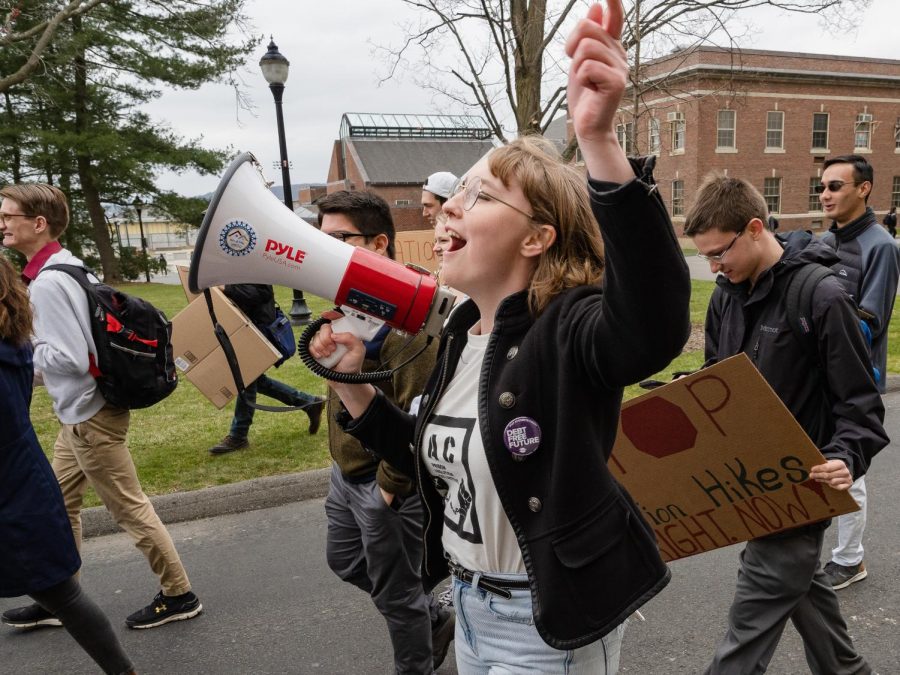 On Sept. 27, 2019, the UMass Extinction Rebellion joined with members of a group called the Red Brigade for a somber “die-in” demonstration outside the Fine Arts Center. Together with a modest posse, they collapsed to the floor, a heart-wrenching display of existentialism as they warn the public of potential extinction from climate change.

This event came at the toes of another demonstration that took place a week before, where hundreds of students walked out of class to propose systemic changes to our economy and society. Students of all Five Colleges and countless RSOs promoting sustainability and working to elect candidates gathered to confront climate change. It was a display of strength in the face of governmental apathy.

While there’s a valid debate about which event was more persuasive or effective, both demonstrations were laudable for anyone interested in trying anything to promote climate change action. But one distinction was hard to miss. While it is not in doubt that the Climate Strike was a student-led collaboration between RSOs, faculty, the community and indirectly the student media, I’m not so sure that the “die-in” was. Despite widespread reporting by regional media platforms like MassLive and the Daily Hampshire Gazette, the ratio of students was visibly lower.

One could argue that a smaller ratio of students in attendance shows a lack of conscientiousness by the student body, but I disagree. In fact, the opposite is true: to me, the whole point of the Climate Strike is to connect with passionate students and give the resources and connections they need to make real change. That may entail joining a group, volunteering, donating to a cause or performing any type of service. To reckon that lower turnout is a sign of apathy is founded on the naive assumption that protests are only for virtue signaling.

With that in mind, the nature of this “die-in” left a sour taste in my mouth. Something felt wrong about outside parties marching to our campus and demonstrating in front of our building. Not that they don’t have the right — of course they do, and I respect their methods — but the lack of student turnout suggests a lack of connection with the student body.

Sharing space is not my problem. So long as guests are not threatening my neighbors, I welcome international or regional groups to engage with my community. My problem is whether awkward situations like these are in line with the premise that climate change action is of, for and by students. If it isn’t, why did it happen here?

I suspect it has to do with the greatest of intentions — empathy. People who care about my generation’s future want to support us. Demonstrating here, the largest college campus in the area, is one way of showing that. Given they have the ability to demonstrate Friday afternoon, they have some level of time, effort and privilege that they are willing to give up for the cause of climate change action. This is good. We need these people to build a more sustainable future.

But there’s a difference between being supportive and co-opting a movement, and the demonstration Friday straddles that line. If “Fridays for Future” is student-led, that means that students should generally dictate where, when and how the protest unfolds. Allies and supporters are welcome to join them at the sidelines, but doing it on their behalf takes away from its original intention.

Imagine if University of Massachusetts students came to Amherst-Pelham Regional High School and organized a rally. It would be a strange move, especially since it is known that students there have already been on strike. Why target them when we have access to our campus and Amherst center, where publicity is more accessible and more people can be reached?

There is a more dire consequence of co-opted events: it damages the perception that student-led movements are truly student-led. Movements are constantly attacked, one argument being that adults are using young people as “human shields” and putting them on a pedestal. These distractions mistake the incredible rise of youth-led movements for a surge in compliment-seeking people — in other words, missing the forest for the trees.

I admit there are shades of gray. The “die-in” featured a speech by a 12-year old student, for example. I may be underestimating, too, the number of UMass students responsible for this event. My goal is not for anyone who participated in the event to feel discouraged by my warning; rather, I want to bring attention to the need for student autonomy.

A good rule of thumb: if you’re not the main subject of a protest, thanks for your support. But let the people leading the charge decide where, when and how the protest unfolds — or when to hold out. Ask before you give. That way, all parties walk away better off and progress continues.