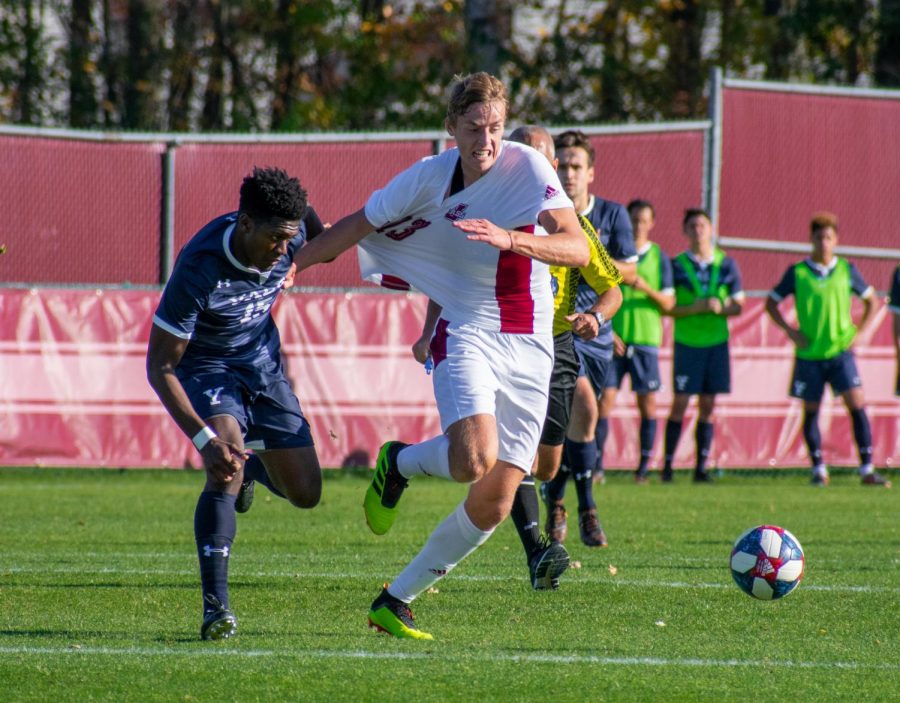 Offense may be a point of concern for the Massachusetts men’s soccer team in 2019, but one former local hero just might be able to turn that around: freshman Evan Fournier.

In high school, Fournier starred just down the street from UMass for the Belchertown Orioles, leading them to the Western Massachusetts Division III crown in his senior season. In the Western Mass final, Fournier assisted on both goals, including the overtime game winner, to push Belchertown over Frontier Regional High School.

Although the Orioles didn’t make it to the state championship game, Fournier’s heroics were enough to attract the attention of UMass coach Fran O’Leary and his staff. After attending O’Leary’s camp and talking with fellow Belchertown and UMass soccer alum Alex DeSantis, Fournier opted to join forces with O’Leary.

“I really like the coaching staff as well as the team,” Fournier said. “Alex DeSantis, who is also from Belchertown, graduated here a couple of years ago and he was on the soccer team and they ended up winning the 2017 A-10. So I talked to him, and he was a big part of my decision in coming here. He talked very highly about the coaches, about the team and the program in general. Obviously, it’s really close to me, so it feels nice to be representing my hometown.”

At UMass, Fournier played sparingly for the first part of the season before cracking the starting lineup in the Minutemen’s Oct. 9 game against Davidson. Fournier has been secure in the starting lineup since then, logging 94 minutes last Saturday against Duquesne and a full 90 in Wednesday’s matchup with URI. With Fournier’s contributions, the Minutemen have looked like a different team. Before Duquesne, UMass had gone a full month without scoring a goal. In the Duquesne game, UMass scored twice, with Fournier assisting on one of them and nearly scoring his own.

The Minutemen, who have struggled through a transition season after graduating several key players, have relied on a lot of young players, particularly freshmen such as Quinn Serafino, Ryan Levay, and Logan Brown. Fournier’s natural passing ability provides some of the few offensive highlights of the Minutemen’s largely stagnant offense this year. In addition to his passing, Fournier has shown advanced composure, an unusual trait for a freshman with such limited collegiate level soccer experience.

“It feels great that I’ve gotten an opportunity to play,” Fournier said. “I’ve started the last few games. I get more and more minutes, I feel more comfortable on the field, I feel like I’m becoming more of a leader on the field. It’s going to be a good experience if we are able to make the playoffs or going into next year and being a little more experienced.”

With UMass needing to win out over the final two games to have a shot at the A-10 playoffs, Fournier’s increased role means that there is pressure on him to perform. Fournier, however, is unfazed by the challenge.

“I just want to help my team get the win in whatever way possible, whether that means that I get a goal, that I get an assist or just making tackles,” he said. “Whatever’s necessary.”

If Fournier can use his offensive talents to help UMass win Saturday’s game with La Salle and the following Saturday’s game with Saint Joseph’s, the Minutemen can still qualify for the A-10 playoffs if George Washington and La Salle both lose the rest of their games. With its season in trouble, UMass needs a weapon, and against Duquesne, Fournier looked as close to a weapon as any Minuteman has since September.