Trivigno and Leonard threw the monkeys off their backs 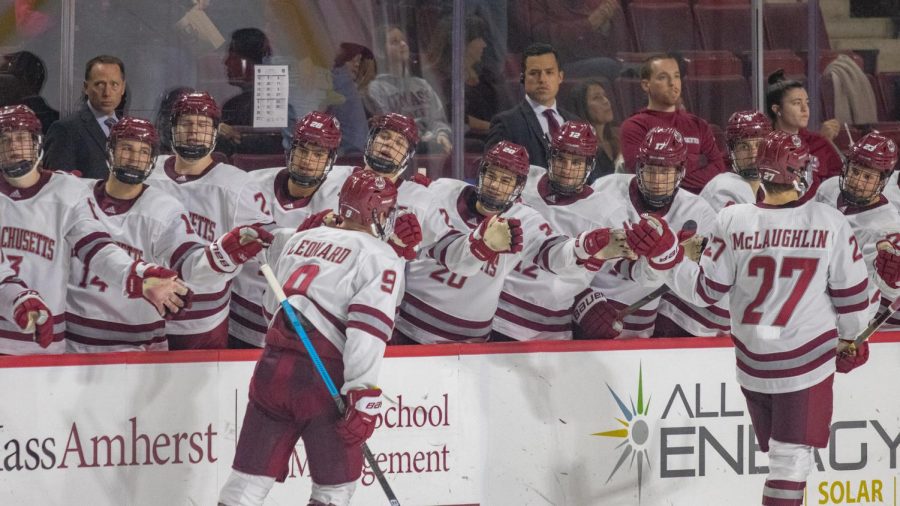 No one looked better through the first two games for the Massachusetts hockey team than Bobby Trivigno and John Leonard. Yet through those first couple of tilts, neither even had a point.

That all changed in the Minutemen’s 6-1 drubbing of the Union hockey team on Friday night, as the duo had a combined three goals and their effort finally showed on the scoresheet.

“[Leonard] could’ve had five or six goals and good to see [Trivigno],” said Carvel of the efforts laid out by the two speedy wingers. “[Trivigno] got a little lucky on the first one and I thought an unselfish play by him on the entry to the power play, allowed him to score the [second] goal. When you’re unselfish good things happen for everybody. It was good. We got scoring throughout the lineup.”

It all started with Trivigno and Jack Suter — the new guy in charge of centering Trivigno and Leonard. Just 37 seconds into the second period the two came into the offensive zone on a 2-on-1 after a Union (0-5-0) turnover at center ice, and Suter slid a pass across to Trivigno who poked it past outstretched Dutchmen goalie Darion Hanson for UMass’ (2-1, 0-1 Hockey East) opening goal.

Midway through the second period, the Minutemen found themselves on the power play. Ty Farmer passed the puck off to Zac Jones at the point. Jones corralled the pass and found a wide-open Trivigno to his right who blasted a one-timer right through Hanson’s legs to make it 2-0 UMass.

“Yeah, it’s always nice to score, but happy with the win,” said Trivigno. “All the boys played really good.”

Then it was Leonard’s turn.

Similar to the second period, the Minutemen came out firing on all cylinders to begin the third. The only difference was it wasn’t Trivigno – it was Leonard.

Leonard actually began the period with a breakaway and it ended like all of his other previous scoring chances had – he was robbed. But seconds later, Leonard drove the puck to the net, put it through the legs of Hanson and threw the monkey off his back, a very well-earned first goal of the season for the Amherst.

“Yeah, it was a good feeling,” said Leonard. “I’ve had a lot of chances these first couple games. If you keep shooting the puck, hopefully eventually it’ll go in. Lucky enough I got a break today.”

Prior to the game, it came as a surprise to many when the starting lineups were posted, and Suter was between Leonard and Trivigno instead of Philip Lagunov, who was the extra skater on Friday night and didn’t see any action. On the first line, Anthony Del Gaizo replaced Jake Gaudet.

Carvel claimed that the reason for his top two centers being out of Friday night’s tilt was “message-sending”.

The shakeup worked, as the chemistry among the newly put together trio was evident. They maneuvered well through the neutral zone, entered the offensive zone with ease and cycled in Union’s end in a way that was seemingly effortless.

With Leonard and Trivigno’s speed, entering the zone has never been an issue. But on Friday night, everything just seemed to be going right for them with their new middle man.

“I thought they did good,” said Carvel of the new Trivigno-Suter-Leonard line. “[Suter] brings some speed. He’s got some good sense. We use him a lot on the penalty kill, good faceoff guy. I thought he did well. I thought that line had some good energy, some good speed. So we did a good job.”

Trivigno and Leonard were both driving forces of the Minutemen’s offense last season – the former’s 28 points ranked sixth on the team, while Leonard’s 40 points was fifth in all of Hockey East.

That made it all the more puzzling when their scoring chances weren’t going in the back of the net through the first two games.

But all that ended Friday night when their hard work was finally rewarded.