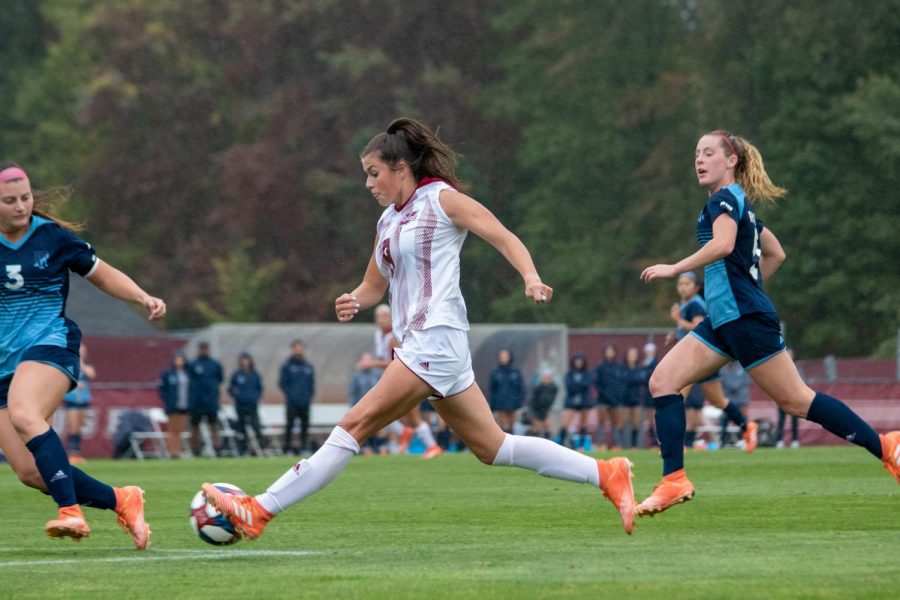 The Massachusetts women’s soccer team disproved any doubters once again with yet another come-from-behind victory Thursday against La Salle. The Minutewomen captured their ninth win of the season in a 4-2 victory against the Explorers, rallying themselves back into the game on multiple occasions.

It was Lauren Bonavita, UMass’ (9-4-3, 6-2-1 Atlantic 10) second-leading point scorer, to open the floodgates in the second half, scoring UMass’ first goal of the game in the 56th minute. Bonavita sparked the rest of her fellow Minutewomen to join her in a goal-scoring barrage that elevated them over La Salle (9-7-1, 5-4-0 A-10).

“Lauren is a natural goal-scorer,” coach Jason Dowiak said. “She’s up to nine goals now and she’s scoring goals when it matters the most, which is nice to see at the end of the season.”

The sophomore out of Hanson, Mass. has been the second-most productive offensive player for the Minutewomen, behind only Melissa Kössler. After starting the month of October off with a three-game scoring drought, Bonavita has bounced back, scoring one each in the last three contests.

“[La Salle’s] a very tough team,” Bonavita said. “We knew, coming in, they were physical and very direct. We were able to get around them by possessing. We went down in the first half, but we’re used to that—we didn’t really let it affect us.”

Going into Thursday’s matchup, both teams were on hot streaks, with the Minutewomen unbeaten in their last four and the Explorers winning their last two. La Salle registered shutouts in the two games prior to playing UMass, earning a three-player sweep in the A-10 Weekly Awards. Explorers Maci Bower, Claudia Jenkins and Naya Vialva all received conference accolades for their efforts in the two clean-sheeted contests.

Bonavita’s goal on Thursday was a marvelous one, settling a feed from Serena Ahmed and rifling the ball past La Salle keeper Jenkins from 20 yards out.

“I definitely look for the ball and I know I like to shoot from a lot of different areas,” Bonavita said. “Once I get the ball, my first thought is ‘Can I shoot?’”

Bonavita has undertaken somewhat of a new role by becoming, essentially, the first offensive player off the bench for the Minutewomen. Playing in 54 minutes on Thursday, she also registered two shots on goal in eight total shots, the most she’s taken in a contest so far this year.

Before UMass can set its sights on a postseason run it’ll have to compete in one last regular-season match.

“Whatever I can do to help my team in the tournament [would be] everything,” Bonavita said.

Bonavita and the Minutewomen will look to close out the regular season on a positive note when they travel down to Richmond, VA on Sunday to square off against Virginia Commonwealth. Game is set to start at 1 p.m.