Bortle: UMass’ wake-up call against AIC will benefit them in the coming month 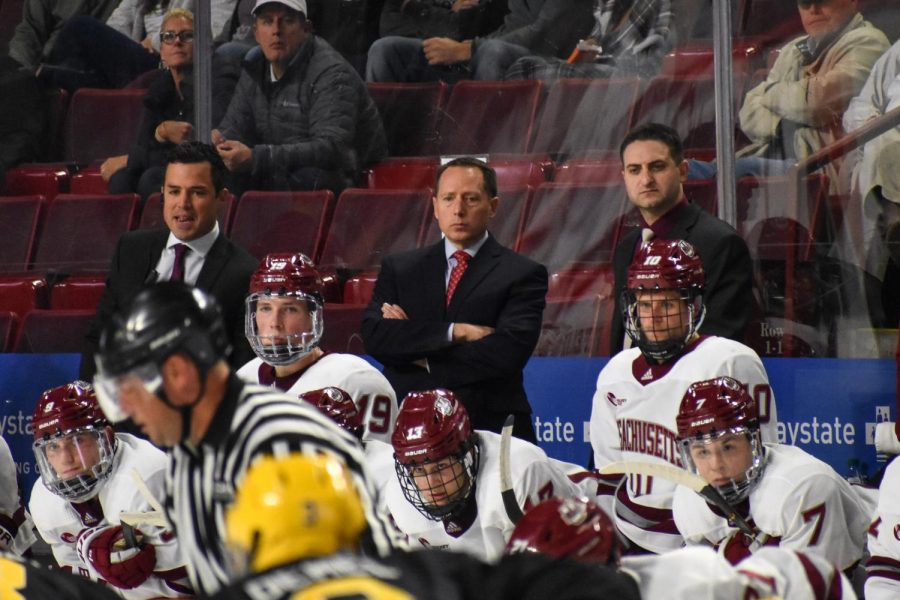 It’s not often that a 4-1 victory can serve as a wake-up call, but that’s exactly what Massachusetts’ win over American International was Friday night.

UMass (4-1, 0-1 Hockey East) came into the contest fresh off back-to-back wins by five-goal margins. A slow start nearly cost the Minutemen as AIC (1-3, 1-0 Atlantic Hockey) hung around late into the third period.

“I didn’t think we were ready to start the game tonight,” coach Greg Carvel said. “Our battle level was poor and our discipline was worse.”

The poor discipline Carvel spoke of manifested itself in seven power plays for AIC. Although the Minutemen remained perfect on their penalty kill, they can’t afford to get used to playing a man down. Of the four teams yet to concede a power-play goal, UMass sits atop the list with 26 successful penalty kills.

While the special teams proved to be a strength yet again for the Minutemen, it also drastically limited their ability to find any sort of rhythm on the attack. The second period especially featured four UMass penalties, including a five-minute major in conjunction with a minor penalty that gave the Yellow Jackets two full minutes with a 5-on-3 advantage.

“When we weren’t in the box in the last two periods, I thought we were playing well,” Carvel said, “but we couldn’t stay out of the box. And that’s about as undisciplined — or lopsided penalty minutes we’ve been involved with in a long time.

“The fact that we were able to shut their power play down tonight in the situations that they had was a sign of the character of our guys.”

The Minutemen got away with these mistakes against AIC. They won’t be so lucky if they continue playing like they did in the first two periods. With potentially their toughest stretch of the season coming up, UMass needs to match the intensity they played with in the third period for 60 full minutes.

“I give my guys credit,” Carvel said. “When their feet were really up against the fire, they dug down. I’m not happy with the poor start of the game, but I am happy with the strong finish.”

Next weekend’s series against Northeastern serves as the perfect measuring stick to see how UMass responds.

After dropping a game 3-1 to Northeastern on the road on Oct. 15, the Minutemen head back to Boston this coming Friday with a chance to show that the last three minutes of the third period of this weekend’s game wasn’t a fluke.

Having to grind out a win with less than three minutes left in the third opened UMass’ eyes to the kind of toughness it’ll need to play with during the upcoming stretch.

“When we had a flat start, they took momentum to start the game,” freshman winger Cal Kiefiuk said. “I think the biggest thing for us coming in between periods was to reset, and we did. We took over the second and third — and third periods have been our best all year, so we just got to have a better start.”

Had the Minutemen instead faced their November schedule coming off the breeze that was the Union series, UMass might’ve found themselves in for a rude awakening. Alternatively, the Minutemen now know they need to come out ready to play.