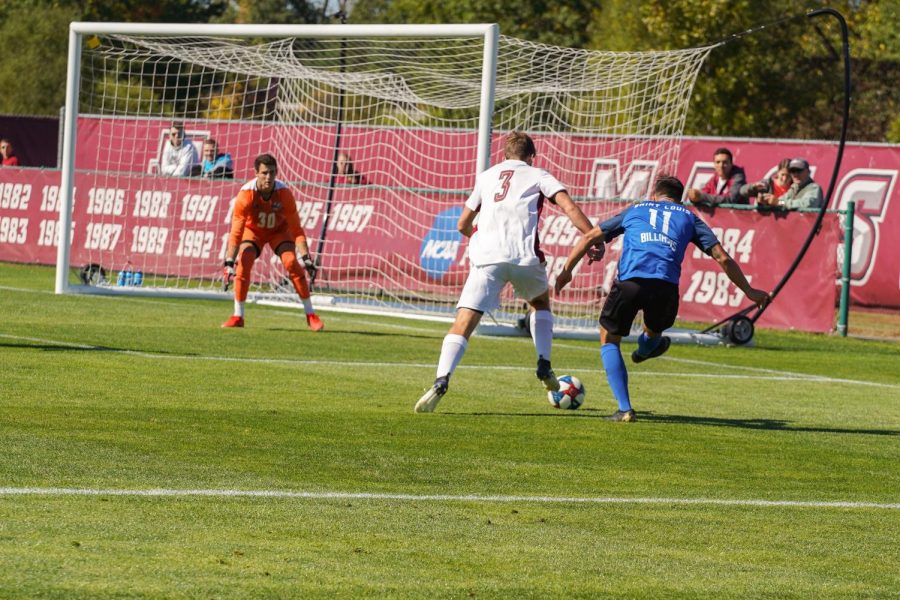 Finally, after so many heartbreaking moments, the Massachusetts men’s soccer team pulled out a win – and not just one, but two goals – against Duquesne Saturday night.

Sophomore Graham Brenner provided the heroics in the Minutemen’s (5-9, 1-4 Atlantic 10) 2-1 defeat of the Dukes (8-5-1, 3-2 A-10), scoring both goals in a second half come-from-behind effort that ended in double overtime. A controversial penalty call put Duquesne up 1-0, but Brenner came through, first to equalize the game for the Minutemen and then to get them out of Pittsburgh with their first win since Sept. 14.

“I’m obviously delighted with the result,” coach Fran O’Leary said. “Come from behind win, on the road, against a very good team when we’re in need of points. Very proud of our team tonight to come from behind. There was a penalty, real unfortunate, just a ball popped up and the referee called a handball on us, put us down a goal. Our guys showed terrific character to claw their way back into this game.”

For a little more than half of regulation, the game looked familiar to some of UMass’s recent defensively competitive, offensively inept heartbreaks. In the 14th minute, a free kick from freshman Evan Fournier almost found the net but came up just short. In the 34th minute, freshman Quinn Serafino missed on a great header look off a free kick. The penalty kick came in the 51st minute to give Duquesne a 1-0 second-half lead.

Then Graham Brenner began to attack the net.

In the 55th minute, Brenner managed to get off a header through contact from Duquesne goalkeeper Robbie McKelvey, but it flew just barely over the crossbar. Three minutes later, Ryan Saul’s long throw once again found Brenner, and this time Brenner wasn’t going to get the opportunity get away from him. For the first time in seven games and just over a month, UMass found the net.

“After we equalized it, that goal gave us energy, and we came on stronger and stronger as the second half went on,” O’Leary said. “We were present to win it in the overtime, so I think we were worthy winners tonight.”

After a scoreless first overtime period, UMass finally put their losing streak behind them when Brenner knocked in Fournier’s free kick. The rest of the Minutemen sprinted onto the field in celebration as the defeated Dukes trudged off.

For eight games, the Minutemen – their roster limited by injuries and inexperience – aimlessly trudged through loss after loss, failing to score a goal in the final seven contests of their losing streak. Something was different in the final game of the streak, though, a 1-0 overtime loss to No. 24 Yale. By bringing a nationally ranked team to overtime, UMass made a statement that despite its troubles, it could be a force to be reckoned with. In beating Duquesne, the Minutemen provided hope that they’re a changed group.

Despite being picked to finish 10th in the A-10, behind where UMass was projected to finish, Duquesne has managed a winning record and the fourth most points so far in the A-10, totals that UMass has failed to approach.

Whether this UMass team can stand up to the true titans of the A-10 will be put to the test on Wednesday, when they face current A-10 top dogs Rhode Island at home.