Kiefiuk tallied a goal and assist 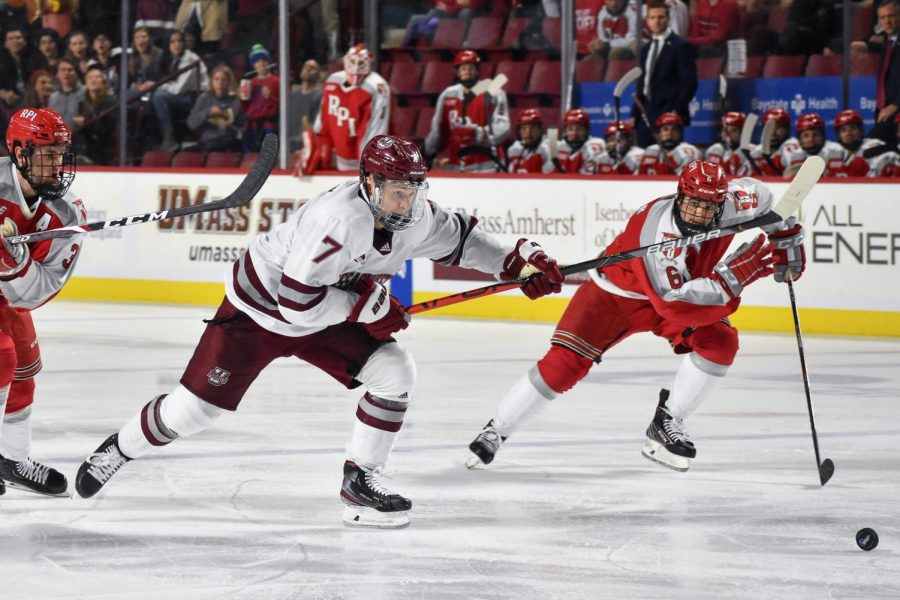 Through 22 minutes of play, it looked as though Rensselaer may have caught Massachusetts hockey suffering from a Frozen Four hangover. Despite losing by an eventual score of 5-3 the Engineers (0-1) held a 1-0 lead early in the second period, outshooting and outplaying the Minutemen (1-0).

Then, with the puck in the neutral zone, in his first collegiate game, freshman Cal Kiefiuk provided a spark for struggling UMass offense.

Just over two minutes into the second period, Kiefiuk intercepted RPI defenseman Simon Kjellberg’s pass. Kiefiuk proceeded to outskate the two Engineer defensemen, putting himself one-on-one with RPI goaltender Owen Savory. Putting the puck on his backhand then pulling it to his forehand, Kiefiuk left Savory flailing as evened the score 1-1, wristing his first collegiate goal into the open left side of the net.

“After it happened it was kind of surreal,” Kiefiuk said. “Obviously the place is a pretty loud building. It’s the first time I’ve been in a building like that. With all these guys congratulating me, it felt pretty good to get my first [goal] out of the way.”

In the first period the Engineers controlled play, outshooting UMass 12-9. RPI also possessed the game’s lone goal at the first intermission. Following Filip Lindberg passing the puck around the back of the net, freshman defensemen Gianfranco Cassaro put a pass out in front of the crease. Engineer center Zach Dubinsky intercepted the pass and buried a wrist shot giving RPI their lone lead of the game.

The second period was a different story for UMass. Started by Kiefiuk’s breakaway goal, the flood gates opened for the Minutemen, scoring three unanswered goals in a 10-minute stretch to take a 3-1 lead into the locker room before the third period. The Engineers’ shot advantage disappeared in the second with UMass taking 19 shots. Outside of the Minutemen’s big second period, they were outscored 3-2

With 16:04 left in the game, RPI netted a goal cutting the score to 3-2. A weak wrist shot by RPI’s Patrick Polino deflected off a UMass player, finding its way into the back of the net.

With the Engineers within reach again, Kiefiuk once again sparked the Minutemen. With a two-on-one advantage, Kiefiuk entered the Engineers’ zone along the right boards. He then backhanded the puck in front of the net to the stick of Reed Lebster who ripped a one-timer past Savory, making the score 4-2 with 15:47 remaining in the game. The score proved to be the difference maker as RPI added their third goal four minutes later.

“I think you saw Cal is a gifted offensive player,” coach Greg Carvel said. “He scores a beautiful goal and he makes a beautiful pass for the assist.”

At Tuesday’s practice Carvel singled out Kiefiuk as a freshman who could make an immediate impact. The Michigan native didn’t disappoint. In his first taste of college hockey, Kiefiuk delivered his two points while playing on the second Minutemen penalty unit.

“It’s very tough to play your first game at this level,” Carvel said. “I don’t care how good you are, if you’re a first-round draft pick or whatever. This is a big step for all these kids.”

“That’s obviously a good start,” Kiefiuk said of his two-point day, “but playing here with [Carvel] and these guys, we know tonight wasn’t our best.”

While Kiefiuk flashed his ability on the offensive end, his play left room for improvement.

“Outside of [his goal and assist], he’s got to get more urgency to his game,” Carvel said “He’s a little casual. That’s what this game was for. [The freshman] are all good kids, they’ll adjust.”

Despite providing the spark UMass needed, Kiefiuk was subject to the same slow start as the rest of the Minutemen. The freshman struggled to get involved in the offense early in the contest. Kiefiuk tallied four shots on goal, all four of them coming in the second period and beyond.

“A lot of it just has to do with getting your feet moving off the start,” Kiefiuk said, “and that’s something I’ve been working on.”

Hoping to avoid another slow start, Kiefiuk and the Minutemen are back in action Tuesday when they open their Hockey East schedule at Northeastern. Puck drop is set for 7 p.m.

Noah Bortle can be reached at [email protected], and followed on Twitter @noah_bortle.