Ellsberg has been welcomed into PERI as a Distinguished Research Fellow 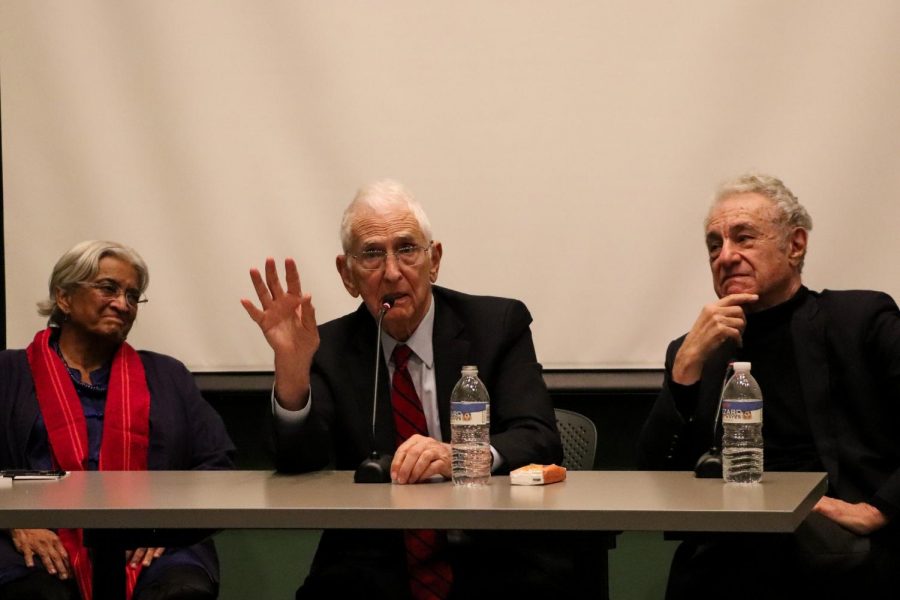 Daniel Ellsberg and Gar Alperovitz spoke at a panel discussion hosted by the Political Economy Research Institute Monday night. This was the first time Ellsberg and Alperovitz have appeared together publicly to discuss their Pentagon Papers experiences.

Attendees first watched the documentary “The Most Dangerous Man in America: Daniel Ellsberg and the Pentagon Papers” which was followed by a light dinner. Every seat was occupied by community members and scholars in black tie dress with journalists littering the free spaces in the room. Around 100 attendees were expected, but a live stream of the panel discussion was offered to those who were unable to attend.

PERI welcomed Daniel Ellsberg as a Distinguished Research Fellow after UMass’ W. E. B. Du Bois Library acquired the historic collection of Ellsberg’s life work including his papers, annotated books and photographs in September. This more than 500 box collection will be managed and put on display by the Special Collections and University Archives. A sample of this collection can be viewed here.

Ellsberg will work in the areas of Peace Economics and the Green New Deal at PERI. PERI promotes human and ecological well-being through their research. Their approach is to improve life on earth now and in the future with their research and policy proposals.

“I am grateful that my papers will be going to the University of Massachusetts Amherst, an institution that is dedicated to the values of openness, equity and social justice,” Ellsberg said in an article. “Sharing these papers with future generations through the archives at UMass Amherst is reflective of that deeply held philosophy.”

“Daniel Ellsberg stands among the most influential and courageous political activists of the past century. He is an exceptional scholar who has been a champion of democracy, truth and free speech. This collection will provide invaluable insight into his expertise in decision theory, his involvement in major chapters of American history – including the Vietnam War and Watergate – and his advocacy against war and nuclear weaponry,” said Chancellor Subbaswamy. “We are proud to welcome Dr. Ellsberg and his wife, Patricia Marx Ellsberg, herself a committed social activist, to the UMass community.”

Last Wednesday, Subbaswamy introduced Ellsberg to UMass alumnus Charles Sennott (class of ’84) in a WGBH conversation at One Guest Street in Boston.

Daniel Ellsberg received his Ph.D. in economics at Harvard University in 1962 before working as a high-level U.S. government war planner during the Vietnam War. He is a prominent whistleblower and risked a lifetime in prison to release the Pentagon Papers. These papers exposed the government for not sharing crucial information and actions in the war in Vietnam with the mainstream media.

Ellsberg was initially charged under the Espionage Act of 1917 with additional charges including conspiracy and theft of government property. He faced a maximum sentence of 115 years in prison. These charges were all dismissed due to government misconduct and illegal evidence gathering discovered during the Watergate scandal.

“Daniel Ellsberg is the role model for all subsequent whistleblowers. In addition, he continues to be very active in fighting for the elimination of nuclear weapons. Nuclear annihilation remains a real and ever-present threat, even though most of us spend very little time thinking about that reality,” said PERI Communications Director Kim Weinstein.

Gar Alperovitz was a co-conspirator to Daniel Ellsberg and delivered copies of the Pentagon Papers to numerous U.S. newspapers. Previously, Alperovitz was a Lionel R. Bauman Professor of Political Economy at the University of Maryland and a Fellow of Kings College at Cambridge University. He also wrote books “America Beyond Capitalism”and “What Then Must We Do?”

Randy Kehler was one of the attendees of the event. A famous pacifist activist, Kehler returned his draft card to the Selective Service System and refused to cooperate with the country’s actions in Vietnam. He served 22 months of a two-year prison sentences for refusing to submit.

Weinstein said of the event, “we want the UMass community to understand to the maximum extent the heroism exhibited by Daniel Ellsberg, as well as his co-conspirators Gar Alperovitz and Janaki Tschannerl. They all risked lifetimes in prison to get the truth out to the world about the immoral war being conducted by the U.S. government against the people of Vietnam.”

Alperovitz and Ellsberg discussed the climate strikes and President Donald Trump’s threats against the White House whistleblower. Ellsberg noted how while there have been other whistleblowers besides himself, there have not been enough.

“People are witnessing crimes and saying nothing,” said Ellsberg in discussing those who overheard President Trump’s call to Ukraine and did not speak up. He continued to say that he hopes the whistleblower keeps their identity a secret because the president has “painted a bullseye on the back” of him or her. Ellsberg also mentioned that during the time of his whistleblowing drama, 12 C.I.A. agents were given orders to incapacitate him.

“Most members of Congress and most politicians are like weathervanes and if the wind doesn’t blow them in one direction, they will not move … it has to do with us and whether we make the wind blow in different directions,” said Alperovitz in agreement.

In addition, Ellsberg discussed the importance of working to free Julian Assange, a journalist and whistleblower who is serving 50 weeks in prison in England.

“What he’s charged with is what we do … he’s actually charged as a journalist which I would say is even much worse … Assange is an enemy of the people along with the rest of press in the eyes of Donald J. Trump and the press better get off their ass and realize what they have at stake here,” Ellsberg said.

Janaki Tschannerl, a Gandhian peace activist, appeared for the first time publicly tonight. Previously fearing deportation to India, Tschannerl finally admitted to being crucial in the distribution of the Pentagon Papers alongside Ellsberg and Alperovitz. Tschannerl encouraged attendees to challenge the state.

“Who is going to challenge and counteract the influence of corporations…if not us?” asked Ellsberg.

Tuesday at 4 p.m., Daniel Ellsberg will hold a lecture titled “The Dollar Auction, Unendable Wars and Gambling with Catastrophe” at the Gordon Hall Conference Room.

“The message is, get off the chair and do it,” said Alperovitz in closing. “History can be built and do not let the cogs that are coming of out the White House fog you over.

Meghan Sorensen can be reached at [email protected] and followed on Twitter @SorensenMeghan.