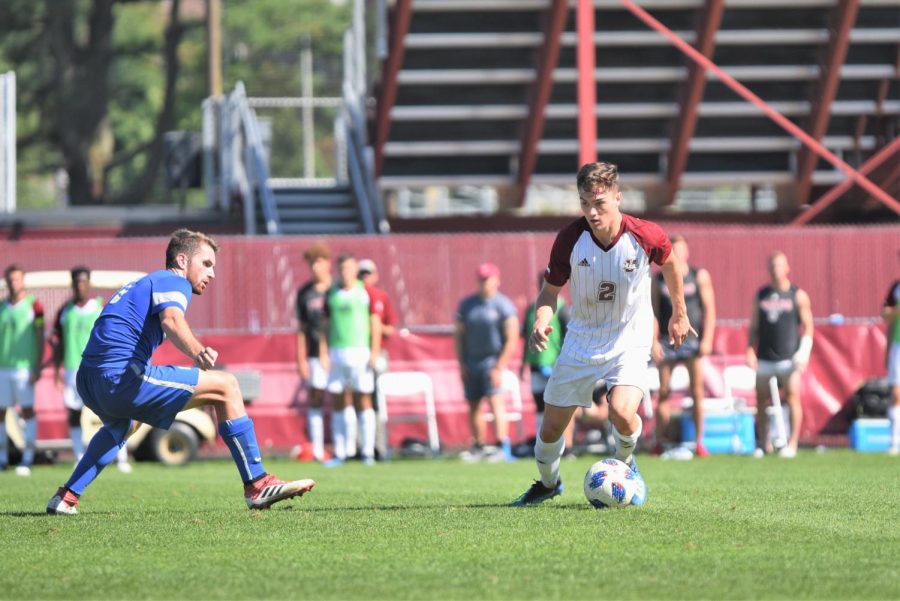 Despite the disappointing result for the Massachusetts men’s soccer team in its match against Saint Louis, junior Eli Cronin brought much-needed experience back into the lineup with his return from injury.

Cronin, who had not seen action since the Central Connecticut State game on Sept. 14, drew a collective sigh of relief among the UMass (4-6-0, 0-2-0 Atlantic 10) fanbase when he returned to his starting spot in the midfield Saturday. The Minutemen, who have dropped five games in a row and have not won since Cronin’s last appearance, struggled to find a leader during his absence.

“It feels really good [to come back],” Cronin said. “It was a tough team to come back against, but it’s good to put a full 90 minutes in.”

Despite a bit of rust, Cronin delivered a great deal of effort Saturday to keep UMass competitive with a Saint Louis team that has managed impressive wins over Davidson and Rhode Island, both projected in preseason polling to finish in the Atlantic 10’s top six. UMass was projected to finish ninth.

“[Cronin] did very well today,” coach Fran O’Leary said. “It was good for him to get a game under his belt. He’s lacking a bit of match fitness but we’re short right now, so we needed to put him in and I thought he did great.”

Cronin’s return is well-timed, given the stacked A-10 conference that UMass faces this year. With Fordham and Davidson comprising its next two matchups, UMass will have to elevate its play in order to pick up some wins. The return of Cronin will undoubtedly make the task easier.

“We’ve got to get some points soon because we want to make the A-10 playoffs,” O’Leary said. “That’s a primary goal of ours. He’s one of the top midfielders in the league, so we’re delighted to have him back.”

Without Cronin and star player Yosuke Hanya, who was injured during the preseason, UMass has shown plenty of intensity, but has struggled with composure and finishing. The burden placed on sophomore James McPherson and freshmen Quinn Serafino, Logan Brown and Ryan Levay throughout Cronin’s four game absence has revealed that these players are talented beyond their years and should be on the field. However, with injuries throughout the roster, these players have been forced into leadership roles without being fully adjusted to the college game.

“We’ve been slacking the last four games, unfortunately we’ve been on a losing streak,” Cronin said. “I think that what we need is that whole leadership role, and not to sound cocky but I’ve been around the game, I’ve had a lot of D1 college experience. Me back out there – me and Chandler [O’Dwyer], both of us – it’s good leadership.”

With the losing streak at five, UMass – which started the season off 3-0 with three clean sheets – now finds itself in jeopardy of not making the A-10 playoffs only two games into conference play. Against Saint Louis, Cronin was clearly not playing at the same level as prior to his injury. For the Minutemen to turn things around, they need Cronin – a fully healthy and fit Cronin – to lead the Minutemen both ways and to help them score first more often.

“I think we had a good performance against Saint Louis today,” Cronin said. “It’s tough losing this game at home and then going on the road – especially all the way to North Carolina – but this game is history now, so we’re looking forward to playing the next game.”

The trip to North Carolina to play Davidson will be the farthest road trip the Minutemen have taken this year. After the game on Wednesday, the Minutemen will return home to play Fordham and Yale. Cronin’s performance will be critical if UMass wants to emerge from this next stretch of games with a win.