‘Afterlife’ is a haunting reflection of our own mortality 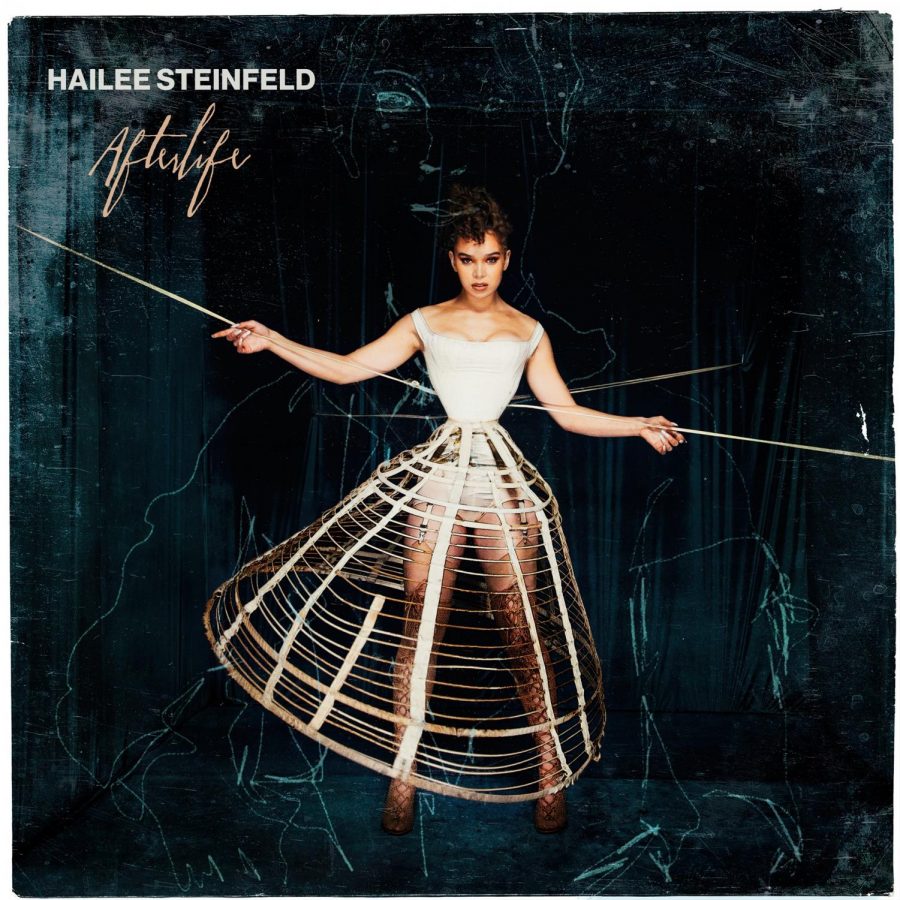 Hailee Steinfeld, well known for her showstopping movie career, has come a long way since she first debuted her singing talent in “Pitch Perfect 2.”

Steinfeld new song, “Afterlife,” originally released on Sept. 19, focuses heavily on humanity’s impermanence on this Earth, which is a stark contrast from the bubblegum pop songs that she has released in the past. The song’s morose themes are a result of the highly anticipated upcoming AppleTV+ show, “Dickinson,” where Steinfeld will play the role of the late famous poet, Emily Dickinson.

Emily Dickinson, one of America’s greatest poets is known  for pushing against the societal and literary boundaries that constricted women during the nineteenth century. Steinfeld, who has been in the film industry since she was young, is familiar with the boundaries that are often imposed on her, along with how to push back against them.

The cover image of “Afterlife” portrays Steinfeld in a hoop skirt corset, tied excruciatingly tight at the waist with strings attached to her wrists. With a mixture of melancholy and repressed anger upon Steinfeld’s face, the art is arguably an allusion to Dickinson, who felt like she was a puppet in a man’s world as a result of the societal restrictions enforced upon her.

Steinfeld drew inspiration from many of Dickinson’s poems, as she co-wrote the song with Stargate, Kennedi Lyken and KOZ. Steinfeld has previously stated in interviews that she has always been passionate about music and although her music debut was untraditional, she always wanted to utilize her music alongside a film production. Given this, it should come as no surprise that the actress would lend her voice to the “Dickinson” soundtrack, because simultaneously investing herself into a character along making music that illustrates the essence of the character is where Steinfeld thrives.

Upon first listen, “Afterlife” is a surprising diversion to the singer’s standard work. It can best be described as a masterful blend of Steinfeld’s and Dickinson’s individual artistic styles. The halting yet bouncy melody, in addition to the poignant diction, is a direct reflection of Dickinson’s writing style.

In an interview with the Rolling Stone, Steinfeld explained how this is her favorite song that she has released to date, with the tone of the song being an indication of the type of music she hopes to release in the future. The opening verse distinctly emulates Dickinson’s tone, “Red eyes, like the smoke we rise / As the candle’s burning low / Trust me in whatever you like / Are you playing with me?” The lyrics are a powerful allusion to Dickinson, who has often been labelled as a nocturnal author because of her habit of using the glow of the moonlight to write in the darkness of night.

When the song  initially debuted, Steinfeld teased an accompanying music video by posting ethereal images and videos across all her social media platforms. On Sept. 30, eleven days after the song’s release, the music video for “Afterlife” premiered and it continued to subvert the ingrained expectations of Steinfeld’s musical style. The music video took on the same haunting tone that the song exudes, but also included scenes of the singer dancing whimsically through open fields, adding a layer of romanticism to the chorus’ lyrics, “Will you promise me you’ll search for us? / Will you find me afterlife?”

The music video for “Afterlife” was directed by Hannah Lux Davis, known for her work in Ariana Grande’s recent music videos. In an Instagram post following the release of the music video, Steinfeld explains some of the recurring themes present in both the song and video, “I want this video to reflect the themes of both the show and Emily’s poetry.”

As an avid fan of Emily Dickinson’s work, I recognized this upon my first viewing of the video. Three images in particular stood out to me. First, an image of Steinfeld as undead, with bugs swarming around her head and accompanied by minions, is wreaking havoc in what looks to be Dickinson’s childhood home, which was coincidentally her final resting place. The scene is reminiscent of the fact that Dickinson continues to live on through her poetry, due to her work being published after her death, along with being labeled reclusive because of her comfort in solitude as well as her innate attachment to both her childhood home. The second piece of imagery depicts Steinfeld in a young man’s clothing, traditional of the time period, as she intones “Fire in my veins / Drink deeply love.” This can be seen as a nod to the fact that throughout history, Dickinson has been characterized with male attributes because she was never married and was able to make a name for herself in a male-dominated society.

The last image shows a different side to Dickinson than we have been privy to see throughout history. Steinfeld wanders through an open field wearing a white bridal corset and a lace veil, attire most often associated with a wedding. Through this video, Steinfeld details all the various sides and conceived perceptions of Emily Dickinson, thus, revealing more of who truly is she, rather than how history has taught us to believe.