Heading into opener, starting goaltending still remains up in the air for UMass Hockey

Carvel and company plan to go with the hot hand 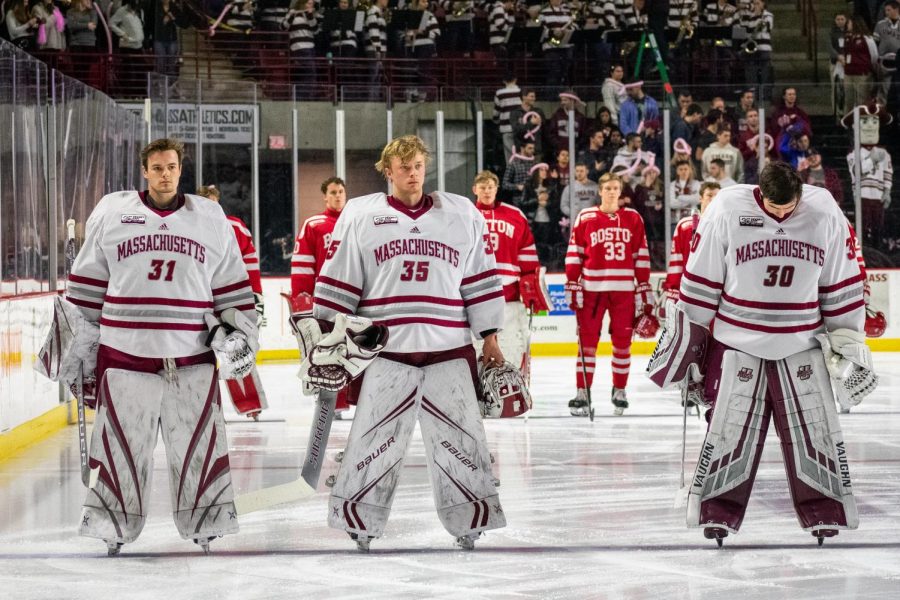 The Massachusetts hockey team has a serious balancing act ahead of it.

With the long-awaited opener set for Friday night against the Rensselaer hockey team, UMass has yet to announce a starting goalie.

And that’s not to say it was expected that they’d come right out and say it. Nobody was surprised during Tuesday’s media availability when head coach Greg Carvel gave a stern “no” when asked who would be between the pipes on Friday night.

The Minutemen have two goalies who are worthy of the starting job: sophomore Filip Lindberg and junior Matt Murray.

Murray was famously pulled in Game 1 of the Hockey East quarterfinals last season vs UNH after allowing three goals on 14 shots, which paved the way for Lindberg to own the net for the rest of the postseason.

So, what’s the plan in net for this season?

“Whoever we feel is going to give us the best chance to win is going to play,” assistant coach Jared DeMichiel said. “I hate to Bill Belichick you and whatnot, but we’re not looking past RPI. We’re very fortunate that we have two guys that can play the net for us. We’re lucky where when one’s not playing well, we’re comfortable putting in either one.

“And we feel like both of them can win us games.”

Murray played in 27 games last season compared to Lindberg’s 16, as the Espoo, Finland native missed a small portion of the second half in 2018-19.

Despite losing the starting job at the very end, Murray’s mindset remained focused all summer.

“Honestly, it’s just doing what I can,” said Murray. “Winning games when I’m in the net and being as good a teammate as I can. I’m sure that both [Lindberg] and I are going to get our opportunity and I just have to make sure I’m maximizing mine when that opportunity comes.”

The opportunity could come at any point, which creates big competition between Murray and Lindberg. Neither goalie really seems to mind.

“I feel like there are a lot of pros and cons for that,” said Lindberg of having to share the net. “Obviously Murray’s a good goalie and we push each other out here every day, so I feel like there’s a lot of good things and bad things. But I’m ready to play all the time.”

Though it might seem like forever ago, Murray did have a huge year for the Minutemen in 2018-19. His 20th win of the season over Merrimack set a new program record. He finished the first half of the season 11-0 and won Hockey East Goaltender of the Month after going 6-0 in November.

But that’s now all in the past, and Murray finds himself having to share the net and constantly compete for his job.

“I say there’s pros and cons to both,” the St. Albert, Alberta native said. “The competition is great because you’re never comfortable. There’s never a time when you could get complacent as you could if you were the go-to guy. I think that’s what we have here – just two guys with great, healthy and friendly competition and I think that’s the best thing possible for both our developments in the long run.”

The coaching staff is all-in on the competition for the net. If anything goes to show their mentality it’s that in practice, when a goalie lets a puck past them, they’re out and in comes somebody new.

“I think if anything, it positively affects them, where they know they can’t let their guard down,” DeMichiel said. “You have to be good every single day and if you want to start that game on Friday night, you know you’re going to have to have a good week of practice. That’s good to always play at a high level. I think it’s when you take your foot off the gas – that’s when bad habits and that’s when negative things happen.

“If you’re working hard, extremely focused and extremely committed, usually good things are going to happen. I think it’s only a positive thing.”

In DeMichiel’s eyes, Murray’s more willing to “sell-out and can maybe throw the kitchen sink” to make a save. Lindberg’s glove looks better, and his rebound control got cleaner over the summer.

The assistant coach, who’s known for his goaltending expertise, also made clear that Murray’s urgency in his game isn’t a recent occurrence to account for lost ground to Lindberg.

It’s something that’s always been there.

“Matt practiced super hard all through playoffs and I think it’s rolled into this season,” DeMichiel said. “He’s practiced extremely well. There’s been a healthy competition for the last year or so between [Lindberg] and Matt, and I think it’s going to continue into this year and make them both better goalies.”

Now it all boils down to who gets the nod for the opener. And if there’s one thing for certain it’s that whoever doesn’t get the start will be gunning for the next one.

That’s just how it’s going to be.