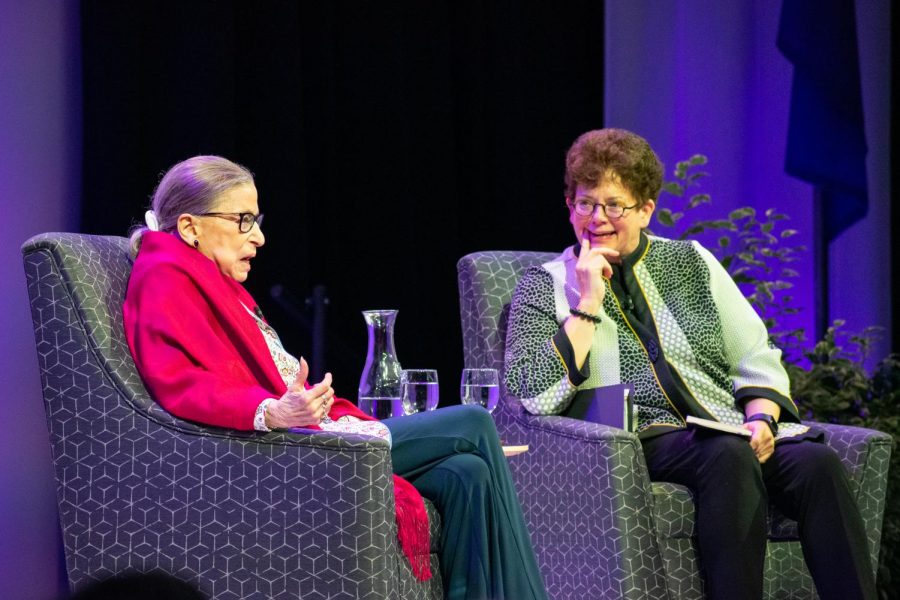 On Thursday night, U.S. Supreme Court Justice Ruth Bader Ginsburg conversed on stage with Amherst College President Biddy Martin in a talk which highlighted her early career, journey to becoming a Justice and some of the cases she has presided over.

Introducing the Justice was Andrew Nussbaum, president of the Amherst College Board of Trustees, who said that Ginsburg is an “honored part of the [Amherst College] Class of 1991”, referring to the honorary degree awarded to her two years before being appointed to the Supreme Court. “I like to think Amherst College discovered her long before President Clinton did.”

Nussbaum had also previously served as a law clerk for Ginsburg and reflected on what he learned under her guidance.

“You needed to learn to dissect the arguments from litigants,” he said. “You needed not to assume the answers, but to test them and to work with them. Not to guess the facts, but to verify them. And not to give in to rhetoric in favor of reason.”

The talk began with a surprise serenade for the Justice by the Amherst College choir, after which Martin prompted the Justice about her love for opera music.

Ginsburg recalled becoming hooked on opera at the age of 11 while still living in Brooklyn. “I was just blown away by the magnificence of the music,” she said.

She furthered that, to this day, “When I go to the opera, all the briefs and opinions are put on a high shelf, and I just enjoy the glorious music.”

The discussion then moved on to focus on Ginsburg’s early career, where she reflected on the adversity she faced being a female scholar and professional.

As a student at Cornell University, Ginsburg remembered being one of very few women, the ratio of men to women being 4-to-1. She added, “and the women happened to be smarter than the men.”

Also at Cornell, Ginsburg recalled meeting her husband-to-be, who she said was “so secure in himself that he would never have thought [her] a threat or competitor. Instead, he was [her] biggest booster.”

Ginsburg then moved on to attend Harvard Law School in 1965, only five years after they began accepting women into the program. At the time, she said she wanted to study law in order to “get a paying job, but at the same time, do something that would make things a little better in [the] community.”

Yet, she said “little did I know” that, because there were no laws at the time against discrimination on employment, law employers could put up employment sheets that said “men only.”

However, she continued, “The changes that I have seen in my long life make me optimistic for the future. And especially optimistic about the people in this room, and what you will do to repair tears and divisions in our society.”

Martin moved on to ask Ginsburg about the tributes she has made to trailblazers in the past, wondering if the Justice had a favorite tribute that she has delivered.

Ginsburg spoke about Pauli Murray, a civil rights activist who “is at last being recognized for the trail blazer that she was, and I consider it my great fortune to have had a close relationship with her.”

Murray wrote an influential book titled “Jane Crow and the Law”, which Ginsburg said drew attention to the barriers that women face “simply because they were women.”

“It was kind of my marching order for the next 10 years to get rid of Jane Crow laws,” she said.

Martin also asked Ginsburg “What advice do you have for young people about the importance of friendship for democratic institutions and how to build them despite differing opinions?”

In response, Ginsburg spoke about her relationship with the late Supreme Court Justice Antonin Scalia, who often opposed Ginsburg’s opinions in the courtroom.

After telling the story of one instance in which she and Scalia opposed one another, in United States v. Virginia, the Justice spoke about their shared passion for writing and opera.

“We are different. We are one,” she said. “Different in our approaches to reading a legal text, but one in our reverence for the institution we serve and for the Constitution of the United States.”

The conversation then moved on to Ginsburg’s eventual appointment to the Supreme Court, where she had a moment to reflect and touch on her family and New York upbringing.

Martin then prompted, “Where do we stand right now with respect to rights? Are we still on the path that you define as progress?”

Ginsburg replied, “We certainly have made huge strides … There is still discrimination on the basis of race, gender. It’s true that most of the classifications… are gone from the notebooks. But what remains is what has been called unconscious bias.”

During the question and answers period, one member of the Amherst College community asked the Justice how she believes this part of history will be characterized in the future, to which she chuckled and replied, “As an aberration.”

Multiple attendees also asked the Justice about the role that she believes that the Supreme Court plays in impacting and influencing current day issues.

“The Supreme Court doesn’t have an agenda of its own. It doesn’t decide and then take care of this area or that area.” Ginsburg said.

She added,“It is a totally reactive institution. It depends upon people bringing cases before us that will present the issue.”