Lessons from the production ‘Baltimore’

Don’t be afraid to have the conversation 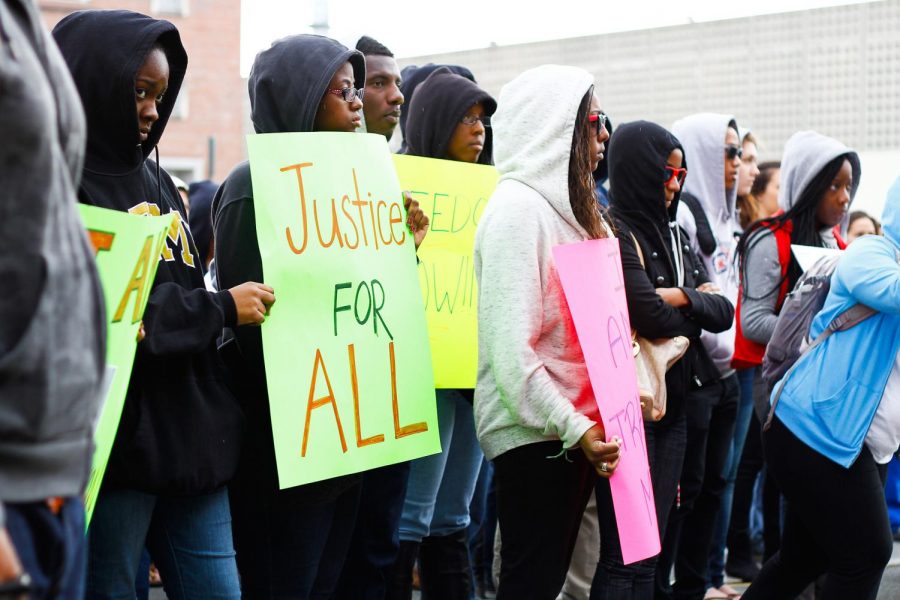 By By Jennie Moss, Collegian Contributor

“Fine, so I’m just the white guy. So I can’t say anything right or true about race.”

So says Carson, a character in the University of Massachusetts theater department’s ongoing production of the play “Baltimore,” which tackles a sensitive, important subject on today’s college campuses: racism. Told through the perspective of Shelby Wilson, an African-American resident advisor whose hall is the site of a racially-charged incident, the play shows just how intimidating it can be to talk about racism amidst worries of saying the “wrong thing,” offending someone or — especially for white people — being called a racist.

Perhaps it would be easier to talk about if we thought about it differently. The mainstream media tends to frame racism as isolated, extreme cases where racists are a few “bad apples” in a sea of good people. But these representations do us a great disservice when it comes to understanding racism because they fail to explain its history and how it goes far beyond individual acts.

In his 2014 Massachusetts Daily Collegian article “There is no such thing as ‘reverse racism’,” Josh Odam wrote, “People have to understand that the term racism is an indicator: it identifies a network of structures and institutions (the state, the police, universities, corporations, banks, etc.) used to oppress and marginalize entire populations.” The early development of these institutions in the U.S. is so important because once such a foundational system is put in place, it becomes very difficult to change.

In his 2015 memoir, “Between the World and Me,” Ta-Nehisi Coates elaborates on this significance by saying that “race is the child of racism, not the father.” Only after African scientists, doctors, architects, teachers, entrepreneurs, fathers, mothers, sons, daughters and others were kidnapped from their homes did those we now define as white impose an arbitrary definition of inferiority based purely on skin color. This definition functioned both as a way to clear their own consciences of any moral wrongdoing, and to redirect the social and economic frustrations of poor whites toward a social “other.”

But just because slavery was formally abolished doesn’t mean that the racial hierarchy that justified it ended, too. Not long ago, during Jim Crow segregation, it was normal for white people to be publicly, overtly and intentionally racist, behaviors that our mainstream society now condemns. But some schools are more segregated now than they were in the late 1960s.

While no single white person alive today created this system, it continues to benefit white people. It does this by promising that our race will never work against us— when participating in class, when applying for jobs, even when eating ice cream in our own apartments.

But what’s important to consider about this system is that it is self-perpetuating. Once such a system is put in place, it doesn’t require that white people be intentionally discriminative — it only requires our complicity and acceptance of the system as normal. And to accept that it is normal for some people to live in fear of harm while others live safely is a poisonous, soul-contorting belief.

As uncomfortable as it may be for white people like myself to grapple with this reality, it is not nearly as uncomfortable as fearing that your loved ones may not survive police encounters, or wondering if the person who wrote “Hang Melville n******” almost a year ago in Melville Hall was talking about you.

White people’s racial illiteracy harms people of color every day. But it also damages our ability to be empathetic and hold ourselves accountable for the impact, more so than the intent, of our actions. And becoming a less racially ignorant white person is not about wallowing in guilt, or about reading a lot of articles and then showing off how much you know about other people’s pain. It’s about humbling ourselves enough to confront the truth, and using that as a starting point to reflect and learn more, primarily from activists and educators of color, and especially women of color.

It’s white privilege in action to not have to talk or even think about racism until you see reports of a racist incident, such as the one we see depicted in “Baltimore.” Hyper-focusing on these acts rather than understanding the larger picture of why these incidents keep happening ensures that these incidents will continue to happen. As Leigh, a Black character in “Baltimore” explains, “The problem is all this history, all this history folds into itself and over itself and there’s all these lines.”

Adopting an expanded vision of racism as a system is in no way the end of understanding it, but it is a necessary starting point.