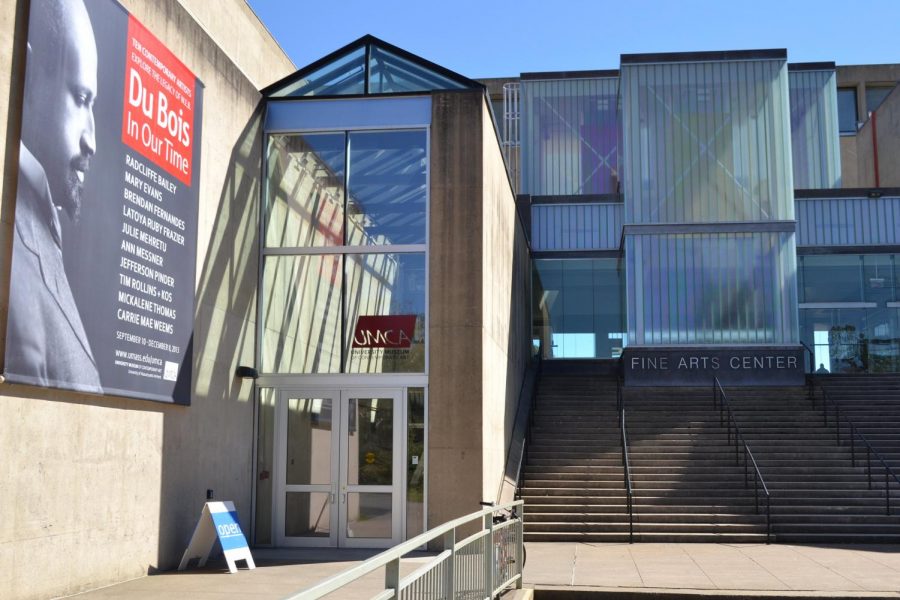 As part of the University of Massachusetts’ annual Family Weekend, the Fine Arts Center  hosted Lightwire Theater as they performed their original show “Dino-Light” on Sunday afternoon.

The New Orleans-based group combines music, dance, puppetry and technology in their performances and has built a following since becoming semi-finalists on NBC’s America’s Got Talent in 2012. “Dino-Light” follows the story of a scientist and his dinosaur, who wanders away from home but discovers true love on his journey back. The name of the show comes from the actors’ use of “el wire”, which are similar to LEDs, to create their light up characters.

Prior to the performance, which sold over 1,000 tickets, various science-based organizations in the FAC lobby connected with the scientific theme of the light-based show, which focused on dinosaurs. One booth, the Jurassic Road Show, showed off local fossils from the Pioneer Valley. Dr. Harry Sharbaugh, the collector of the preserved imprints, explained that their goal was to teach children and spread knowledge of science.

“We, and most of the folks here too, are committed to the concept of education; particularly, trying to stimulate young minds,” Sharbaugh said. “That’s the whole idea of this.”

The UMass Science Outreach Club, the Beneski Museum of Natural History and the Eric Carle Museum of Picture Book Art were just a few of the many groups also involved in setting up interactive materials for the visitors.

The main event, “Dino-Light,” attracted children of all ages and their families. Lora Barrett, a senior lecturer in the UMass Department of Art, watched the show with her husband and grandnephew.

“He loves music, he loves theater, he loves dance,” Barrett said when explaining their reasons for attending.

Shawn Farley, the director of marketing at the FAC, was especially excited to host Lightwire Theater. She explained that the FAC’s goal was to put on a variety of programs that would be of interest not only to the students but families as well.

“This work caught our eye because it uses technology and lighting in interesting ways [and] it tells a wonderful story,” Farley said.

Michael Sakamoto, the associate director of programming at the FAC, echoed this sentiment, saying the show is the “latest in an ongoing commitment” of the center.

After the performance, the performers came on stage to take their bows and explain how they put on the unique glow-in-the-dark show. Their costumes and props are all custom made by the group itself down in New Orleans using a variety of common household items, including skateboards and shin guards, along with the El Wire, which illuminates each actor in the dark theater.

Lightwire Theater continues their tour with a second showing of “Dino-Light” at the FAC’s Concert Hall on Monday, Oct. 21.