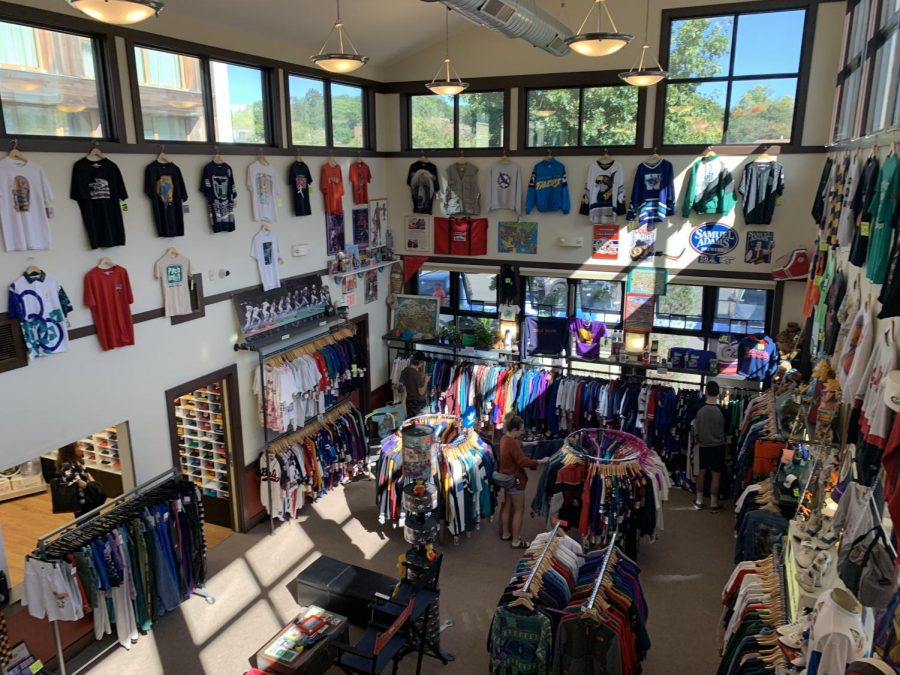 By Leigh Appelstein and Cassandra McGrath

Owners Maddison Dyment and Daniel Williams are 2016 graduates of the University of Massachusetts with degrees in psychology and animal studies.

Dyment explained how her fiancé and co-owner Williams started the business during his sophomore year of college by selling snapback hats as a part time job. The co-owners then took their business to the next level when Williams hired Dyment as a co-owner in September of 2017, where MassVintage based sales through Instagram, Depop, and Ebay.

Williams’ dream became a reality this year as they expanded beyond selling to their 29.4k Instagram followers to opening their first physical store location.

“He has always wanted to have a store, that’s been a long time goal,” said Dyment. “To be able to be here in a spot that we love, doing what we love, it really is a dream come true.”

Inspired by nostalgia, the new vintage clothing store shows prospect of becoming a beloved member of the downtown Amherst community, already attracting students from all schools in the five college consortium and citizens of the pioneer valley.

Alyssa Brooks, an Amherst resident has already been into the store twice. “I’m just getting a shirt before work,” she said. “It’s pretty last minute but there’s a lot of cute stuff in here.”

Graduate students from the Isenberg School of Management chose Mass Vintage for an assignment in Alan Robinson’s business consulting class. Josef Durand, a first year graduate student in Isenberg, said that when deciding which business to consult, Durand was drawn to Mass Vintage. “When I walked in it was like a blast of nostalgia,” he continued saying he had “immediate feelings from my childhood when I stepped inside.”

“It was not only compounded by the products, but by the people. They aren’t just trying to make a profit like any other business, they really want the items to find a proper home.” Durand continued, “I could see this being a local gem.”

In the infancy of their business, Williams and Dyment handpicked clothes at thrift stores and accumulated about 200 items that they kept in a warehouse. Now they have approximately 5000 to 7000 items which they sell instore and online.  As vegan business owners, Williams and Dyment also incorporate a sustainability aspect by upcycling clothes and not giving out bags to reduce plastic.

Williams wanted the decor to make the store feel as customers are walking into someone’s childhood bedroom or parent’s basement ornate with their dog Lewis running around the store, VHS tapes and toys from the 90’s and early 2000s.

“Every article of clothing in here would have been thrown in the trash eventually,” said Dyment. “It is so cool to take it clean it and find it a new home rather than just dump it.”