No. 4 UMass split its opening slate of games against Rensselaer and Northeastern 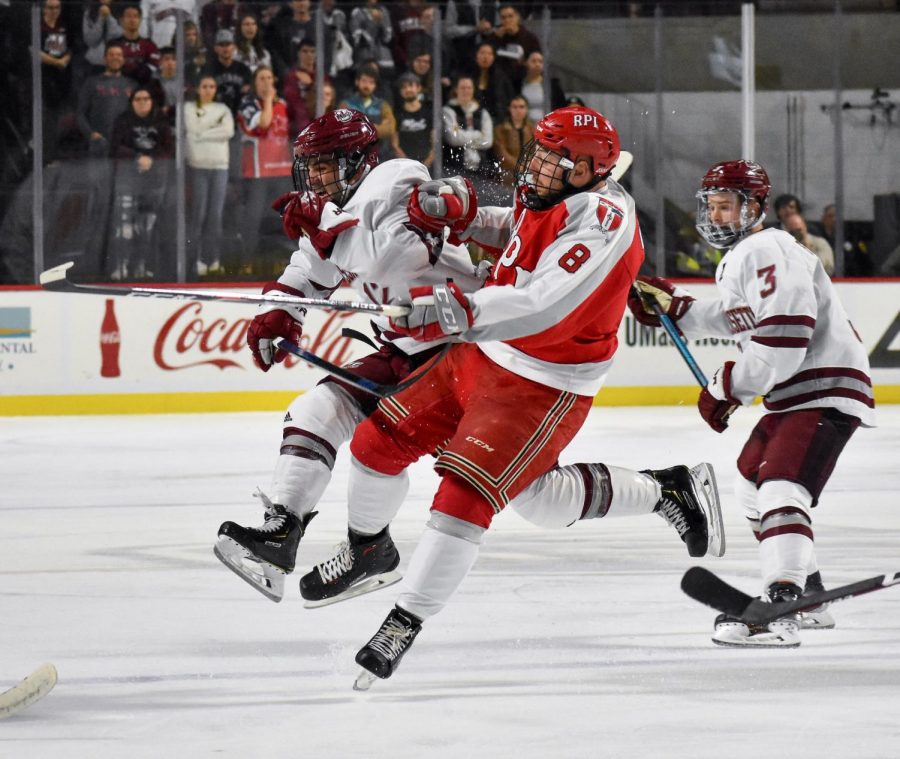 After splitting its first slate of games with a home win over Rensselaer and a chaotic, penalty-ridden loss at Northeastern, the Massachusetts hockey team is setting its sights on Union this weekend.

With a short week and three games in five days, the Minutemen (1-1, 0-1 Hockey East) face a quick turnaround. Following Tuesday’s defeat in Boston, they quickly return home to host the winless Dutchmen (0-4) on Friday and Saturday night.

Neither of the season’s first two games were the prettiest of outings for UMass as a whole, but that’s expected out of college hockey in the first month of October, and the Minutemen are using them as a chance to keep dissecting their game.

“We won one game and lost one game, but I think the outcome’s not the point here,” senior captain Niko Hildenbrand said after practice on Thursday. “I think we just have to keep pushing every day to get better. It’s getting comfortable with being uncomfortable and that’s kind of the goal here.”

With a nine-player freshman class and the absence of Marc Del Gaizo’s leadership in the defensive end – Del Gaizo won’t return to the lineup until Oct. 25, according to coach Greg Carvel – the Minutemen are still learning about their style of play, developing areas of their game through early trials and tribulations.

One of those areas is on the man-advantage.

On Tuesday against the No. 15 Huskies (3-0, 1-0 HEA), UMass was held scoreless on each of its five power plays, which is an area it will look to cash in on when the opportunities arise this weekend. The Minutemen are just 1-of-5 on the power play through their first two showings, but the unit is moving in the right direction, Carvel said, returning to the form that made UMass’ power play the most efficient in the nation last season.

“We were slow moving the puck, a little methodical,” Carvel said after the loss. “It’s early in the year. Until you get the reps in the games it’s tough to get a flow, but it’ll come. I like the two units. I thought they moved the puck pretty well, had a lot of chances, just didn’t get rewarded.”

The major aspect the Minutemen are looking to improve from their early-season showings is the lack of that tenacious, physical style of play that made them such a dominant force to match up with last year. Alongside three freshman defensemen, the physicality that is so crucial just hasn’t shown.

“We need to be a harder team,” Carvel said. “We’re just not [playing a] real hard [game] right now.

With two more games before Del Gaizo returns, the Union series is an opportunity to step it up. As the main captain, Hildenbrand is putting it on his shoulders to reinforce the message with the team.

“I think the biggest thing is we can be better,” he said. “It’s communicating the message to the team, doing it myself, leading by example, and I’ve got to play harder and take accountability for that.”

The Dutchmen hung tight with No. 15 Northeastern last weekend, falling 2-1 on both occasions, so it won’t be easy for the Minutemen to walk away with two quick wins, but that’s just what they need as they continue to grow: another test.

After the Union series plays out followed by a one-off with American International at the Mullins Center next Friday, UMass will return to Matthews Arena for a rematch with the Huskies on Nov. 1, this time with Del Gaizo on the ice, to see how far it’s come.

For now, though, it’s one game at a time, and that starts on Friday at 7 p.m. against the Dutchmen.

“We’re nowhere near the standard we need to be,” Carvel said. “But that’s what these games are for, so hopefully we’ll take a step tomorrow.”