Trivigno and Lebster each recorded two goals in the win 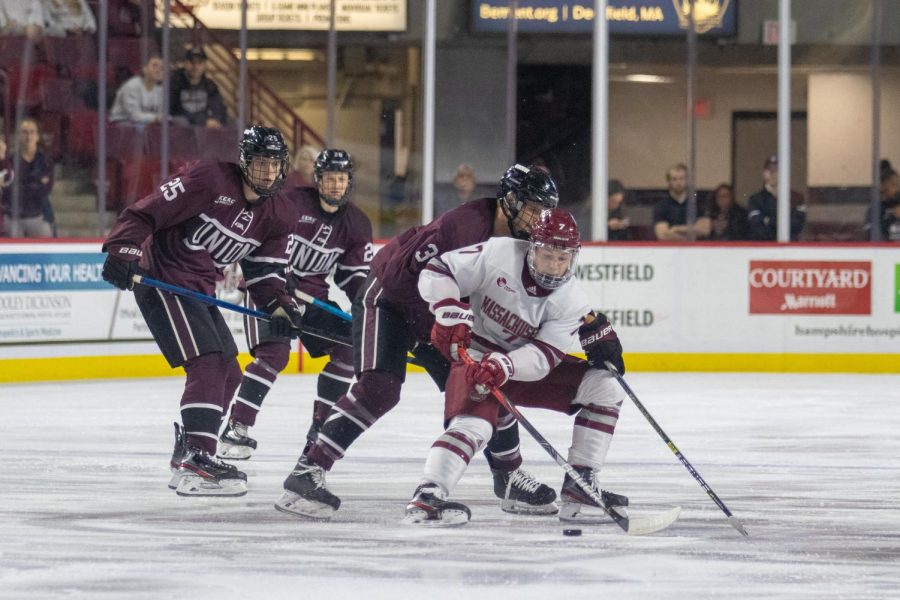 After a scoreless first period, the Massachusetts hockey team potted three goals in the second before opening the floodgates, downing Union 6-1 at Mullins Center to open the two-game set.

The Minutemen (2-1, 0-1 Hockey East) came into the Friday night affair on a mission to bounce back from Tuesday’s loss and play with a tougher style, and they certainly executed that with two goals from Bobby Trivigno and Reed Lebster, and one from Zac Jones and John Leonard.

On Jones’ 19th birthday, the freshman recorded a trio of points with assists on Trivigno’s second of the night and Lebster’s second of the year. Leonard and Ty Farmer also recorded multi-point nights in UMass’ second victory of the season. Shots finished 47-17 in favor of the Minutemen.

“I thought we were a faster team tonight because we managed the puck much better,” Carvel said. “We got the puck up ice much more effectively, good heavy shifts in the offensive zone.

UMass got off to a hot start in the first period with a handful of solid chances and pretty consistent pressure on Union goalie Darion Hanson but wasn’t rewarded out of the gate.

“One thing we talked about was our fast start,” Leonard said. “We didn’t score in the first period, but we were doing all the right things. A saying we talk about a lot is pounding the rock and we talked about that in between periods and we just kept on doing it and eventually they would fall.”

And fall they did.

37 seconds into the middle frame, Jack Suter entered the Dutchmen zone and found an opening at the left faceoff circle, sliding a pass over to Trivigno crashing the net for an easy tap-in goal.

The sophomore was back at it again 10 minutes later, this time on the power play. On a crisp feed from Jones through traffic from the left dot, Trivigno wound up and ripped a low one-timer over Hanson’s pad. His second tally marked the second Minuteman power-play goal of the season.

After UMass went up 2-0, Union got one back three minutes later. On a delayed call on Anthony Del Gaizo in front of Matt Murray in net, that took the goaltender out of position, Sam Morton capitalized.

The Minutemen were quick to respond when Jones picked up his second assist with ten seconds remaining in the middle frame, lofting a shot that Lebster tipped in for his first goal of the night.

With a 3-1 advantage entering the third, UMass kept its foot on the gas, finishing with a bang.

Coming off the opening faceoff for the final 20 minutes, Leonard was denied when he went to the net. He quickly got the puck back on his stick and, this time, he didn’t take no for an answer. After several productive chances in the first two games of the season, No. 9 finally cashed in a shot when he cut across the net-front area and slid a quick backhander for his first of the year. His goal just 25 seconds into the final frame marked the 30th of his UMass career, making it 4-1.

Two assists wasn’t enough for Jones on his birthday. 13 seconds after Leonard’s tally, he scored the second goal of his career off a faceoff win from Del Gaizo. After collecting the puck at the top of the left dot, he let go a wrist shot that found its way past Hanson to push the lead to four.

With time winding down, Lebster collected his second of the night, tipping home a Colin Felix shot from the right point to finalize the score, 5-1. The freshman has three goals on the season.

Making his second-straight start in net, Murray made 16 saves in his first win of the season.

“Murray really looks good to me,” Carvel said. “He looks really comfortable in the net. I thought the few tough saves he had to make; he did a great job. Obviously, it’s tough to prevent a goal when you’re not in the goal, but he played well enough tonight to earn a shutout in my mind.”

After a somewhat rocky start in the opening two games of the season, the Minutemen returned to Amherst and did exactly what they set out to do, all the while dressing several freshmen skaters.

“Our first two games were pretty uneven, and tonight was a much better indication for me as a coach for what this team can be,” Greg Carvel said. “I think we dressed eight freshmen tonight, so I knew it was going to be a really young lineup. Really needed to see that group start to figure out how to play at this level and tonight I thought they did and made us a pretty effective team.”