Q&A with Alex Amato, an Amherst country and pop singer-songwriter 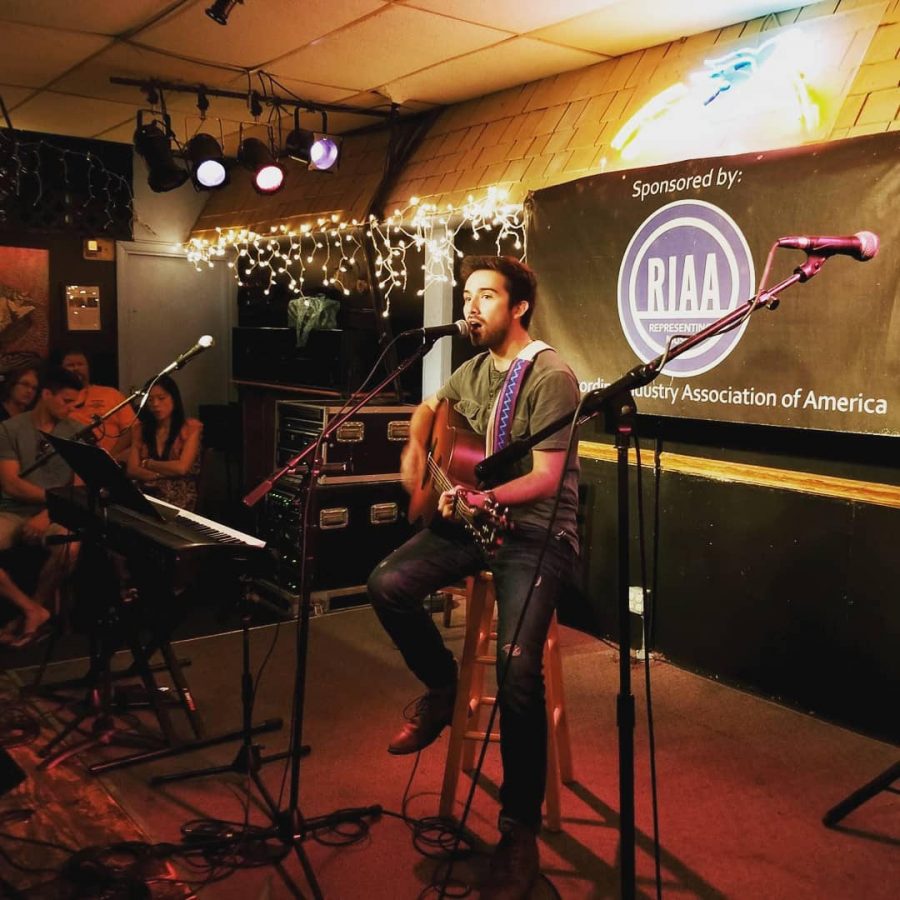 Alexander Amato is a senior at the University of Massachusetts, majoring in chemistry and minoring in music. He started taking singing lessons at UMass only a couple years ago and picked up a guitar for the first time as a senior in high school. Last week, he performed at the iconic Bluebird Café in Nashville, Tennessee.

Graced by distinguished artists like Garth Brooks, Keith Urban and Taylor Swift, The Bluebird Café is known as a birthplace for up-and-coming country songwriters. The café’s annual Golden Pick Contest begins in August, with the café choosing an aspiring singer-songwriter is chosen from Instagram to perform at The Bluebird Café.

Amato was chosen as the first winner in the 2019 contest with his soft, soulful original, “Beat Up Motorcycle.” When asked about his music, he describes his wide range of influences spanning from country to classic rock, classical, pop and even R&B. His self-titled EP was released in May 2019 and is available to stream on Spotify, Apple Music, iTunes and YouTube.

Madison Cushing: How was Nashville?

Alex Amato: Really awesome. It was a totally different world from here. Just the amount of music and the kinds of music that you hear. Bigger city, obviously. Really cool place. It’s really got me wanting to move there after this year.

MC: Do you have a favorite moment from your trip?

AA: I think my favorite moment was going to soundcheck studios. It’s almost like this huge industrial park of studios and rehearsal spaces for huge country acts. There was the Taylor guitar showroom in there and I got to sit in there and play all their cool guitars. They took a bunch of videos of me that they’re going to post on YouTube and Instagram.

MC: Can you describe the feeling of actually being on that stage at the Bluebird cafe?

AA: It was very different from stuff I normally do where I sing my own music. Normally there’s nerves. I mean, there were nerves, but it wasn’t as bad because it felt like I didn’t have to prove anything; I’d already won. So, I just tried to enjoy it as much as possible and take it in and think about the people that had played there before. Just the fact that I was singing my song there was really cool.

MC: I would think it would be so much more intense at a place as iconic as that in somewhere as far away as Nashville. Do you have ways to quell that anxiety when you are feeling nervous before a show?

AA: I really don’t. I don’t have any weird tricks that I use. Some people, you know, meditate or do some weird stuff. I think honestly it just comes with time. I used to shake so much and I couldn’t breathe on stage when I first started a couple of years ago. That kind of subsides from becoming comfortable and knowing that you deserve to be there. Now it is what it is. Sometimes I’m nervous, sometimes I’m not.

MC: You didn’t start playing until you were a senior in high school, is that right?

AA: Yeah, that’s correct, acoustic style. I played when I was younger, maybe in middle school, like fifth and sixth grade. I played a little bit of electric guitar just because I like to do solos. I don’t remember if they were any good or not. Probably not.

MC: Did you have a plan before music took over?

AA: Yeah, I was going to be a doctor. A medical doctor.

AA: Definitely. I suppose I may still be a doctor of chemistry, but I don’t know. The medical phase faded a lot when I thought about the work, it’s pretty intense, but I’m super happy with chemistry. I loved chemistry in high school. That was going to be my major regardless. I love chemistry and I’m just going to continue to do that. Why would I stop now?

MC: You started playing your senior year. What made you do that?

AA: I think it was the musical influence that I was hearing at the time, and the fact that I was going through that weird phase of going to college and being angsty and whatnot. So, I’d write a lot of poetry and stuff, eventually tried to put it to chords. It was just very much my speed and my style at that time, that acoustic singer songwriter-y music. I started getting singing lessons after my first year of college.

MC: Where did you get lessons?

AA: Through the music program. At the time I wasn’t a minor, but I could still take them, it’s like an elective. You take a 30-minute lesson every week. I started doing that and then I decided I might as well just do the minor, so then I had to take theory and stuff like that.

MC: When you started, did you have any hope or idea that it would end up like this?

AA: I think I maybe had a hope. I mean, I don’t think I was assuming anything at the time. Because I could barely, like I said, get on stage. I think I knew this is something I wanted to do alongside with chemistry so I committed to it and I kept working on it and it’s just kind of slowly built to whatever it is now.

MC: Do you have a favorite song out of the three on your debut EP?

AA: You know, a guy just asked me that in the last interview and I said I liked certain things about each of them, which I guess is what you expect me to say. Although there are ones that I like to play more, like the last one, “Too Good for You.” That one is just one that’s more fun to play for me and the first two are getting old to play.

MC: You recorded the EP in a legitimate studio?

AA: Yeah, I was playing with a country cover band in the area here. The guitarist’s brother works at Zing Recording Studio in Westfield and he took the project on. We originally had way more songs in the works, but it was taking too much money and time, so I just settled on three for now.

MC: What was it like going from your bedroom to that?

AA: It was really cool. From recording on my laptop to being in this old studio with all these instruments and crazy tech. It was intimidating. It took a couple of sessions before I could actually sing correctly. It’s like I forgot how. I was more nervous than I’ve ever been on a stage. But they were really great. They were super supportive and did everything they could to make me comfortable. I suppose that’s their job, but, very cool guys.

MC: Do you write your songs completely by yourself?

AA: Yeah. Everything I have out so far is strictly me. I’d love to do some co-writing but that’s a whole new beast in itself. You have to find somebody that you really resonate with.

This interview has been edited and condensed for clarity.