Recruiting will be key to UMass becoming a perennial contender 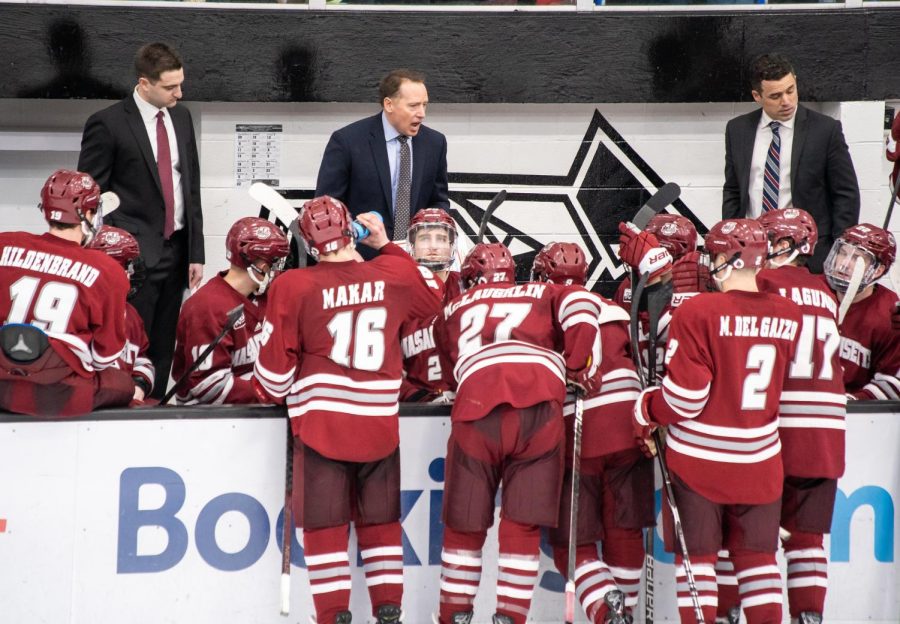 With a goal horn blaring, fans going wild and a pile of Minutemen growing in front of the Massachusetts’ bench at the KeyBank Center in Buffalo, New York, UMass’ coaches shared hugs and congratulations, having just pulled off one of the most unlikely turnarounds in college athletics, advancing to the National Championship game.

Just three years prior, Greg Carvel and his staff were at the end of a season which resulted in a disappointing five wins, even by UMass’ non-prestigious standards.

The freshman class that followed that disappointing season shifted the direction of the program in a drastic fashion. And the center of bringing that talent to Amherst was the recruiting done by the Minutemen, especially recruiting coordinator and associate head coach Ben Barr.

“That class was a game changer for our program,” Carvel said. “Now those kids are juniors, I feel like they’ve been here for six years. How important they’ve been, they’ve all played big, big minutes.”

The two biggest members of that recruiting class are no longer with the program; Cale Makar and Mario Ferraro have moved on to the NHL. While the Minutemen return a large portion of that class and plenty of production, 63 points still need to be replaced in the UMass lineup.

For the Minutemen to turn a season like last year’s into perennial success and avoid a letdown, it begins and ends with recruiting. It may seem as though a team a few months removed from a National Championship game would recruit drastically different players than a five-win team would, but Barr hasn’t changed a thing.

“[Success] hasn’t really changed what we’re trying to do here,” Barr said. “It’s easier to have a conversation with someone about UMass hockey than maybe it was four or five years ago, but it doesn’t really change the type of person that we’re trying to get here. We go out and watch players that we think are good hockey players, and then it’s about gathering information about who they are as students and as people. We put a lot of time and effort into making sure that it’s the right fit, and just the right fit on the ice.”

Traditional powerhouses, utilizing traditional scouting evaluate players not only on their skill on the ice but also require the players to possess the ill-defined quality of ‘Division 1 size.’ By ignoring size and rather focusing on ability, the Minutemen have built relationships with undervalued prospects before the other programs can realize what they’re missing.

Zac Jones, the headlining prospect for this year’s recruiting class and a third-round draft pick of the New York Rangers, was at one point an undervalued prospect himself. While most teams seemed to ignore the talented defenseman for his lack of size, Barr was certain he’d found a star before the rest of the hockey world caught on.

“It’s one of those recruiting cases,” Carvel said, “where you’re first to get there,  and that often is a huge factor in being able to land a recruit.”

Bobby Trivigno is another instance of a player  supporting this claim. Standing at just 5-feet-8-inches tall, Trivigno struggled to garner the attention of recruiters despite putting up 60-point seasons at the storied prep program Shattuck Saint Mary’s.

“Yale and UMass were the only two teams to talk to me before my senior season,” Trivigno said. “They both liked me at the size I was.”

Having a team believe in Trivigno went a long way in convincing him that he wanted to be a Minuteman.  The thing that set UMass apart from programs like Yale, which also liked the forward despite his size, was Barr.

“I knew Ben Barr as a good recruiter and great coach, so I trusted him,” Trivigno said. “They loved me and after I visited, I knew I wanted to come here.”

“The huge year last year had a lot to do with [my decision],” freshman Cal Kiefiuk said, “but on my visit, talking with the coaches, Barr and coach Carvel, listening to what they believe in and the culture. It was all the things that go into the program, not just this guy’s x’s and o’s.”

Kiefiuk had been committed to play his college hockey at Michigan for close to three years when he re-opened his commitment this past winter. Decommitting from his hometown Wolverines to play in western Massachusetts for the upstart Minutemen isn’t something that the program could expect in the years before Carvel and Barr arrived. His recruiting process is emblematic of how Barr wants recruits to view UMass.

“The biggest thing [in making my decision] was the kind of kids they recruit,” Kiefiuk said. “I knew Chaffee from the past in juniors. I knew him as a person and how much success he’s had here and knowing the kind of kid he is. So, I thought if that’s what they believe in, then I think this would be a good fit for me.”

Kiefiuk is one of five Minutemen who hail from Michigan, three of whom are members of this year’s freshman class. The high number of Michigan-born players can be attributed to Barr’s time coaching at Western Michigan. Barr served as the Broncos’ associate head coach and recruiting coordinator from 2014 through 2016, making relationships that are still benefitting UMass right now.

“We actually have quite a few players from Michigan on our team now from my few years out there,” Barr said. “Just people I’ve met who followed us over here.”

After just one season of true national relevance, the potential for a disappointing follow-up campaign is very real. If the Minutemen are to avoid that and turn one great year into a consistently great program, Barr will have to continue to find the types of players that he has so far.

“I’m scared to death of any complacency in the program,” Carvel said, “but also excited that the challenge of maintaining the program from where we did without superstars in the lineup which we’re fully capable of.”

Carvel and Barr’s culture is the driving force to bringing players to UMass, and it isn’t something that’s lost on players once they get here.

“They’re building a tradition here,” Kiefiuk said, “and I wanted to be a part of something like that.”