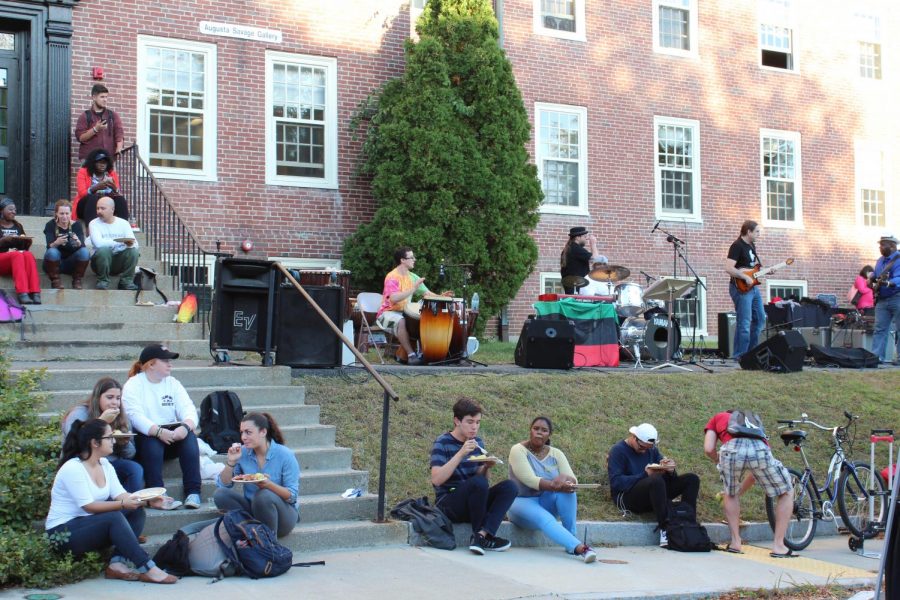 Poet Sonia Sanchez could’ve had a lonely existence in Amherst. Moving to Amherst in the early 1970s to become Amherst College’s first Black professor and eventually, the second chair of the college’s Black studies department, she spent her first night in town crying as she unpacked boxes, wiping her tears in time to wake her kids up. Driving into town in their little Volkswagen, Sanchez made a right onto Main Street. At the light was jazz musician Max Roach, looking like he “had just gotten out of GQ magazine.”

“I was stricken,” Sanchez recalled Thursday evening at an event honoring Roach, held in the New Africa House on the University of Massachusetts campus. Roach had the only face in town she could recognize. As she rolled down her window, he walked on over to her car.

“We heard you were coming,” Sanchez remembered Roach telling her. “I’ll take care of you.”

“And you know, he did,” she added, her voice cracking. “He truly understood what it meant for artists to come together and protect each other … Max Roach kept me alive in a place called Amherst.”

Roach was a world-renowned drummer, known as one of the fathers of bebop and modern jazz. In 1972, he made history again, this time as a professor in the UMass’ Afo-American studies department. According to Afro-Am professor John Bracey, Roach was one of the first musicians to be hired to teach at a university.

But among friends, family and colleagues, he was also known for his heart. Over 10 years after his passing, the Afro-Am department hosted a multi-day event in celebration of Roach. At the panel titled, “The Life and Legacy of Max Roach,” a slew of artists, including his daughter and violist Maxine Roach, his “biographist” Herb Boyd and visual artist Nelson Stevens, recollected.

Maxine remembered the special bond they shared over music, and the way he nurtured her “as a daughter and a musician.”

Like by advocating for her and other Black female artists.

In 1985, the elder Roach created the Uptown String Quartet, a music group made up of not one, but two, quartets: one female, one male. At the time, it wasn’t heard of. But he did it anyway.

“He really boosted us. ‘You’re not going to be background here, playing notes and stuff,’” she recalled her father saying. “You have to be upfront, drumming, creating as much as we could.”

Roach’s advocacy and activism went beyond the Uptown String Quartet. It was intertwined into all of his music, even the way he defined music.

“[To Roach] jazz was just a four-letter word,” Boyd said. Music, drumming in particular, was a part of the African diaspora’s history, and history of resistance.

At UMass, Roach helped found “Drum,” an award-winning literary magazine founded by and for Black students, John Bracey, a professor of Afro-American studies at UMass, said.

Roach joined UMass at the behest of Dr. Fred Tillis, retired music professor and director of the Fine Arts Center.

Through his work, Tillis turned Amherst into what Bracey called “kind of… a mecca for Black musicians.” Besides Roach, Tillis brought musicians from all over the African diaspora to UMass, such as Afro-Caribbean drummer Tito Puente and jazz trumpeter and bandleader Dizzy Gillespie.

And brought Maya Cunningham to campus.

Doctoral student Cunningham was 15 when she heard her first Max Roach record, and “I’ve been captivated ever since.” That first record opened her up to jazz vocalist Abbey Lincoln, who was also Roach’s wife. Together, they created “revolutionary music” — music that inspired Cunningham to become a vocalist and ethnomusicologist.

On Thursday night, she was able to honor Roach and Lincoln by performing some of their pieces, such as “Straight Ahead.”

Roach’s work “decolonizing jazz” at UMass left a mark on the Afro-Am department and continues to influence black academia on campus.

“The reason I’m here is because people like Max Roach were here before me,” Afro-American Studies department chair Dr. Stephanie Shonekan said.