The group also discussed a hate crime that happened on campus on Oct. 30. 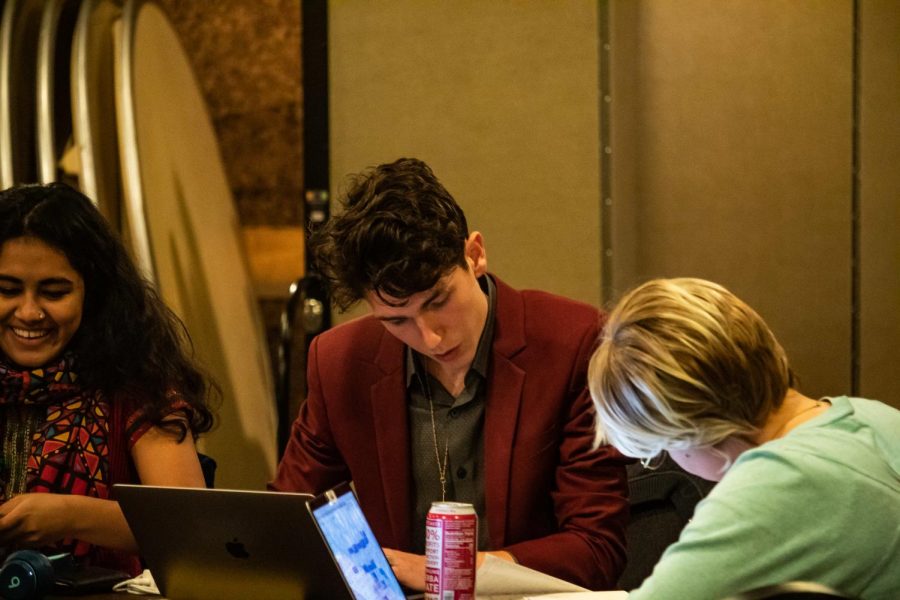 During their Wednesday night meeting, the Student Government Association of the University of Massachusetts announced an impeachment inquiry against President Timmy Sullivan. The meeting also discussed a recent hate crime on campus, as well as a recent cabinet termination.

The allegations against President Sullivan resulting in the inquiry relate to an alleged violation of the bylaws dealing with the SGA payroll in the 2018-2019 academic year.

Last year, both the former vice president and secretary of technology resigned. These resignations left President Sullivan responsible for finding candidates to fill their positions.

Sullivan was able to fill the position of vice president because he received an application from Hayden Latimer-Ireland, who was elected on Sullivan’s ticket in the spring.. However, Sullivan faced issues finding a new secretary of technology.

According to the bylaws, when there is a vacancy in a cabinet position, the president is responsible for overseeing the replacement of that position. Because Sullivan’s workload increased as a response to this situation, he compensated himself for another 10 weekly hours, after receiving approval from SGA advisor Lydia Washington, as he handled the duties of the vice  presidency along with his own.

“This is normal and procedural, in accordance with some other positions,” said Sullivan. “An example of this would be [the] secretary of registry increasing pay hours during the RSO approval process if their work dramatically increases as well.”

The event under investigation happened last year but was not questioned until now.

“[My] confusion about what had happened [and how I] was not approached with questions but instead a call for impeachment, I can only understand to mean that the ends of this inquiry are more important than the act of actually inquiring itself,” said Sullivan.

Administrative Affairs and the Rules and Ethics Subcommittee will be looking into this decision to determine if it is a violation of any bylaws.

“Rules and Ethics shall begin an information finding process to determine what happened, why it happened, and what the consequences were,” said AA Chair Althea Turley.

The subcommittee will then report this information back to the senate.

Earlier in the meeting, Secretary of Veteran Affairs Kyle Kendall announced that he had been given his two weeks’ notice. During his announcement, he retold several events that took place leading up to his termination.

“On Oct. 1, I received an email removing myself from an agency advisory board,” said Kendall, who served on the Veteran Affairs Advisory Board. “I spoke in person with President Sullivan to inquire as to why, and I was informed that the agency structure did not allow for an advisory board.”

Kendall disagreed with Sullivan’s claim that the agency structure wouldn’t allow for an advisory board, and later emailed him asking to reinstate the board, as he believed its absence would be a violation of the bylaws. Sullivan did not comply with Kendall’s request.

Kendall also sent two emails requesting records: one to the secretary of finance requesting payroll records, which he received, and another to the chief of staff requesting minutes of the SLSO advisory board, which has yet to be fulfilled.

According to Kendall, Sullivan then emailed him requesting that they meet for a performance review and also inquiring as to why he requested the records.

During Kendall’s performance review, Sullivan raised two concerns, each of which happened over a month ago, and had not previously been mentioned, Kendall recalled.

Following the performance review, Kendall asked Sullivan three more times about appointing agency advisory boards, to which he replied that he had already given his response, according to Kendall.

Kendall then filed a petition for a ruling with a judiciary.

Sullivan then asked Kendall twice to put him in contact with the students who had concerns related to records requests.

Kendall responded “This is well within my position to handle, and I will do so once the records requests have been received.”

Sullivan then presented Kendall with a verbal two weeks’ notice of his termination, and later with a written one.

Another pressing issue discussed during the meeting was the discovery of a hate crime on campus earlier that day. Senator Adam Lechowicz reported the crime that he discovered, which were five large swastikas painted on the outer wall of the Fine Arts Center.

“It is incredibly disheartening for me, knowing that this is now the second time in two semesters that I have personally reported a hate crime,” said Lechowicz.

Sullivan and Latimer-Ireland expressed their concerns about the incident.

“I’m absolutely disgusted by what he reported, and I’m even more disgusted by the presence of antisemitism on our campus,” said Sullivan.