Senior Maja Boric improves to 8-0 on the season 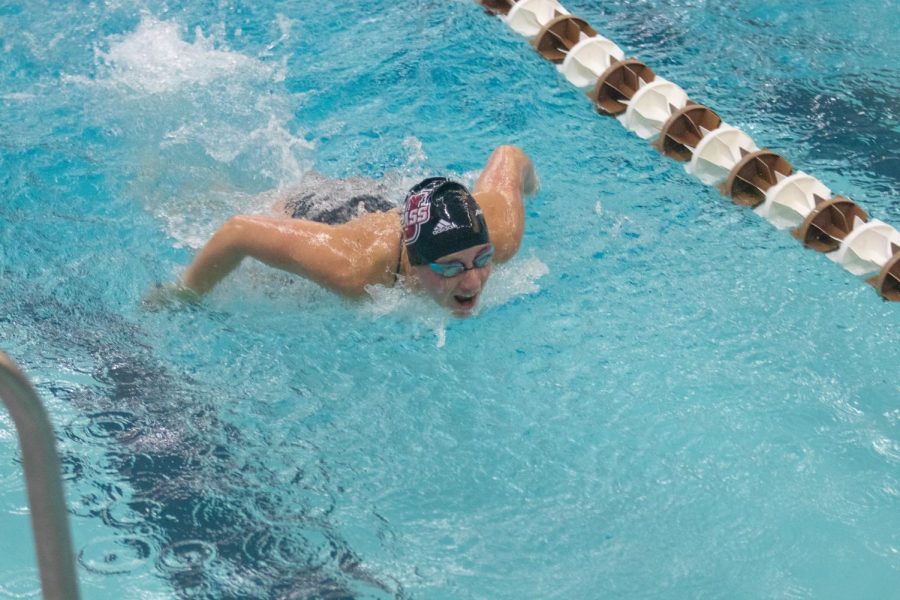 In its first home meet of the season, the Massachusetts women’s swim and dive team defeated Vermont by a score of 200-100 for its second straight win.

UMass (3-1) won 13 out of the total 16 events that were held, including a clean sweep in the 50-yard freestyle, the 200-yard breaststroke and the three-meter dive.

Senior Maja Boric stood out yet again in the win, taking home wins in both the one-meter dive and the three-meter dive for the fourth meet in a row, improving her overall season record to 8-0.

“She’s amazing,” coach Bob Newcomb said. “Very calm, very confident, knows what she’s doing. She and [diving coach Mandy Hixon] have a great rapport with each other. Maja is an absolutely beautiful diver on a consistent basis.”

Newcomb also credits Boric’s experience, saying, “This is a kid who’s been in NCAA’s twice, and knows that she belongs there.”

“She won the 100 fly, she was second in the 200 fly, she had a great relay split,” Newcomb said of Judge. “She’s just very confident with what she’s doing right now.”

Another racer who received praise was Mariam Labib, as she raced in the 200-yard freestyle and was behind the Catamount’s Sophia Smith for the first 175 yards, then finally took the lead on the last stretch when most thought the race was over.

“She swam that the way we wanted her to, it was race plan,” Newcomb said. “We were trying to get her to figure out how to do the first half of that race without burning her legs out, so we had her set back a little bit to save her legs, and then build her legs in and bring it home. I was very pleased with that swim.”

Two events later, Flagiello and freshman Olivia Mozoki came in first and second in the 100-yard breaststroke. Flagiello had a time of 1:08.36, while Mozoki had 1:08.48, both beating out Vermont freshman Jenny O’Neil, who posted a time of 1:08.91.

Shortly thereafter, the Minutewomen had their first clean sweep of the day, when Rudiman, Labib and sophomore Kelsey Cordery took the top three spots in the ­­­­­50-yard freestyle. Cordery only pulled out the sweep by a margin of .23 seconds, as Cordery had a time of 25.04 while Catamount Kira Parker finished in 25.27 seconds. Flagiello’s second win, in the 200-yard breaststroke, was the Minutewomen’s second sweep of the afternoon, as Mozoki placed second, followed by junior Sam Schieffelin.

Following the meet, the Minutewomen are coming up on a bye week.

“We’ve had three weekends in a row of meets, and we have next weekend off,” Newcomb said. “They are so excited, they deserve this weekend off. Right now they need to take care of themselves. Physical health, illness, academics, that’s gonna be a really important thing to get through this week.

“This is going to be a challenging week. We are going to push them, but by Friday at nine o’clock in the morning, they’re going to have the next two and a half days off.”

Joseph Aliberti can be reached via email at [email protected] or on Twitter via @JosephAliberti1.