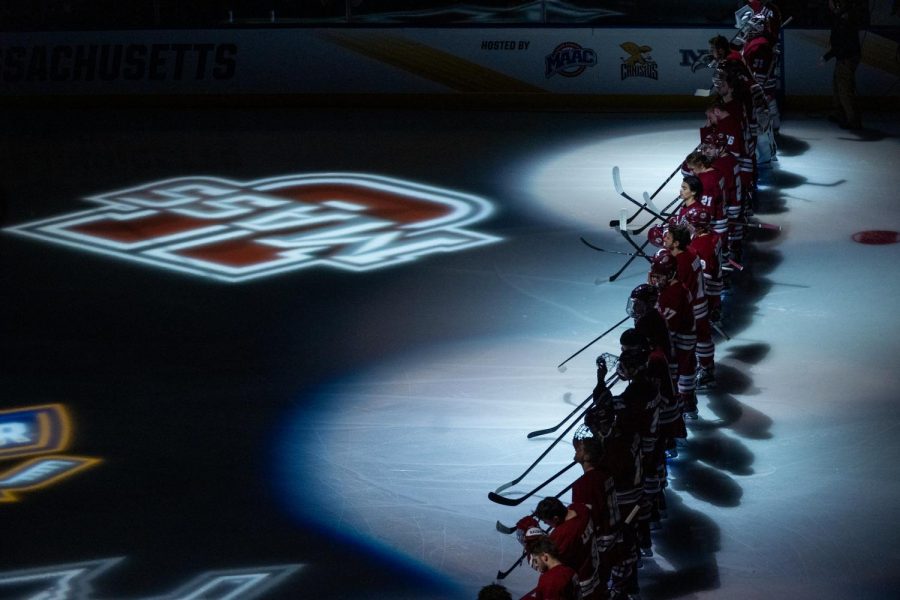 A new standard was set for the Massachusetts hockey team last year. That much is known. What’s yet to be determined is how the Minutemen will maintain that standard of success this season.

After taking Hockey East by storm, claiming its first ever regular-season championship before falling just short of the national title on 31 total wins, UMass enters the new campaign in a state of limbo.

After losing Cale Makar and Mario Ferraro to the NHL in the offseason, as well as the graduation of Jacob Pritchard and other key players like Brett Boeing, all eyes look to the Minutemen and coach Greg Carvel’s ‘NewMass’ mentality to see if the team can recreate the results of a magical run that stunned the world of college hockey last April.

Alongside the addition of a nine-player freshman class, UMass boasts 19 returners from last year’s squad that experienced unprecedented highs at its first-ever Frozen Four. On a young back end, Ty Farmer, Marc Del Gaizo and Colin Felix look to step up and fill the roles of their predecessors, while John Leonard and Mitchell Chaffee, among others, look to continue providing the big scoring punch.

With more depth than ever and a motivation to get back to finish the job, the Minutemen are set up for success ahead of Carvel’s fourth year at the helm.

They just can’t be complacent, a fact they all acknowledge entering the fresh slate of play.

“It’s a combination of I’ve never been as excited for a season but also as nervous for a season as I am for this one, because I’m scared to death of any complacency in the program,” Carvel said, “but also excited for the challenge of maintaining the program from what we did without superstars in the lineup, which we’re fully capable of. I think we’ll get more scoring deeper down our lineup, our defense will continue to be young. It’s usually a matter of which freshmen are going to catch up to speed and help us push forward.”

“It’s hard to do, but you’ve got to put last year in the past,” Mitchell Chaffee said. “We got a lot of new freshmen and they haven’t experienced what we did last year, so it’s a lot of the older guys putting [that] in the past. Taking what we need to learn out of last year and bringing it to this year.”

As successful as last season was, the returners know just how much they left on the table.

From the 3-0 shutouts to Boston College and Minnesota-Duluth in the Hockey East semis and the national title game, respectively, they come into the new season on a mission to make it back.

“We know last year we sort of sold ourselves short in ways,” Chaffee — who was crowned Hockey East Scoring Champion and the only other First Team All-American on UMass besides Makar last year —  said. “We know we’re going to kind of come in with a chip on our shoulders this year.” 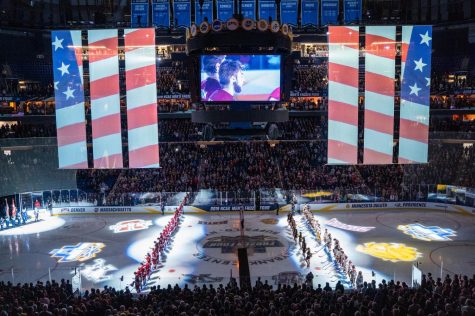 Bouncing back from the loss to Duluth was tough at first, but now they’re using it as motivation.

“I think we’re more motivated than ever,” Leonard said following a preseason practice last week. “It still hurts to think about what happened at the end, but at the same time that’s extreme motivation for every guy in that room. Not just the guys that were there last year, but even the freshmen, because that’s our expectation: to get back there.”

In the locker room and on the ice, those juniors who laid the foundation when they arrived as freshmen in 2017 will be crucial in continuing to push the program forward as it moves on from the Makar-Ferraro era that fast-forwarded the process of garnering respect in Hockey East, Carvel said.

“That class was a game changer for our program,” he said. “I feel like they’ve been here for six years. How important they’ve been, they’ve all played big, big minutes. I mean Chau, Chaffee and Gaudet have been our first line for three years and they look great on the ice. Then our second line’s got Lagunov and Leonard, so that class continues to be extremely important to our success, and I imagine that that whole class, every member of that class, will continue to be really important to our success.”

As for the freshmen coming in, who spent six weeks training this summer with veterans like Leonard, Bobby Trivigno and returning co-captain Niko Hildebrand, it’s about to get very real, very fast. Along with the highly touted Zac Jones, Matt Kessel and Gianfranco Cassaro join the Minuteman defensive end, while Cal Kiefiuk, Reed Lebster, Jeremy Davidson, Peyton Reeves and Eric Faith bolster the veteran crop of forwards up front.

“When we recruited a lot of those kids we were a last-place team, and I’m sure from the outside they’ve sat there for the last year thinking, ‘oh boy I better be ready,’” Carvel said. “They’ve got a great attitude but at the same time there’s always a learning curve. A lot of growing pains for that group, but that’s good for you. It’s good to be uncomfortable. That’s when you grow and get better. I like their attitude, they’re good kids, they’re committed, but they’ve got a lot to learn.”

In net, the Minutemen boast strong options for the starting spot in Matt Murray and Filip Lindberg, as well as the newcomer, freshman netminder Alex Camarre. Murray anchored the team for a majority of the regular season last year, with a 15-1 start, posting a 20-5-0 record with a .919 save percentage at the end of the season and setting a program record for single-season goaltender wins.

Lindberg missed a small portion of the second half but played an increasingly dominant role when he returned. After Murray was pulled in Game 1 of the Hockey East tournament quarterfinals, Lindberg took over and never left the net. In 17 games on the season, he accumulated a save percentage of .934, third best in the nation. His playoff peak came with 37 saves in UMass’ overtime victory over Denver in Buffalo.

UMass opens its regular season on Friday with the same opponent as last season, Rensselaer. After that, it jumps right into the thick of things with a Hockey East showdown against the defending champion, No. 15 Northeastern, on the road.

With a mixed slate of non-conference and Hockey East matchups throughout the first half of the season, before all-Hockey East play commences in early January, the Minutemen face several top-20 teams as the season progresses, starting with a two-game set against the Huskies on Nov. 1-2, as well as No. 20 Boston University on Nov. 15-16.

A two-game set with No. 9 Quinnipiac kicks off Nov. 29, in a rematch of last December’s top-10 showdown, before UMass travels to Denver for two against the second-ranked Pioneers in another rematch of last year’s OT Frozen Four win. They won’t see No. 10 Boston College or No. 6 Providence until later in the second half, but either way, Carvel and his guys aren’t looking past the first game, and that’s how it’ll be all season long.

“You’ve got to take it week-by-week, but you still want that end goal in the back of your mind,” Leonard said. “That’s what we talk about, we want to get there, but we can’t just think about that. We’ve got to do the little things right week-by-week, and worry about Friday, then worry about Saturday — if we do those things the right way, we’ll worry about all that at the end of the year.”

“We know what our standard is,” Carvel said. “And we better play to it.”