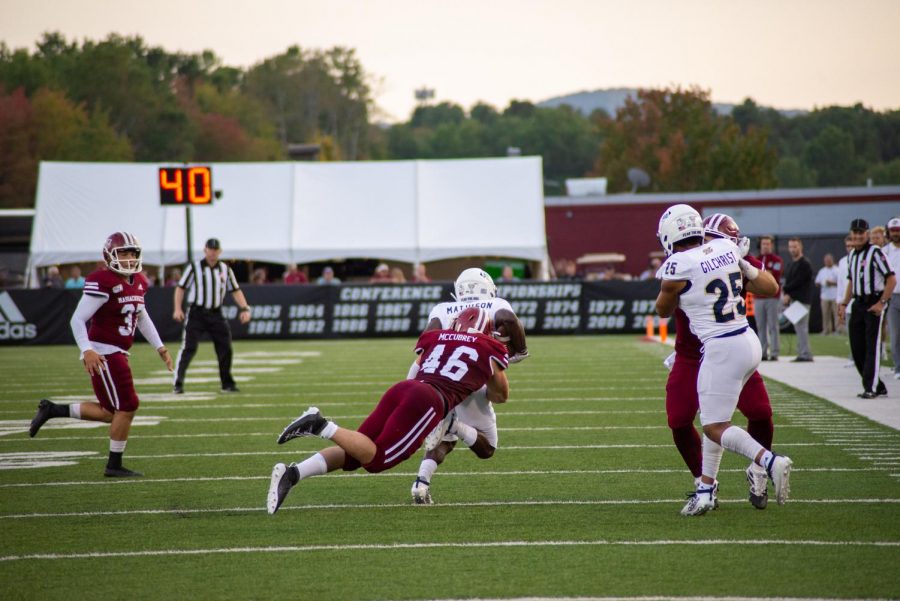 The No. 6 Wisconsin Badgers (6-1, 3-1 Big Ten) were upset 24-23 on Saturday by unranked Illinois (3-4, 1-3 Big 10). Junior James McCourt nailed a 39-yard field goal with four seconds left to beat the Badgers. Turnovers on back to back Wisconsin drives set up the Illini’s comeback. With the loss, the Badgers dropped to No. 13 in the national rankings.

At the start of the fourth quarter, the Badgers went down and scored a field goal to put them up 23-14 with nine minutes left. After the Illini were forced to punt on their next possession, they gained new life after forcing Heisman candidate, running back Jonathan Taylor to fumble. Illinois answered back with a 48-yard touchdown pass to wide receiver Josh Imatorbhebhe, putting them within two points.

Wisconsin committed another blunder on their next drive as Jack Coan threw an interception, only his second on the year, to put the Illini at their own 47. Illinois drove down the field and made sure to wind down the clock, giving them the one-point victory.

Illini quarterback Brandon Peters only completed nine passes on the day, but the Illinois defense forced the Badgers to turn the ball over three times, setting up their offense in favorable field position.

Wisconsin looks to bounce back after the upset as they duke it out in a Big Ten conference matchup against No. 3 Ohio State at Columbus. Illinois looks to ride the momentum of their first conference win as they go on the road to play another one against Purdue.

No. 12 Oregon overcomes 3rd quarter deficit to defeat No. 25 Washington

Oregon Ducks quarterback Justin Herbert outdueled Washington (5-3, 2-3 Pac 12) quarterback Jacob Eason in a 35-31 Ducks victory. The Huskies had a 10-point lead late into the third, but Herbert’s heroics at the end of the third and fourth quarter pushed Oregon (6-1, 4-0 Pac 12) to their fourth conference win.

With 3:39 left in the third, Herbert drove down the field and connected with Freshman Mycah Pittman on the 36-yard touchdown pass to cut the Washington lead, 31-28. After both teams had some defensive stands, Herbert cashed it in the redzone completing a five-yard touchdown to receiver Jaylon Redd, putting the Ducks up 35-31.

Eason was set up on his own 25 with 5:10 left, needing a touchdown to win. Eason’s heroics were cut short after defensive tackle Popo Aumavae sacked him for a 12-yard loss, followed by a false start penalty backing them up to third and 23. Eason gave his Huskies a chance, completing a 20 yard pass, but was ultimately stopped on fourth and three.

Oregon will host Washington State next Saturday and Washington is on a bye week.

Oklahoma’s offensive explosion started in the first quarter when Hurts threw touchdown passes on back to back scoring drives, quickly putting them up 14-0. The Mountaineers did answer back in the second quarter as quarterback Austin Kendall connected on a 38 yard touchdown. Oklahoma added two more touchdowns in the second, but West Virginia closed the quarter with a Kendall touchdown pass, cutting the lead to 28-14 at the half.

It was all Sooners in the third, as they outscored the Mountaineers 21-0, one score being on a blocked punt recovered in the endzone to put them up 48-14 midway through the third quarter.

Hurts is continuing to put himself on the top of the Heisman race as he finishes with 16/17 for 316 yards and three touchdowns. He also added 10 rushes for 75 yards and two more touchdowns. Hurts will continue his story book season when the Sooners travel to face Kansas State. West Virginia looks to get their offense on track when they travel to Texas to play Baylor on Halloween.