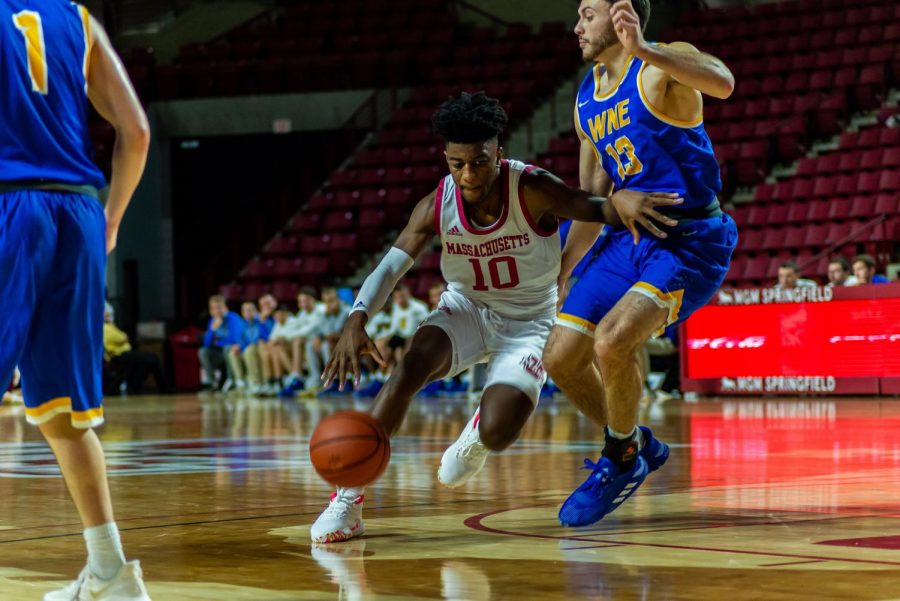 While Western New England isn’t exactly the highest caliber of competition against which to judge a team, Tuesday’s exhibition was our first chance to see the new-look Massachusetts men’s basketball team in action, and after an 83-47 blowout win, there’s plenty to parse through.

Important caveat: it’s Oct. 29, and none of these observations are remotely definitive; just some notes and observations from a Tuesday night that was occasionally sloppy but showed some promise.

Considering all the hype surrounding Tre Mitchell coming into the season, I think we all expected him to very casually put up 20 and 12 in this exhibition. That didn’t happen, and I think you could look at the final line — 13 points, one rebound, 4-of-9 from the field — and not be super impressed. But it’s one exhibition, and his talent is so obvious.

Mitchell’s clearly got more polish down low than most 19-year-old big men. He stepped out and hit back-to-back threes early in the first half, and he showed some real versatility switching out on guards, which is a slight contrast to what UMass had down low with Rashaan Holloway last season.

The rebounding number’s a bit surprising, but WNE was chucking threes early and there were a lot of long rebounds that just didn’t head his way. His passing was really impressive all night, another new dimension for the Minutemen down low.

All in all, Mitchell was solid. I get the feeling he’s poised for something special.

I made a whole video about Weeks back in September, the conclusion of which was that Weeks’ ceiling was something like Carl Pierre 2.0, something similar to what we saw out of Pierre during his freshman season two years ago. We saw flashes of that on Tuesday, when weeks went 4-of-6 from three and finished with 18 points to go along with some solid defense.

Third triple of the night for T.J. #Flagship pic.twitter.com/cREFGUJEYA

Freshman Carl Pierre is a high bar to match — Pierre was one of the best 3-point shooters in the country in 2017-18, shooting an Atlantic 10-leading 47.2 percent from deep, but he seems like he could fill a similar role: a knockdown shooter when teams key in on other guys, with a little defense to boot.

3. Samba Diallo and Sy Chatman could be ready for a jump

I think all the focus on the freshmen (plus Carl Pierre) left the sophomores under the radar a bit: while the young guns get adjusted, Diallo and Chatman are going to play a lot of minutes, and they both look better than they did when we last saw them.

I’m trying to be really careful about not putting a ton of stock into an exhibition against D-III WNE, so Chatman’s 13 points and nine rebounds in 11 minutes are impressive, but nothing to overreact to. But I do like what I saw out of him. He’s clearly much bigger than he was a few months ago, and looked much more comfortable than he did as a freshman, but I think finding the right role for him could still be a little tricky.

Diallo remains a bit of a wild card — his length and athleticism alone make him tough to deal with, and for a guy that’s only been playing competitive basketball for five or six years, he’s starting to become much more polished. There were times where he dominated WNE, pouring in eight straight points, on his length alone — I’m curious to see what that looks like against better competition. But his game continues to grow, and he genuinely may have a higher ceiling than anyone on this team not named Tre Mitchell.
Back-to-back buckets for Samba! #Flagship pic.twitter.com/T1wZDErWd2

4. The press needs a lot of work

You could see the concept working at times, particularly when Diallo was out there looking to trap, but the Golden Bears broke the press time after time, with the Minutemen missing one assignment here or rotating a split second too late there over and over.

There were positives on defense — it’s a longer, more versatile, more switchable UMass team, and the versatility of the big men alone relative to last season is a big jump. But if the Minutemen are as committed to the press as McCall says, it’s going to need some work.

Last season, McCall lamented the team’s lack of a “true” point guard on a couple of occasions, and he rolled out a starting lineup without one on Tuesday, with Keon Clergeot serving as the nominal point guard. I don’t think he’ll stick there for long, because it’s not really his best position.

The leading contenders are Sean East and Kolton Mitchell, and I think East was particularly impressive on Tuesday. He’s clearly very comfortable in that role, and while his stats don’t jump off the page — six points on 3-of-4 from the field, four assists and no turnovers — I thought he really brought a different energy to the position when he was on the floor. He can push the ball in transition, he’s got great court vision on the break, and I think he’s going to really put up a fight for that spot.

K. Mitchell had a couple nice moments, and he’s probably a better option on defense. He looked really sharp on that end and is a really high-effort player, and that can go a long way.

I still think McCall will very likely give Clergeot the start against UMass Lowell next week, but I liked what I saw out of both East and K. Mitchell, and they’ll have their say before long.

6. At the very least, this team should be fun

This is all I’m saying: I have no idea if this team is going to be good. Leaning on seven freshmen, one of whom is a lock to start and a couple more of whom could play very significant minutes in the rotation, is always tough. This team is really young, and has a lot to learn. But I really think they’re going to be fun.

It’s all just so much happier than it was a year ago — they seem to be having a blast, the energy on the bench is so different, and it’s a team of guys who play really hard.

I think the trouble with last year’s team was more the way they lost than how often they lost. The 2017-18 team, with C.J. Anderson and Malik Hines and Rayshawn Miller only won five games in conference play, but they seemed popular enough with the fan base, because they cared and they played hard. This team feels more like the Minutemen of two years ago than last year’s squad.

In all truth, who knows? If they play poorly, it’ll be much harder for all that positivity to last. But on Tuesday night, the Minutemen were fun, they had fun, and it was fun to watch.