UMass basketball’s seven freshmen settling in ahead of tip-off 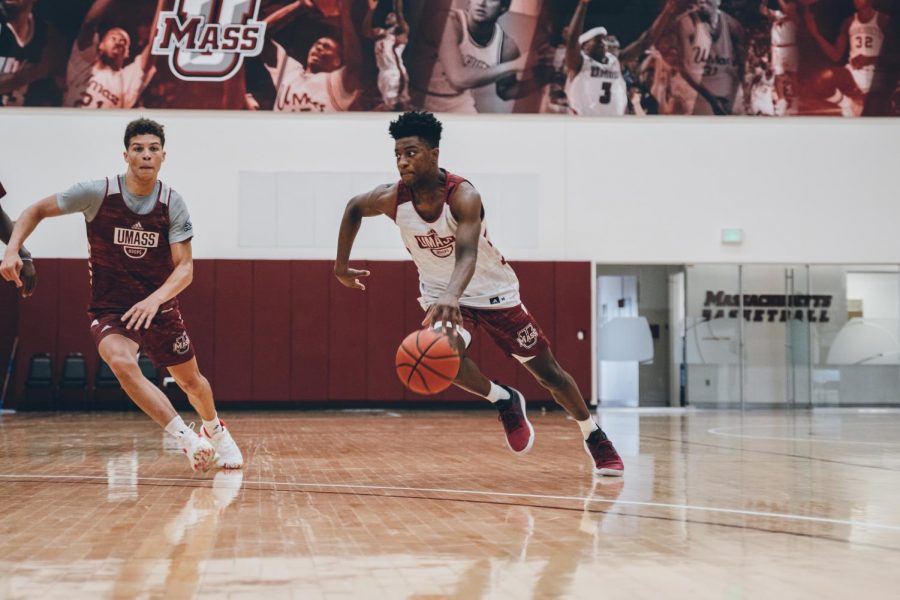 With a big group of freshmen expected to play significant minutes this season, it’s tough to project forward for the Massachusetts men’s basketball team — but early indications suggest they’re fitting in just fine.

Matt McCall’s got seven newcomers this year, by far his biggest freshman class in his third year at the helm, and he’s been pleased with the early results.

“I leave practice every day, and sometimes you bang your head against the wall just about the execution piece, but you’ve got to keep in mind you’ve got seven freshmen, but they’re giving us everything they have and that’s all we can ask for right now,” McCall said Monday. “We’ll continue to coach them and get them better at executing and things like that, but it’s a great group. I can honestly say I love going to practice every day because these guys are giving us everything they have.”

The class is headlined by Tre Mitchell, a top 100 recruit according to Rivals and ESPN, a talented big man expected to handle a majority of the minutes down low. One of three Woodstock Academy products debuting in Amherst this winter — potentially four, as transfer Dibaji Walker’s eligibility waiver is still pending — Mitchell has been the subject of plenty preseason hype, including some A-10 Freshman of the Year buzz.

“The one thing about Tre is that he’s just such a great kid,” McCall said. “All the preseason accolades, he’s not wrapped up in any of that. He wants to be a part of this team and impact this team in any possible way he can, and that’s what he’s focused on: the opportunity to change this place. But it’s not all on him, and we don’t want him feeling like that just because of his ranking coming out of high school, he wants to fit in. He’s an even better kid than he is a player, and he’s been terrific.”

“There’s just so many different things that you can do with him on the floor offensively, because of his ability to shoot. One of his best attributes is his ability to pass, and he can really score with his back to the basket. He’s been terrific.”

“I’ve been really, really pleased with TJ Weeks,” McCall said. “Not just his ability to shoot — he’s a sniper from behind the 3-point line, lefty, beautiful stroke — but just his ability to be coached, want to be coached, you tell TJ to do something one time and he does it. It’s not like you have to repeat yourself, he picks things up right away. I’ve been really, really pleased with him and his development. TJ’s been terrific through this fall camp.”

One of McCall’s major struggles last season was structuring an offense without a true point guard — Luwane Pipkins and Keon Clergeot were really combo guards who slid to point because of need, while Tre Wood missed parts of the season with injury and never quite found a consistent stride at UMass. Pipkins and Wood are gone, and while Clergeot will likely get the nod on opening night, freshmen Kolton Mitchell and Sean East are making their cases.

“Both Kolton and Sean have done really good things at times,” McCall said. “Kolton, especially on the defensive end of the floor, he’s such a good loose-ball guy, getting his nose in there, he can really move his feet defensively and change the game.

“Sean has a gift for having feel, and even in our scrimmage got a lot of things into the game just with his feel for the game. They’ve both done some positive things, and we’ve got to see over these next 13 days how that plays out, and who’s going to play a lot of the minutes there.”

John Buggs, CJ Jackson and Preston Santos round out the class, and while the three have had some minor injury troubles, are expected to be all set for opening night.

The group seems to have already developed a nice rapport — as Mitchell fielded questions after practice on Monday, Jackson and Weeks stood behind the media with practice jerseys or water bottles serving as makeshift microphones, asking questions and poking fun, while Mitchell and Jackson did the same when it was Weeks’ turn in the spotlight. Save for some arguments about who among them is the finest NBA 2K player — they each fancy themselves as the best gamer on the team — it’s all been positive.

“I’ve enjoyed everything so far,” Mitchell said. “We continue to grow every day as a team in different aspects of the game. Still learning, obviously we’re very young, but we come to compete every day.

“Things have been going really well,” Jackson added. “I feel like we’re gelling as a team, we’re around each other all the time, and we’re just learning each other. Having seven freshmen can be challenging, because there’s a lot of new faces, but I think us seven freshmen — and the upperclassmen — are really getting along.

“We all basically spend all day together, we’re with each other all the time — I feel like we just have a great connection overall.”

Junior Carl Pierre, who’s become the most vocal leader on the team, says they’re ahead of schedule.

“They’re doing pretty well,” he said. “They’re growing up pretty fast, they’re moving a lot faster than I was my freshman year.”

It’s difficult to put a ton of stock into any preseason talk — it’s easy to get along before adversity hits — but McCall’s tone, at the very least, is a far cry from what it was as a UMass team riddled with chemistry issues struggled to a 4-14 A-10 record last season.

Asked if he felt better than he did at this time a year ago, McCall chuckled.

Amin Touri can be reached [email protected], and followed on Twitter @Amin_Touri.