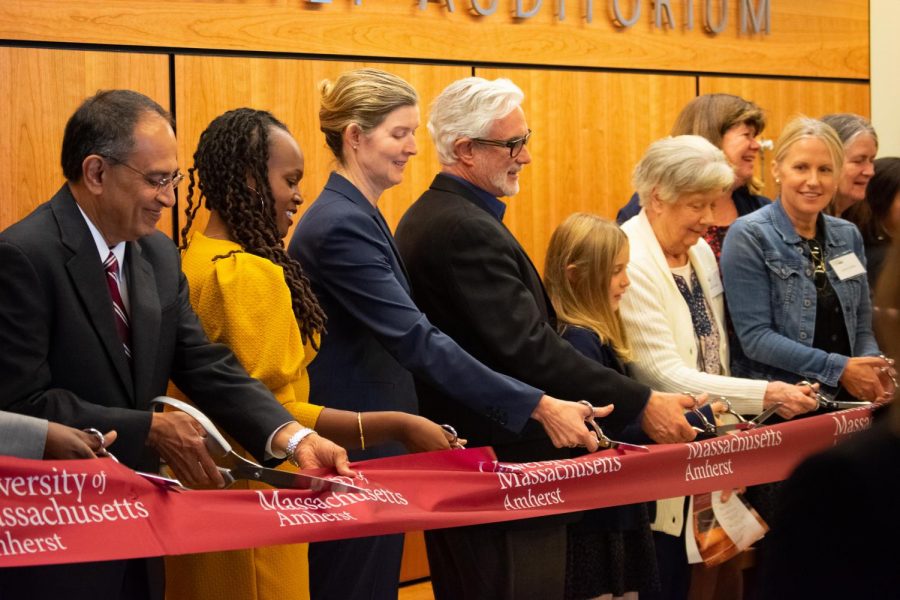 The University of Massachusetts College of Education unveiled its Carney Family Auditorium during a ceremonial ribbon cutting on Friday.

The new auditorium features a 203-seat lecture hall with a “new state-of-the-art audio visual system,” according to a media advisory on the ceremony, where the College will be able to host classes and speakers. The stage of the auditorium was lowered and the space provides options for student and community use.

In addition, the technology in the new space will allow students to use their devices to share their work with the class and to “facilitate group work in real time,” according to Charles Desmond, the CEO of Inversant, a company that helps low-income families gain the resources necessary to pursue goals in higher education.

“This new, exquisite, beautiful space will enable the College to welcome students and faculty across the campus, community members as well as scholarly innovators and entrepreneurs from around the world who can be here to discuss critical issues in education,” Desmond said during the opening remarks of the ceremony, held inside the new auditorium.

The renovations cost a total of $2.5 million. While a majority of the cost was paid for by the University, a lead gift from Paul Carney, an alum of the Isenberg School of Management Class of 1982 and a member of the UMass Amherst Foundation, helped cover a portion of the renovations, Carney said. This gift, along with some state funding acquired through connections Carney had, was meant to serve as a catalyst to help kickstart the project.

While Furcolo Hall, the home of the College and the site of the auditorium, finished its last renovations in 2016, the auditorium was not part of those renovations due to a lack of funding, Chancellor Kumble Subbaswamy said at the event.

Built in 1962, the old space, which was previously closed off, was “dank, filled with asbestos and collecting dust,” and people would walk by the space and be “filled with sadness,” according to Cynthia Gerstl-Pepin, the dean of the College.

However, during a tour of the College with his mother, Grace Norton Carney, a Massachusetts elementary school teacher, Carney saw the old auditorium and decided he would fund its renovation to honor his mother.

Carney said during the ceremony, “My motivation and inspiration to be a catalyst for financial support in this project, it was a tremendous, selfish—that’s right, selfish—desire to perpetually express my appreciation to my family, for their roles in the field of education, and the example they have set prioritizing the importance and significance education plays in our society.

“In addition, my efforts are also in appreciation and recognition for all the dedicated educators and administrators who have sacrificed for me and all children and learners.”

To Subbaswamy, Carney’s support to the campus “transcends his Isenberg affiliation” and Carney “understands [the University’s] continued success requires a breadth and depth of excellence throughout campus.”

Alicia Gonzales, a doctoral candidate in teacher education and curriculum studies, also spoke at the event to provide a “student perspective” on the new space. Gonzales discussed how the College provides a place of belonging for its students and thanked the Carney family for their support.

The speeches were concluded by Jamila Lyiscott, an assistant professor at UMass, who told the story of a mural she saw at an orphanage during a visit to Haiti six years ago. The mural featured a “white man in a suit and tie sailing toward a small island where black naked children were jumping and smiling as they awaited his arrival.” To Lyiscott, the mural represented the narrative of “black need met with white benevolence,” and urged the audience to think about how the new auditorium will be used.

“So as we uphold this moment, I must implore us to ask ourselves, will this work echo the violent history of grand larceny embedded in the stolen land we are standing on at this very moment?” Lyiscott asked. “Will we paint a mural of displacement, marginalization, paternalization, inferiority? How exactly does one build possibility on a history of pain?”

Sonya Atalay, an associate professor of the department of anthropology, also spoke to acknowledge the land beneath the auditorium, which was once Native American land.

The unveiling concluded with the ribbon cutting, which occurred outside the auditorium with the speakers, while the audience remained inside. A reception followed the ceremony.

The event was a part of the University’s Homecoming Weekend, which celebrates student, faculty, staff and alumni.

Editor’s Note: A previous version of this article stated the $2.5 million renovation was funded by Carney.