Communication remains a large focus for UMass’s back line 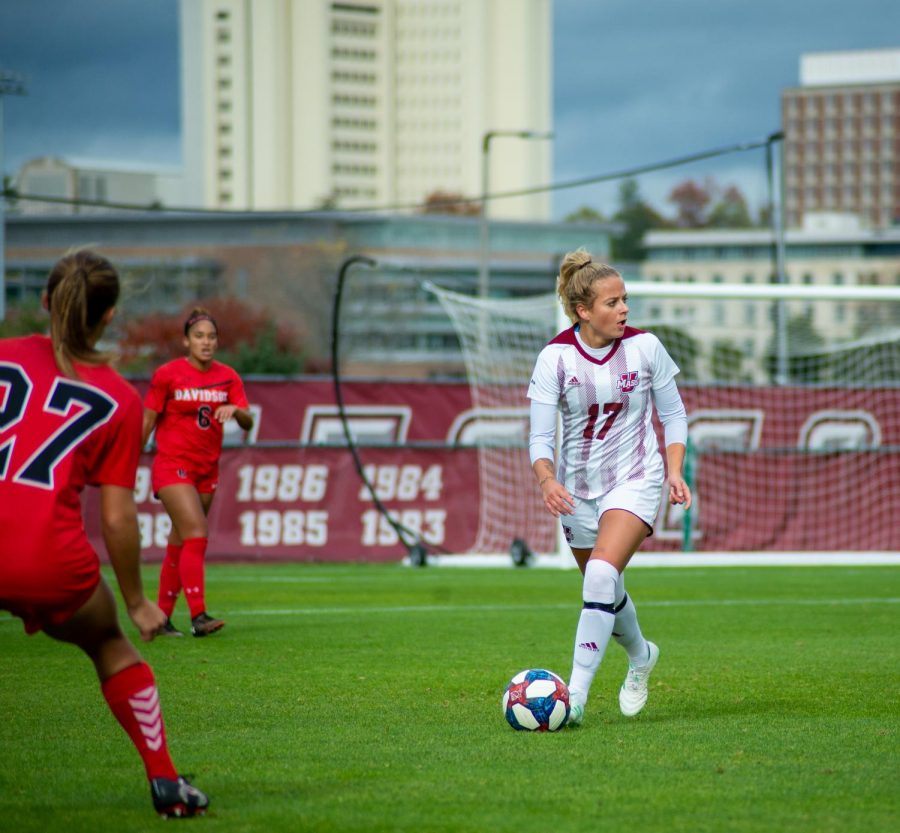 With two games left in the regular season in Atlantic 10 women’s soccer, teams are starting to see their place in the playoff picture. University of Massachusetts currently stands in third place, meaning they will be granted a home matchup as long as they continue their win streak against La Salle on Thursday. Despite clinching playoff berth, both teams are at risk of falling anywhere between third and eighth place, making every game crucial.

Defense has played an important role for UMass in its last four games, where they only conceded three goals, earning 10 points off three wins and a tie. As of late, sophomore Ava Jouvenel has fallen into her defensive role. The French sophomore has played in almost every minute in the back half of the season.

“When I transferred, I didn’t play regularly too much since March,” Jouvenel said. “So, coming in, it’s been rough, but we’ve been working on fitness and holding on for all 90 minutes. We’re doing good mostly because we get along so well.”

Since the beginning of the season, head coach Jason Dowiak has made sure the defense was comfortable passing along the back line and passing to Ryan if needed. After hiccups in their opening few games, the Minutewomen have started to pass the ball a lot better, giving them the lead in possession time in most of their games.

“A lot of it is more about the movement of the players, of the ball and their movement has gotten a lot better,” Dowiak said. “Against Duquesne, who was really organized defensively against us, our midfield and forwards found better pockets to get on the ball and the timing of which to get there.”

La Salle enters the game with momentum after back-to-back victories against Davidson and George Mason. Despite low scoring fixtures, the Explorers pose the biggest threat off set pieces, having a large arsenal of attacking plays. Dowiak has focused heavily during practice this week in preparation for the variety of La Salle’s scoring.

“We practiced for our goalkeepers a lot of services in traffic,” Dowiak said. “We have been looking at a lot of their game films and they’re a bit unpredictable. They change things quite frequently on their set pieces seeing that’s what they’re known for.”

Ryan has kept UMass in the game on many occasions in their four-game unbeaten streak, contributing with a handful of saves in each. Distribution out of the back has been an important area for Dowiak at practice not only for developing Ryan’s skill on the ball, but for the team’s psychological benefit as well.

“It adds so much composure and confidence to the players in front of her,” Dowiak said. “The back line has that release valve at all times through Peyton’s passing. We have a goalkeeper that can calm things down that way and also make big time saves when the moment does come up.”

The Minutewomen will try to keep former National Player of the Week Melissa Kössler going strong in hopes of providing UMass with more late goals and game winners if needed, as has been the case much of this season.

The two teams will go head-to-head Thursday when they meet at Rudd Field in Amherst. The game is set to start at 3 p.m.