A-10 standings are on the line this weekend 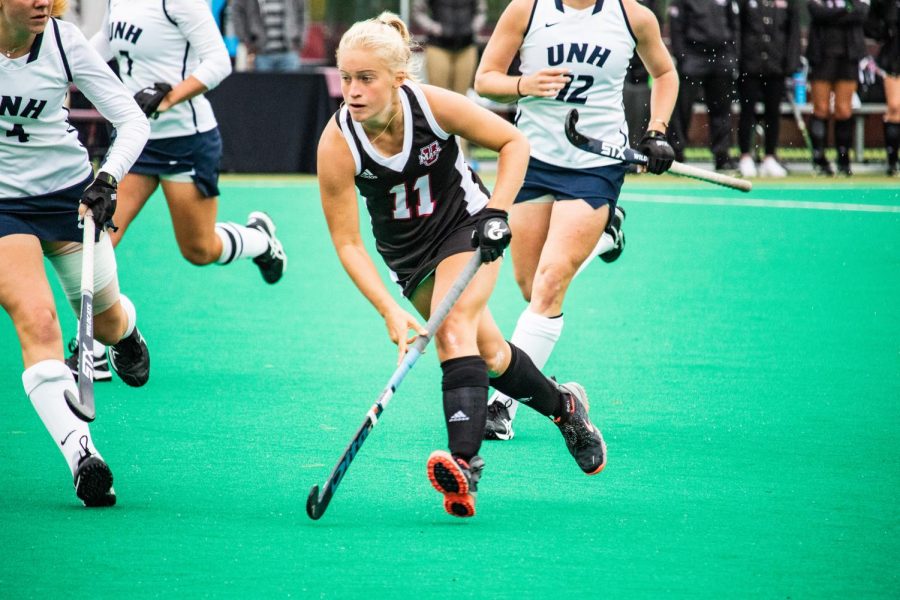 It is safe to say this weekend is the most important of the Massachusetts field hockey team’s season, as the Minutewomen (5-7, 2-2 Atlantic 10) travel to Pennsylvania to play two of their four remaining conference games against Lock Haven (7-6, 4-1 A-10) and Saint Francis (3-10, 1-3 A-10).

UMass currently sits in sixth place in the conference standings. Only the top four teams qualify for the Atlantic 10 Championships. The Minutewomen have participated in every championship since 2006.

Lock Haven is currently in second place, but a UMass win on Friday would even the schools in the loss column and give the Minutewomen the head-to-head tie breaker. A loss would put a full two games between the schools and would mean UMass could finish no higher than third as the Bald Eagles have only two A-10 contests remaining after Friday and would own the tie-breaker over the Minutewomen.

Despite the high stakes, UMass is trying not to get ahead of itself.

“We are trying to keep it as business as usual,” Weinberg said. “We tried to make really intense practices plans with specific focuses for this weekend but not necessarily verbalizing to the team. They will train hard this week and they’ll get the message through our training environment about just how intense it is going to be.”

Winning Friday’s game would make the task of qualifying for postseason play that much easier for the Minutewomen. A loss combined with a La Salle win over Richmond and UMass no longer controls its own destiny, and it would need help from other teams in the conference to make the tournament.

Losing both Friday’s and Sunday’s matchups would make that challenge nearly impossible. The Minutewomen would need nearly everything to fall their way as they would fall to seventh place with four teams ahead of them holding the tiebreaker.

Two wins and UMass can feel secure about a 14th straight championship appearance.

On top of the challenge of playing in games where the stakes are so high in the standings, the two weekend matchups will be played on different playing surfaces. Lock Haven plays on the typical Astro Turf like most of the teams in the nation, while Saint Francis plays on turf that’s mostly used for football.

This presents yet another difficult task for UMass on a weekend that certainly won’t be easy.

“We need to adapt to adversity,” Weinberg said. “I think that’s going to be our biggest challenge, being able to play solidly on the Astro Turf on Friday and being able to readjust on Sunday to their style of play.”

Saint Francis is one of the few teams in the nation that still plays on that surface. Balls typically move slower and are more likely to take unexpected bounces. This is known to give Saint Francis a bit of a homefield advantage. The Minutewomen were upset the last time they played there back in 2017. The Red Flash failed to qualify for the A-10 tournament, while UMass only lost one other conference game.

UMass looks to avoid suffering the same fate as the 2017 team, as doing so may cost them their season.

Tim Sorota can be reached at [email protected] and on Twitter @TimSorota.