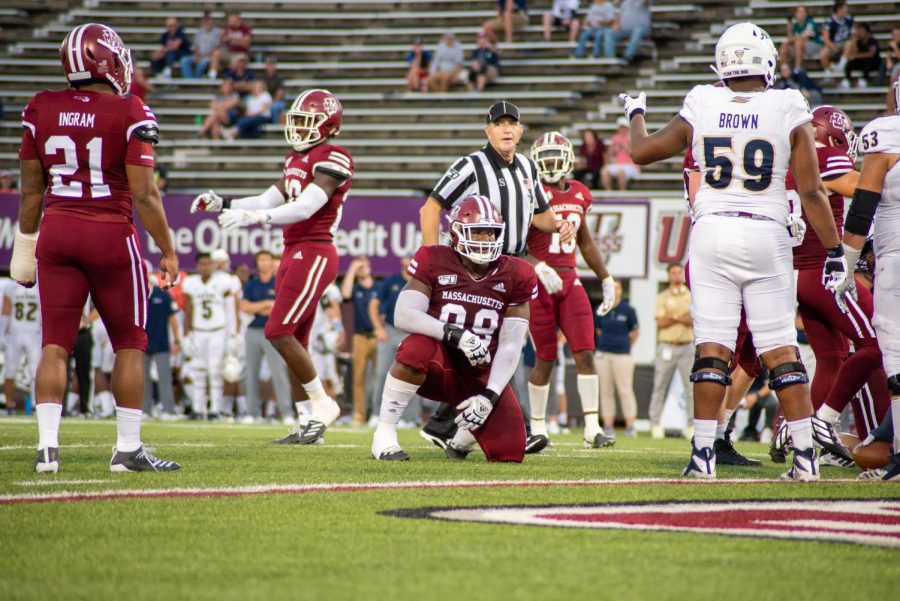 A disappointing campaign for the Massachusetts football team somehow took another turn for the worse on Saturday.

Squandering whatever momentum it might have gained from its win over Akron, UMass (1-5) suffered its first shutout of the season in a 44-0 defeat at the hands of Florida International (2-3). The Minutemen managed just 115 total yards of offense and only got into FIU territory once, after a tipped punt gave them starting possession at their own 48.

“That was as poor an offense performance as I may have been around,” coach Walt Bell said. “We did pitch-and-catch, didn’t win very many of our one-on-ones, and there’s just way too much on very routine things, things that I would have thought going into gameday we would have had success with.”

Right off the bat, the UMass offense made costly mistakes. With the Minutemen facing a short fourth down near midfield, quarterback Michael Curtis kept the ball on an option that was immediately snuffed out, and FIU’s Olin Cushion ripped the ball out of Curtis’ hands. The turnover set up the Panthers’ offense in UMass territory and led to the first points of the game shortly thereafter.

“We need to be aggressive to steal a possession, and more than anything else, if we execute and we hand the ball off, we’re going to have a first down,” Bell said. “But again, that’s our job as coaches to make sure our kids do execute at a high level. We can’t leave things like that to chance.”

Coming off his electrifying start against Akron, Curtis struggled mightily. Bell worked in a number of designed runs early to take advantage of Curtis’ athleticism and help soften up the FIU defense, but they were by and large unsuccessful. The redshirt senior was off on his throws most of the night as well, including a pass behind Kyle Horn that was tipped and intercepted.

By the time he was removed for season-opening starter Randall West, Curtis had completed just five passes on 19 attempts, resulting in 66 yards and two interceptions.

“[Curtis] fought his ass off,” Bell said. “He did everything he could to help the ball club. Are there some decisions he’d love to have back? Absolutely. But everyone’s got to be better, it’s not a one-man show. The quarterback’s not going to stop other people from tackling and doing the other things that are required for a team victory.”

West came in midway through the third quarter and proved equally ineffective in moving the UMass offense, which finished the night 1-for-13 on third downs. That one third-down conversion came on the first set of downs on the night.

On the other side of the ball, the defense once again put up a disappointing performance. FIU rolled to 541 total yards, 278 on the ground, and 26 first downs. Trailing by 34 at halftime, the Minutemen improved slightly in the second half, forcing the Panthers’ only punts and allowing just 10 points.

“We’re trying to bring pressures, trying to create movement, trying to do everything you can to stop the run,” Bell said. “Really went back to base [in the second half] and just technique, effort, fundamentals. That’s what it’s going to come down to, especially with a really young group, and I thought they did a better job in the second half.”

When FIU got the ball back with just over two minutes left in the first half and a 27-0 lead, quarterback James Morgan calmly led the Panthers down the field and found an open receiver in the end zone with five seconds left to stretch the lead to 34. UMass has now allowed points in the final two minutes of the first half in five of its six games; in the sixth, against Akron last week, the Minutemen surrendered a touchdown with 2:02 remaining in the half.

UMass will be back on the road next week against Louisiana Tech to try to turn things around before a bye week.